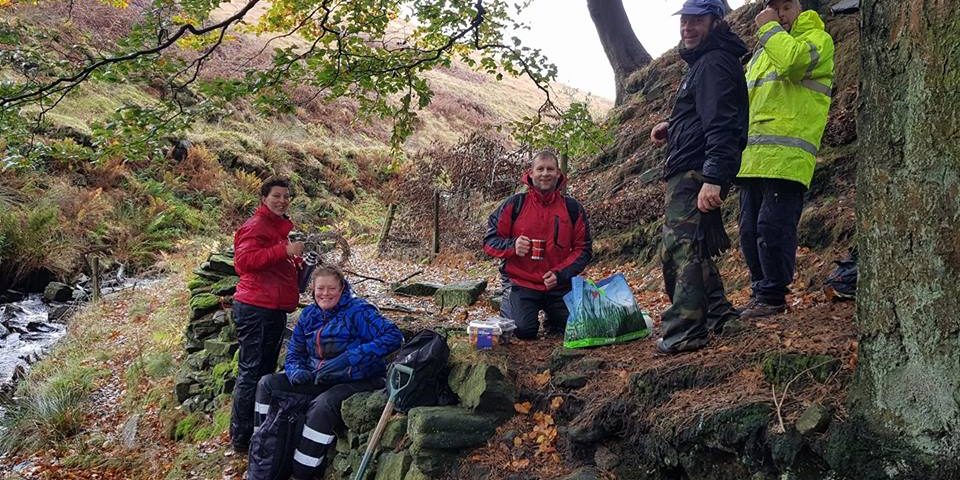 The convergence of the Cheshire, Staffordshire and Derbyshire county boundaries within the Peak District National Park is known as Three Shires Head, which also lends its name to the superb rocky ridge road that spans the Dane Valley at that precise point.

The High Peaks & Potteries regional group recently repaired Three Shires Head for the benefit of everyone.

Here’s what TRF member Mike Price had to say about their work:

After our successful drainage works at Cumberland Cottage last year, High Peaks and Potteries member Pete Potts was asked by Peak Parks Conservation Volunteers if the group would do some more again this year.

Following discussions, it was decided that the Three Shire Heads road could do with a bit of fettling.  The road is one of the many ancient roads in the Peaks, with a bridge over the River Dane at the confluence of Cheshire, Derbyshire and Staffordshire.

The road is closed to four-wheelers, but in both directions is a lovely rocky slope down the valley side to a waterfall and bridge, followed by a climb up across the valley’s opposite side.  The scenery is typical Peak District – wild, with a few trees, and the river babbling over the rocks and falls in the valley. 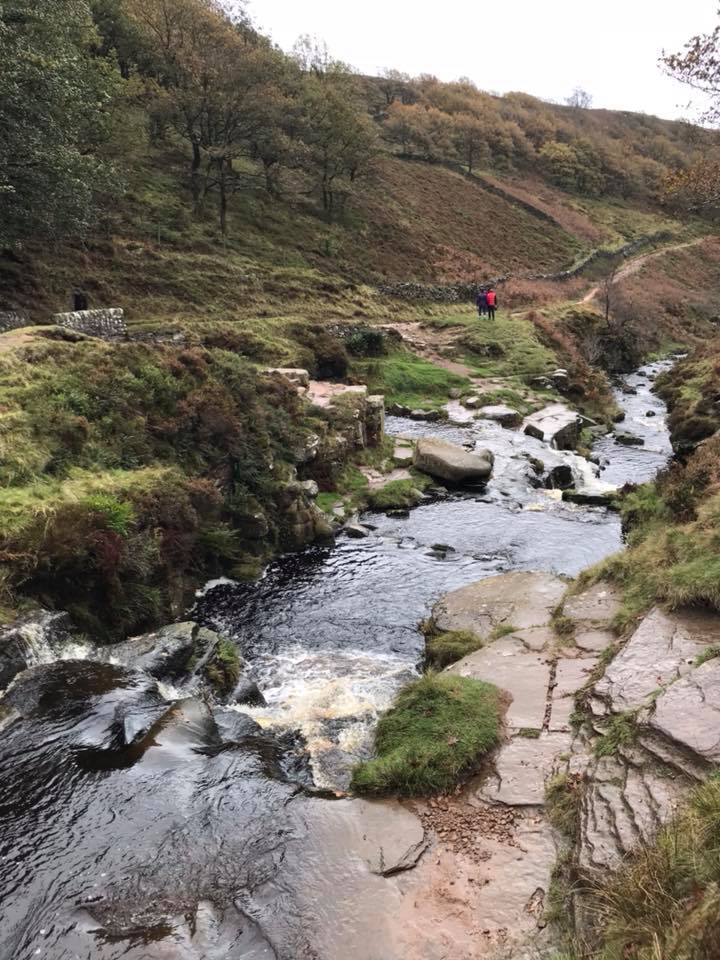 Looking south from the bridge back along the valley road.

We met up with the Peak Parks Volunteer Rangers at their base near Tittesworth Reservoir before piling into their 4×4 Sprinter van, driving to the start of the road and walking for fifteen minutes down to the bridge.  The valley road itself isn’t wide enough for a 4 wheeled vehicle, let alone a long wheelbase Sprinter! 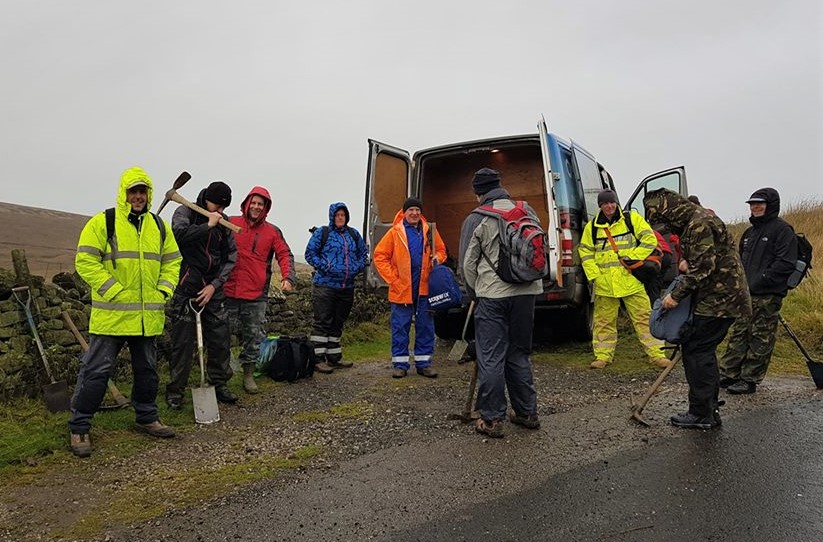 The roadmakers tool up for the day’s work.

All was calm as we unloaded spades, pickaxes, pinch bars etc., but the heavens soon opened in a way that was true Derbyshire as soon as we closed the van doors.  We donned waterproofs and split into two work parties – one to repair erosion to the bridge entrance, and the other to drain a large, deep puddle half way up the valley.  The puddle had existed for quite some time, and was troublesome enough for walkers to have made an ‘alternative’ path in order to avoid it. 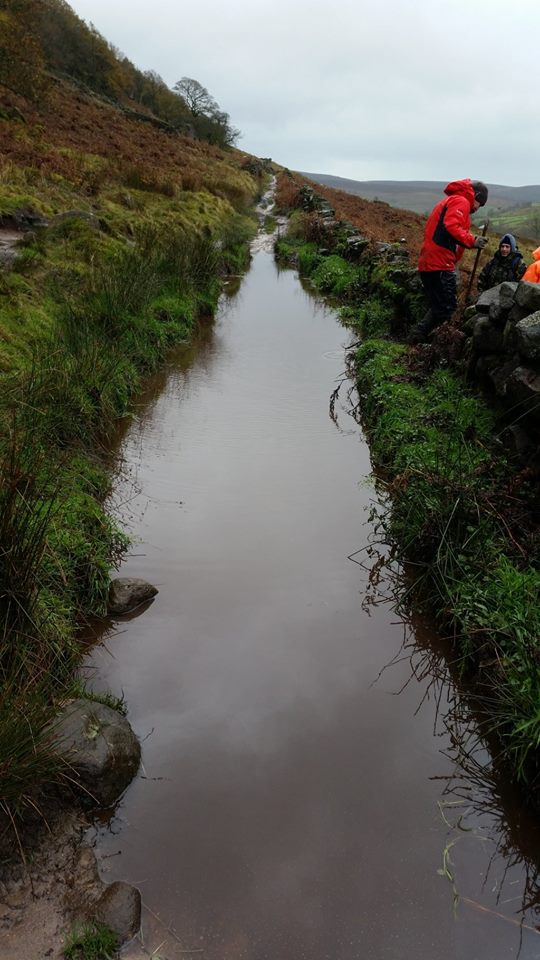 The puddle before drainage works began – not much fun for walkers!

The dry stone wall beside the puddle had fallen down, leaving a gap.  We attempted to drain the puddle by thrusting the pinch bar under the collapsed wall, but our drainage channels were soon blocked by silt – clearly a more substantial solution was needed.

We decide to take the wall down, build a wider drainage trench and rebuild the wall (including the fallen section) on top of it. This trench allowed hundreds of gallons of water to cascade down the hillside towards the river, which helpfully washed the stones we had placed there to rebuild the wall with.  The national park ranger was most impressed! 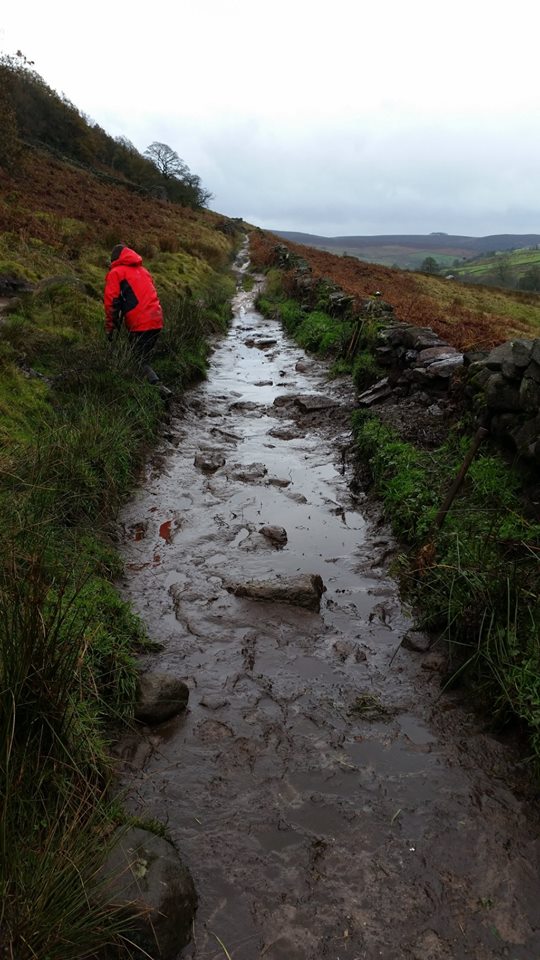 The road looking much better for drainage works. 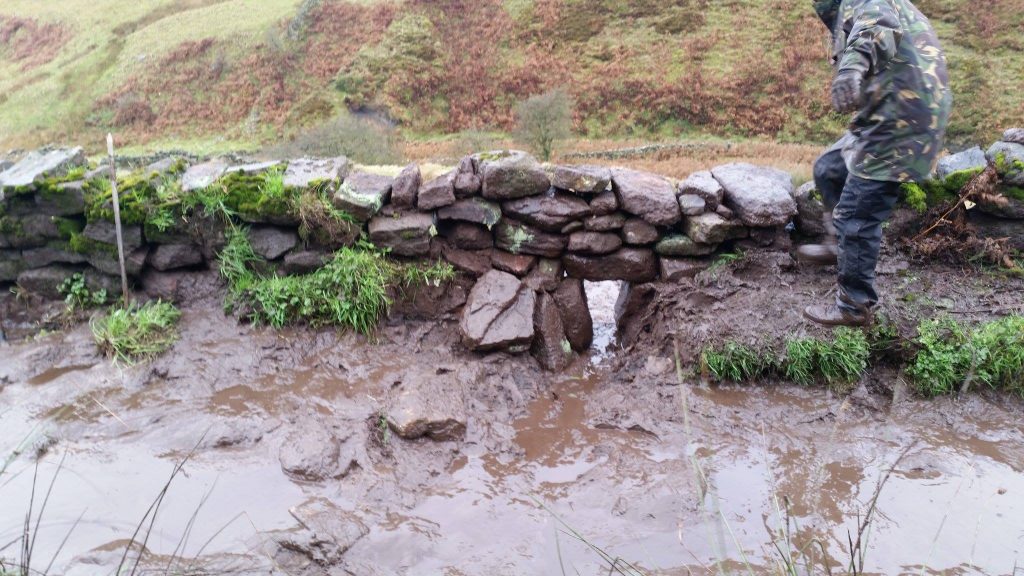 Meanwhile, the other party had been scavenging and scrounging for stone to repair the entrance and exit to the bridge, where erosion had created a substantial step.  The rain was coming down near horizontally, but the party dutifully built the ramps, before filling them with spoil to bind everything together whilst others drained smaller puddles on both the road and adjacent footpaths 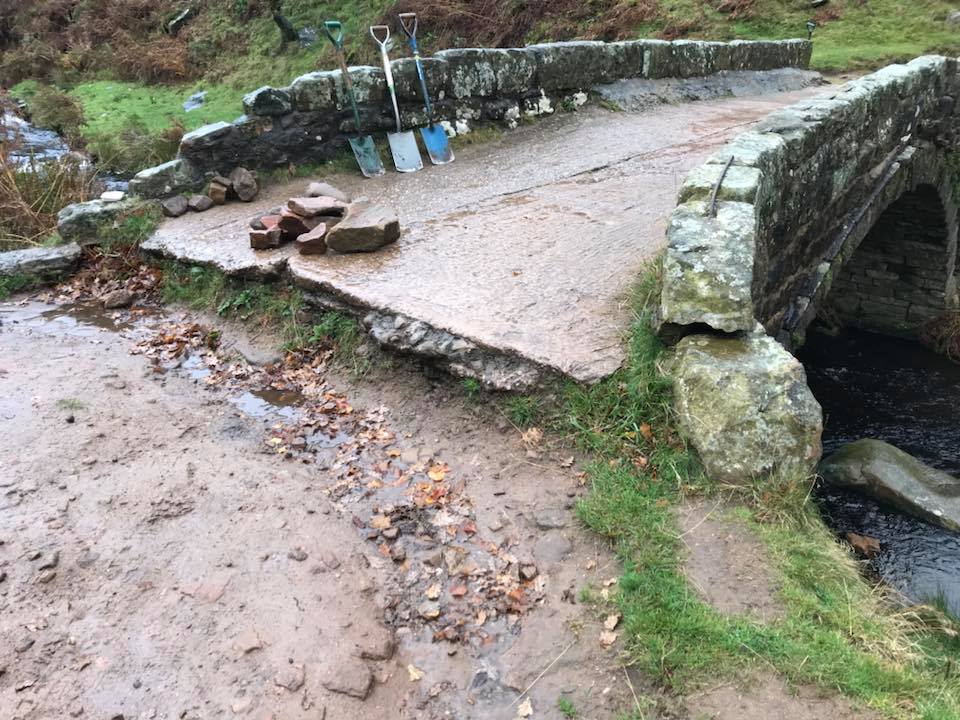 The bridge before works… 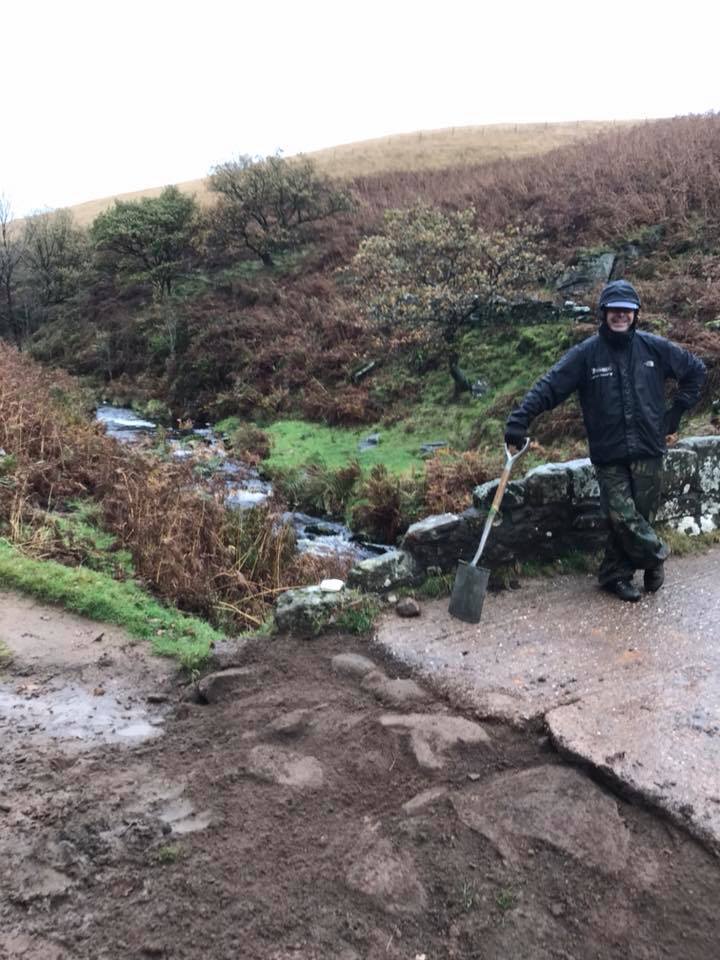 …and afterwards.  Much better.

Eventually we completed our tasks, the rain eased off and we agreed that we’d had a lot of fun and lots of laughs, even if the walk back up the hill to the van did get me puffing and panting – it’s a lot easier to ride up than it is to walk up whilst carrying tools! 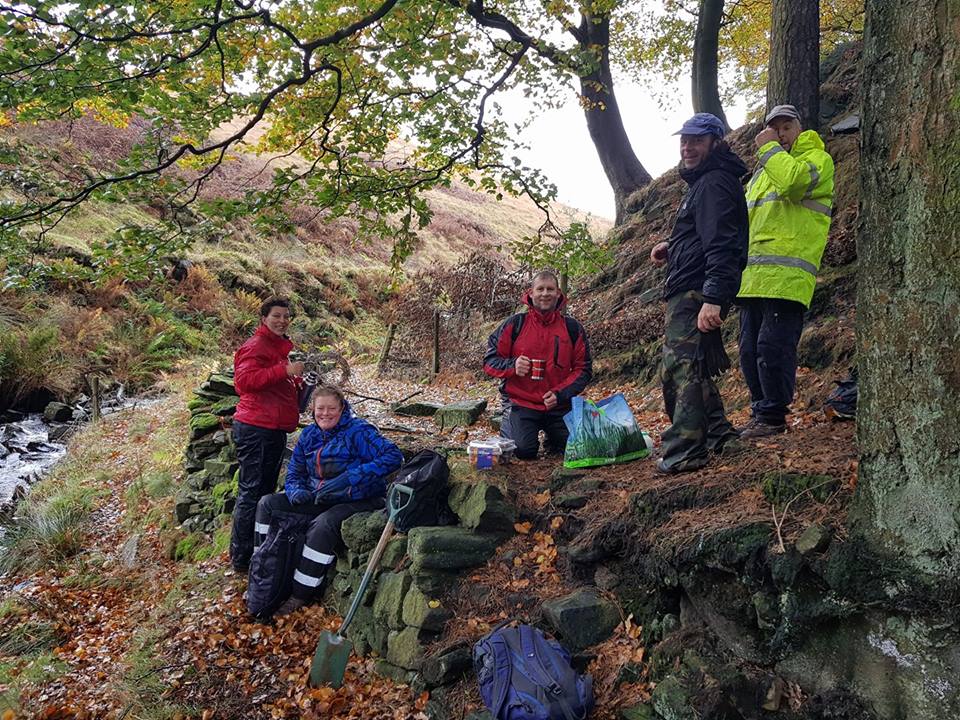 The national park rangers were very happy with our work and we all look forward to working together again next year, though hopefully without the interference of Storm Brian!

Have you helped maintain a green road?  Let us know so we can help publicise your good work.