I thought I knew a fair bit about the ecology and archaeology of Wiltshire, having spent a lot of time exploring the many well-preserved sites that form this important part of our cultural legacy. 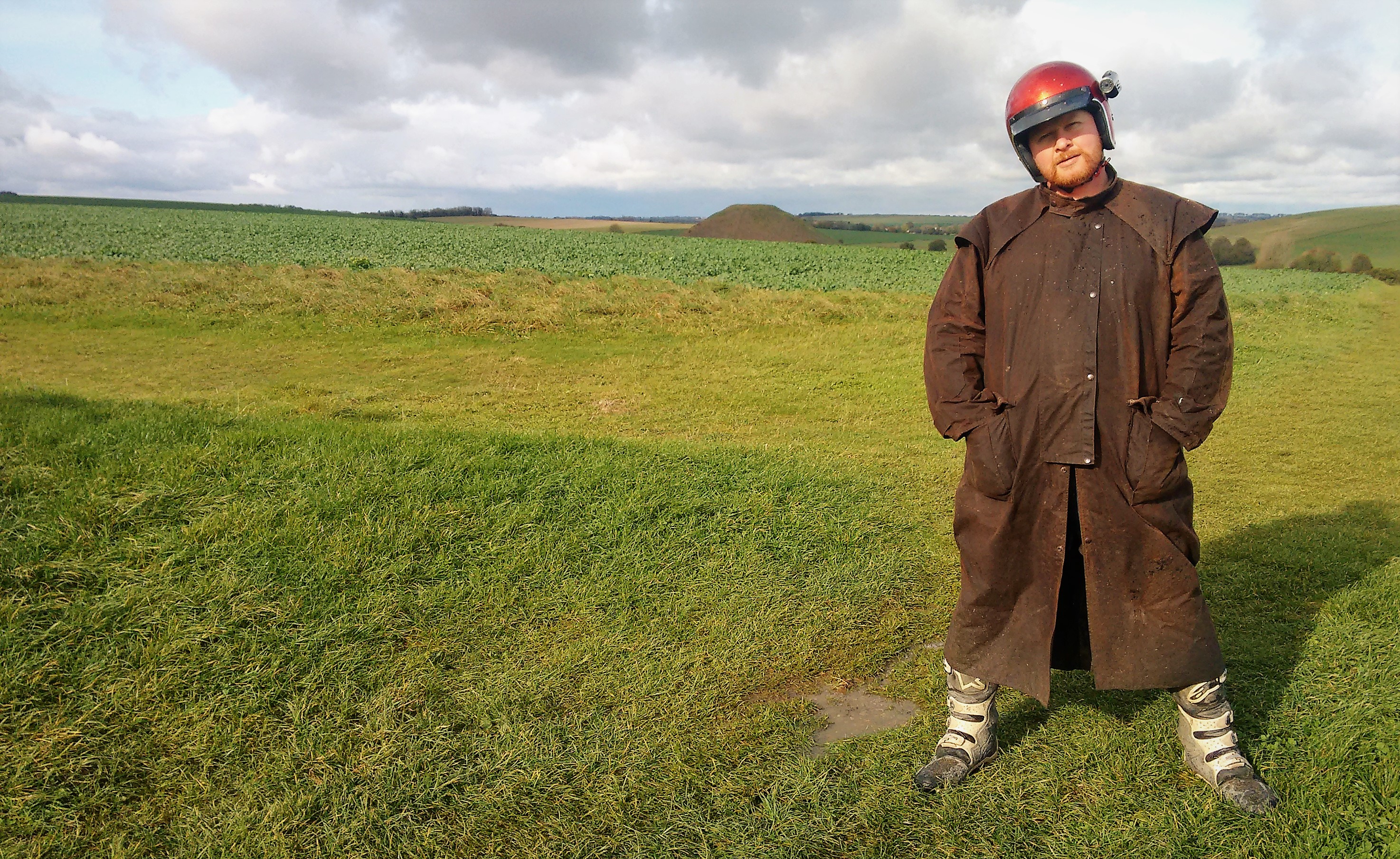 Jimmy Know-it-all? Not so!

However, my knowledge pales in comparison to that of Amesbury-based motorcyclist (and fellow Moonraker) Keith Dobson, who recently took members of the Wiltshire group out on a guided tour of both the Vale of Pewsey and the Stonehenge, Avebury and Associated sites – the latter of which being inscribed as a UNESCO World Heritage Site in 1986. 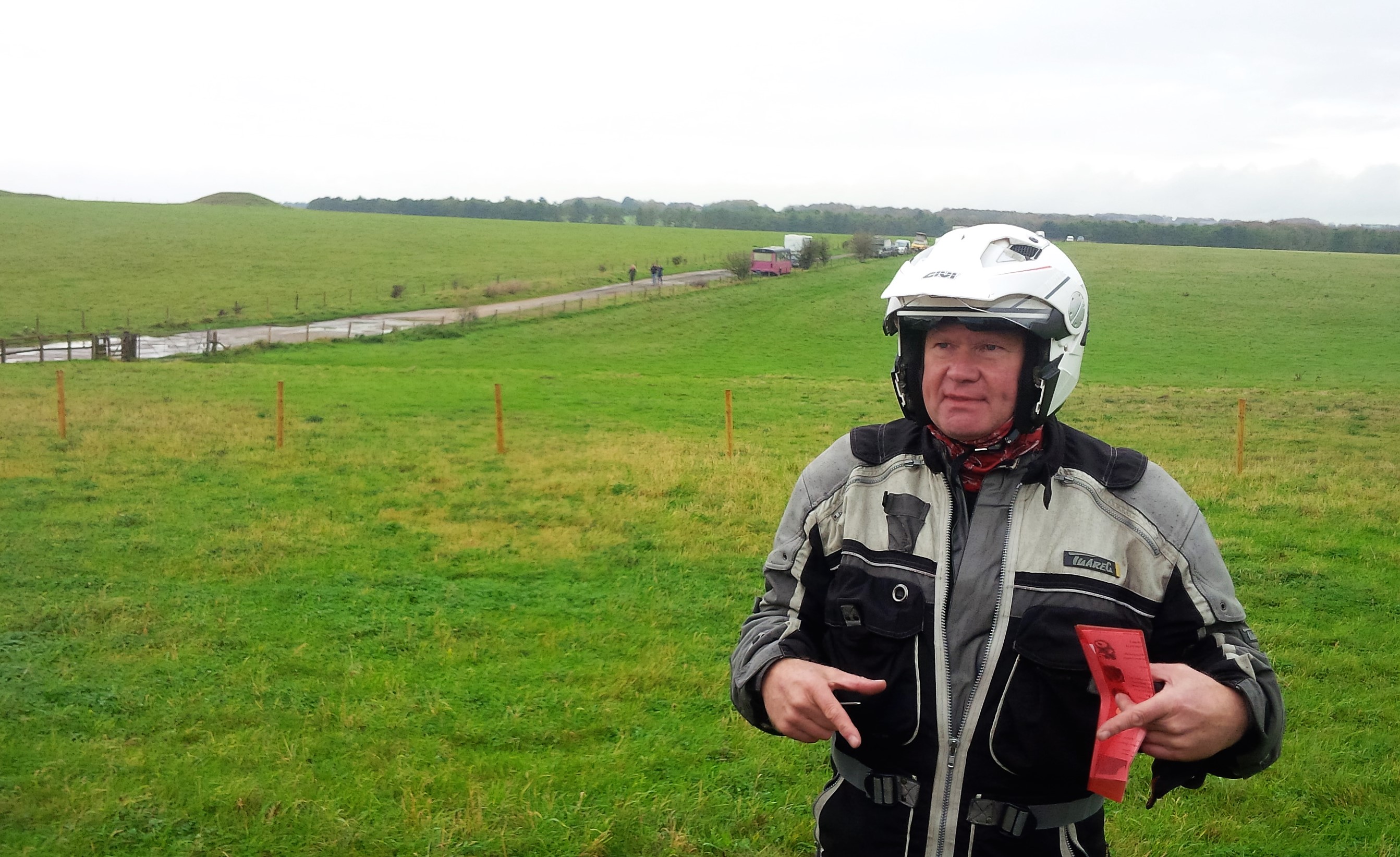 Keith uses the green road network to explain the importance of the area to prehistoric man.

Having mustered at Stonehenge, Keith began our tour by explaining the significance of both Mesolithic post holes and tree throws in relation to recent finds near the River Avon. Keith was able to recite a chronology of nearby monuments, which included Neolithic long barrows, causewayed enclosures and cursus earthworks. After inspecting the site on foot we took the byways north across Salisbury Plain, passing the historic Airfield Camp at Netheravon – birthplace of the world’s first effective air force. 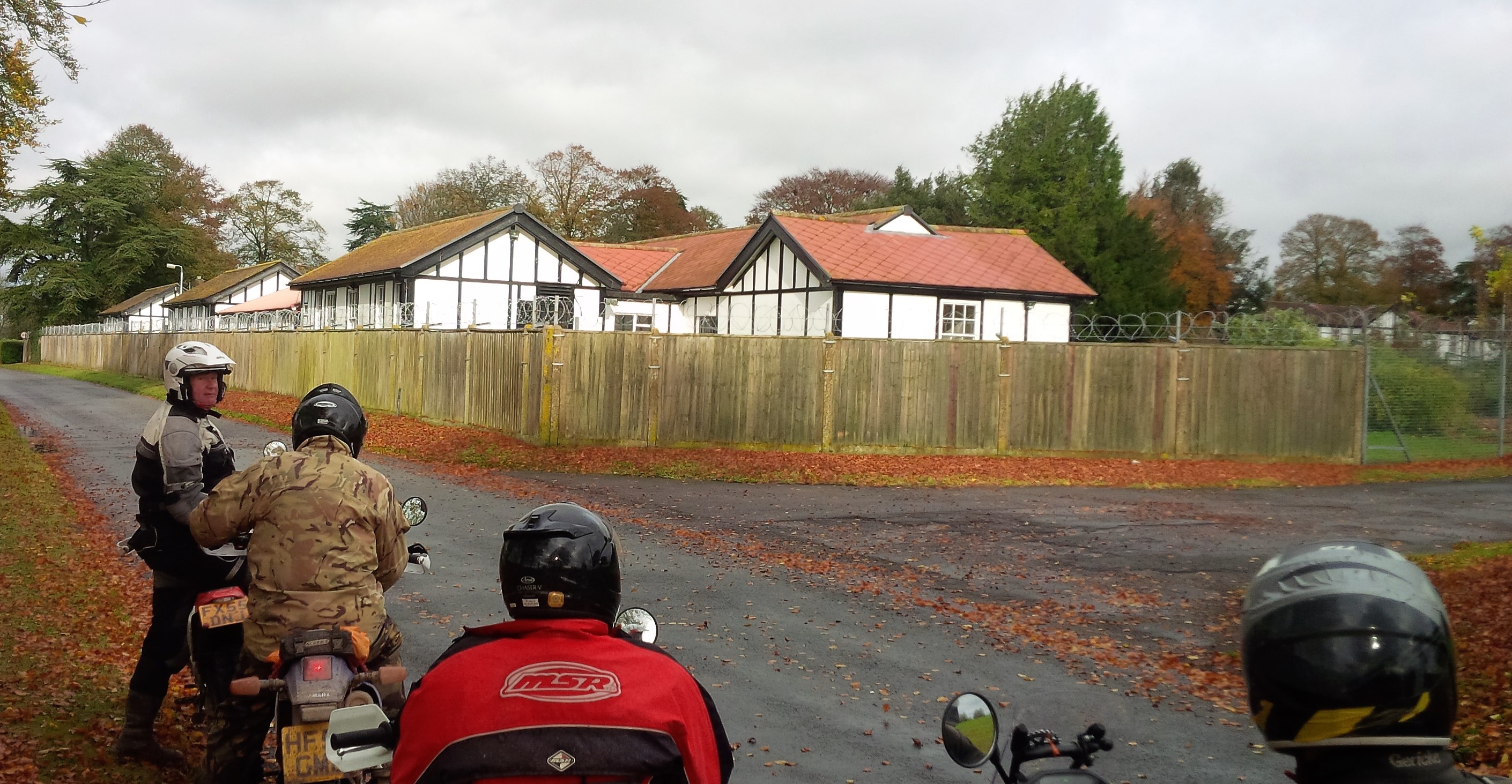 The historic Airfield Camp at Netheravon.

Keith explained that the pieces of sarsen stone aside the road through the villages of the Avon Valley may well have been brought down the nearby river during Neolithic times when watercourses were the main methods of navigation, what with most of Britain still being covered by dense woodland. 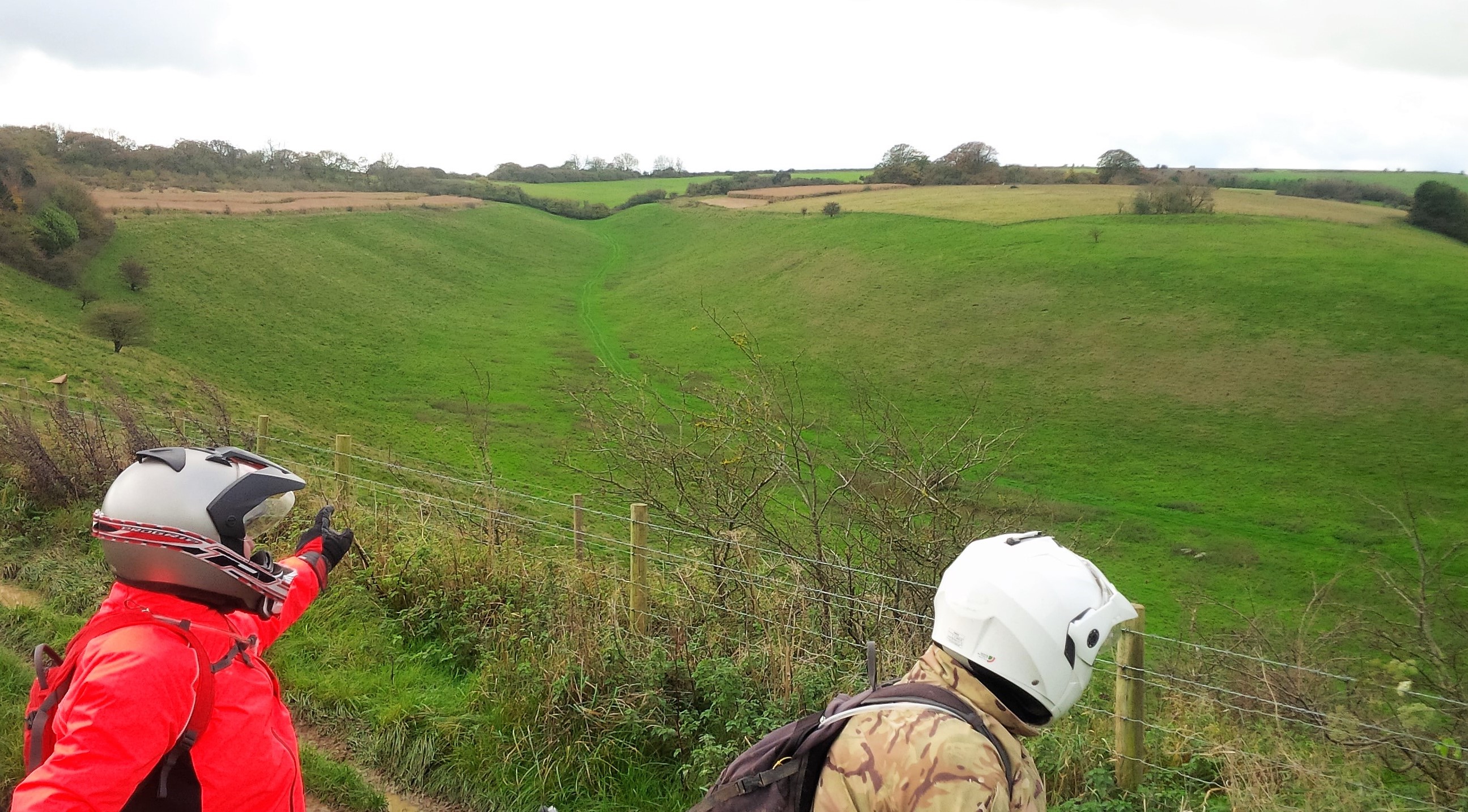 This valley is one of several possible transit routes for the sarsen stones.

We followed the sarsen trail along the Ridgeway byway from Adam’s Grave, where the stones are named ‘Grey Wethers’ on account with their similarity to sheep when observed from a distance. 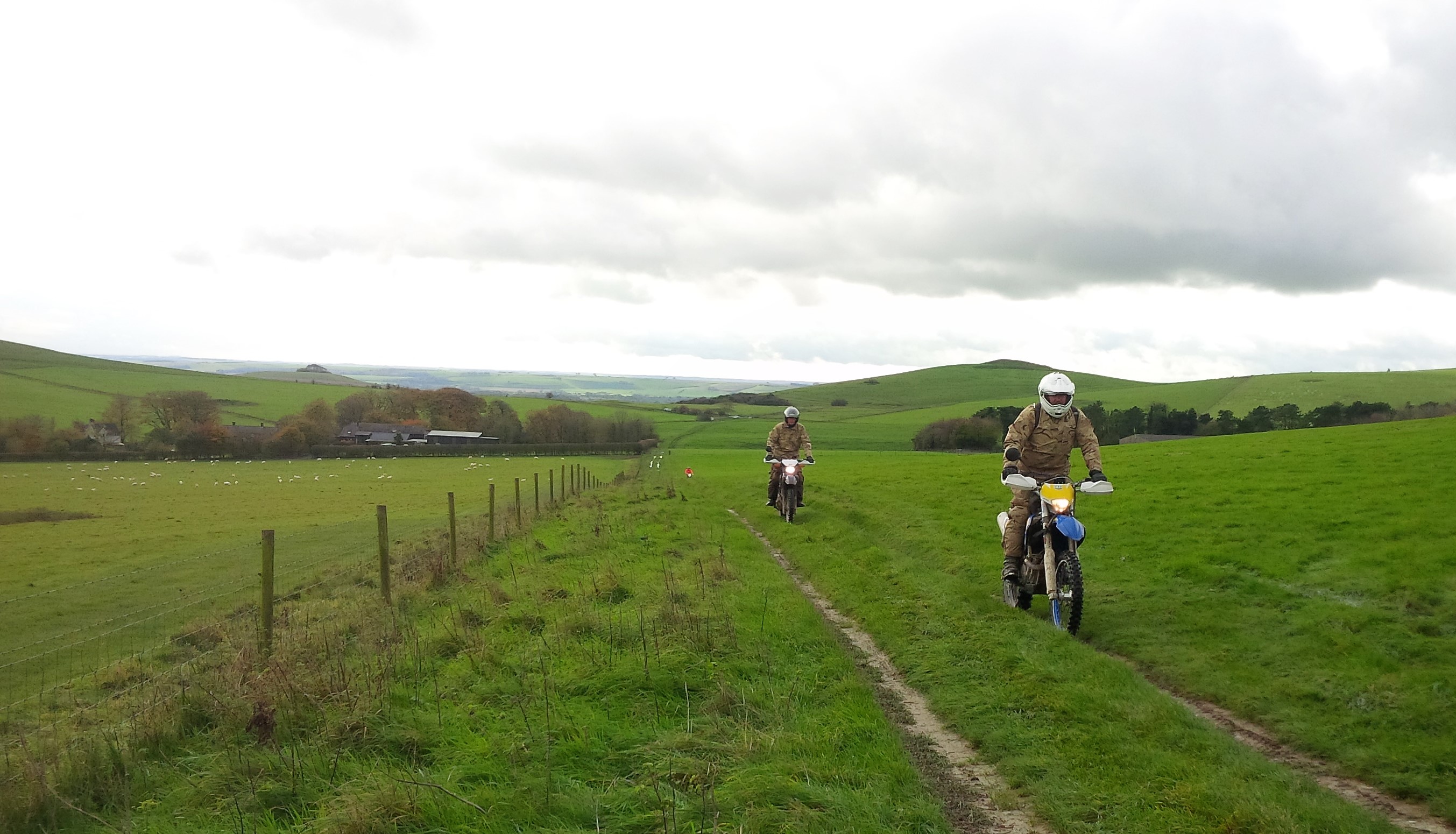 Riding north along the Ridgeway with Knap Hill (L) and Adam's Grave (R) in the distance.

This trail led us to the imposing Silbury Hill, which – at roughly the same size as some of the smaller Egyptian pyramids – holds the distinction of being the largest man-made mound in Europe. A layby opposite the hill enabled us to park our bikes and ramble up to the 100-meter long West Kennett Long Barrow, home to at least 46 burials since its construction in circa 3,600BC. 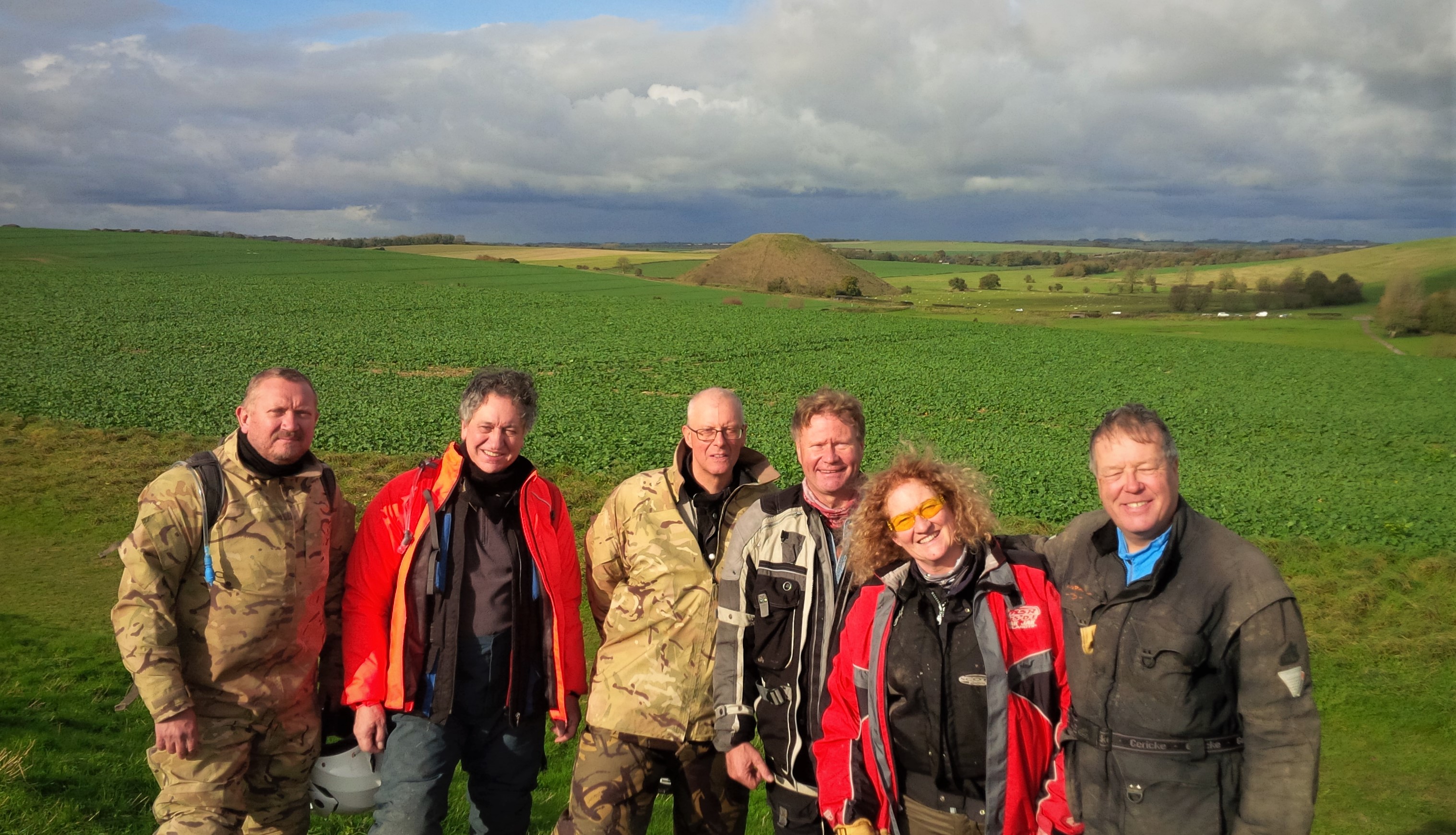 Lunch was taken at Circles Café, operated by the National Trust within the enormous stone circle and henge at Avebury. Unlike the better-known Stonehenge, the public are permitted to walk freely through the stone circle and its approach avenue at Avebury, which makes for an enjoyable day out in its own right. 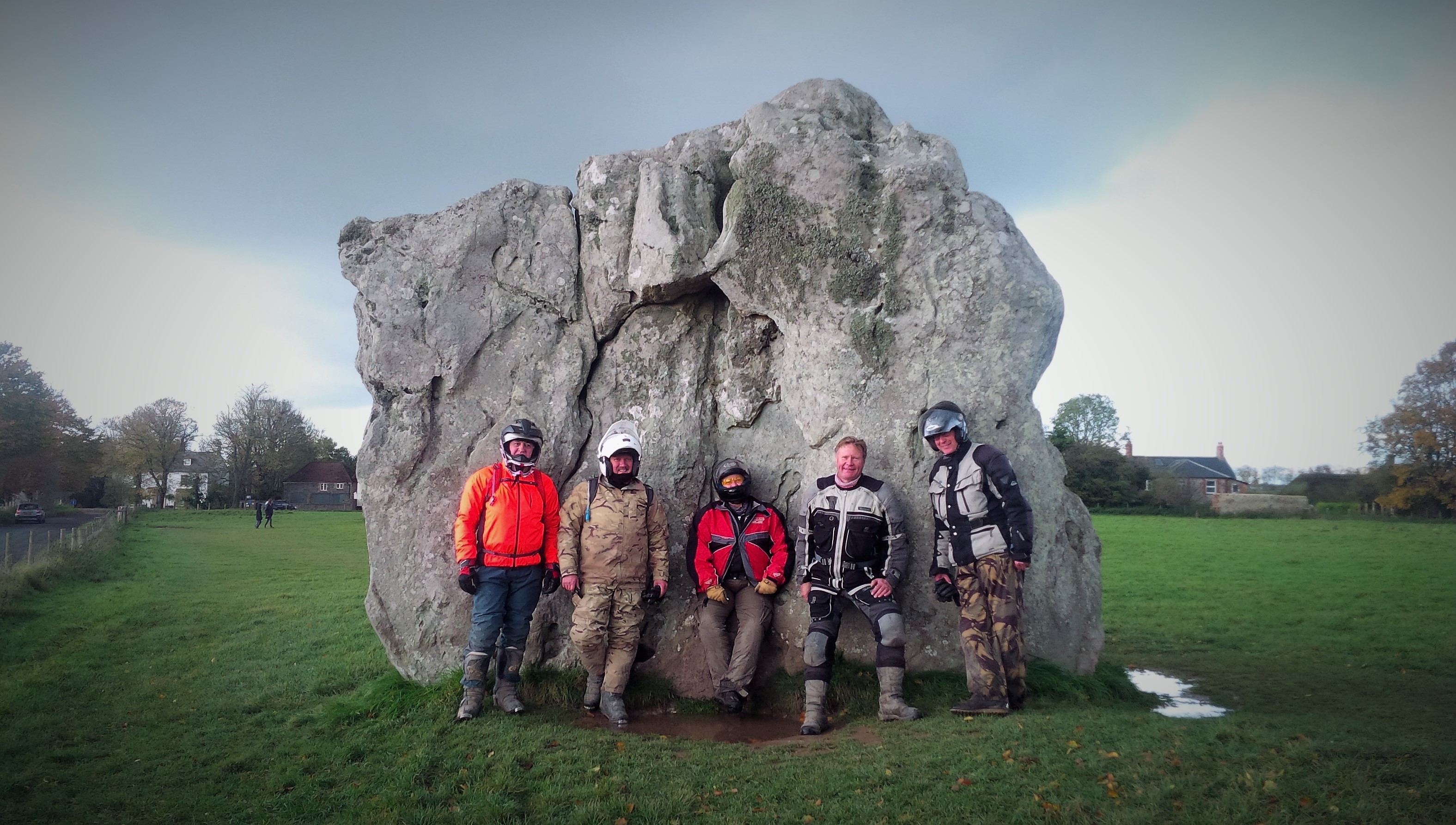 Andrew, John, Becky & Keiths posing by one of the many megaliths at Avebury.

Next stop was The Sanctuary, site of prehistoric timber rings of unknown purpose, Bronze Age barrows, and pottery from the age of the Beaker People. Opposite The Sanctuary is a continuation of the Ridgeway byway – described as ‘Europe’s Oldest Road’ on account of its first known use being over five thousand years ago, when a seasonal TRO was not required to manage its surface condition. 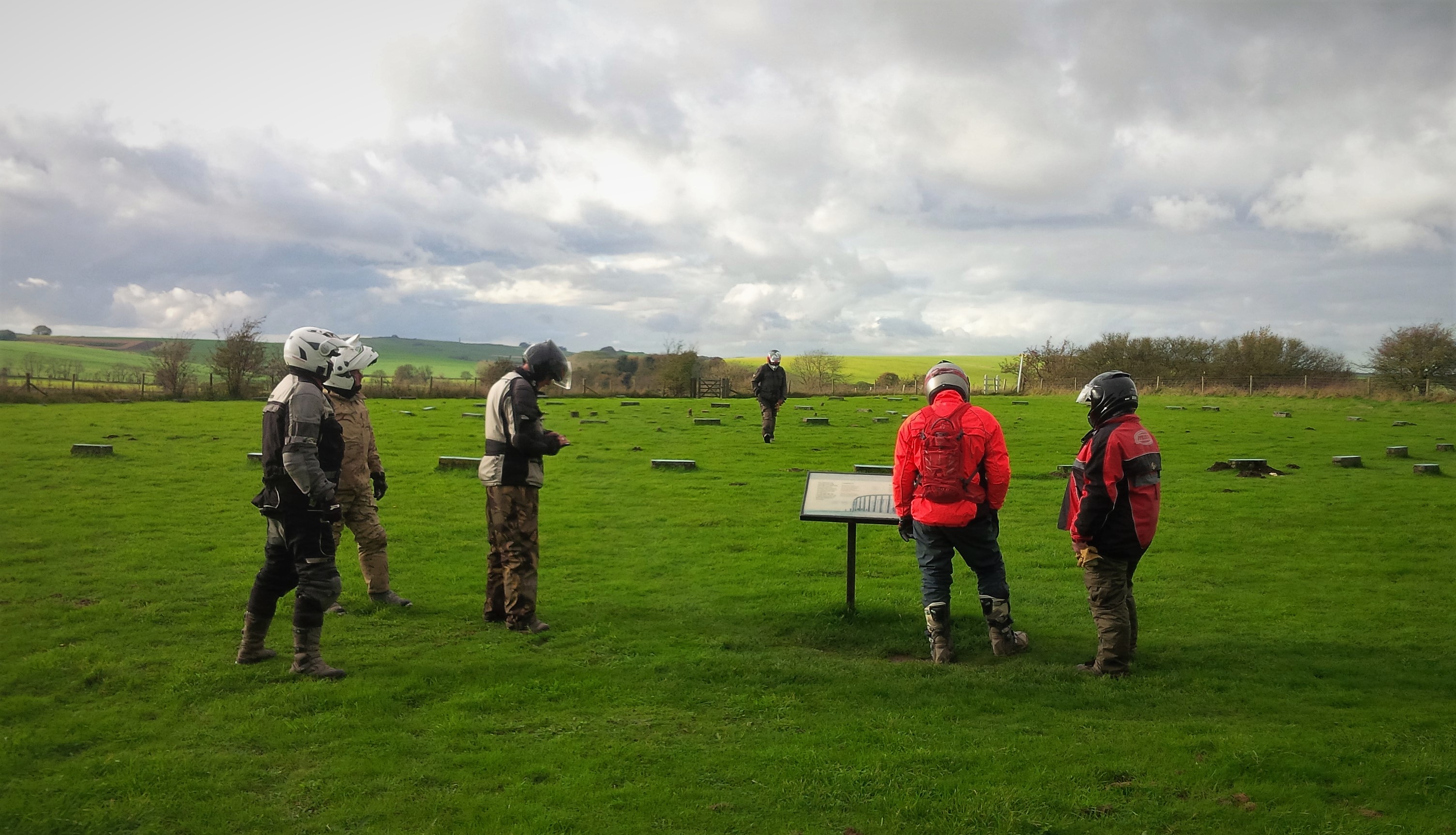 Riders inspect The Sanctuary after a brief introduction from Keith.

Riding along the A4 enabled us to witness more sarsen stones, barrows and tumuli within Fyfield Down, which – like Salisbury Plain – is also an area of unimproved chalk downland supporting several ecologically important species able to thrive due to the lack of modern farming methods. 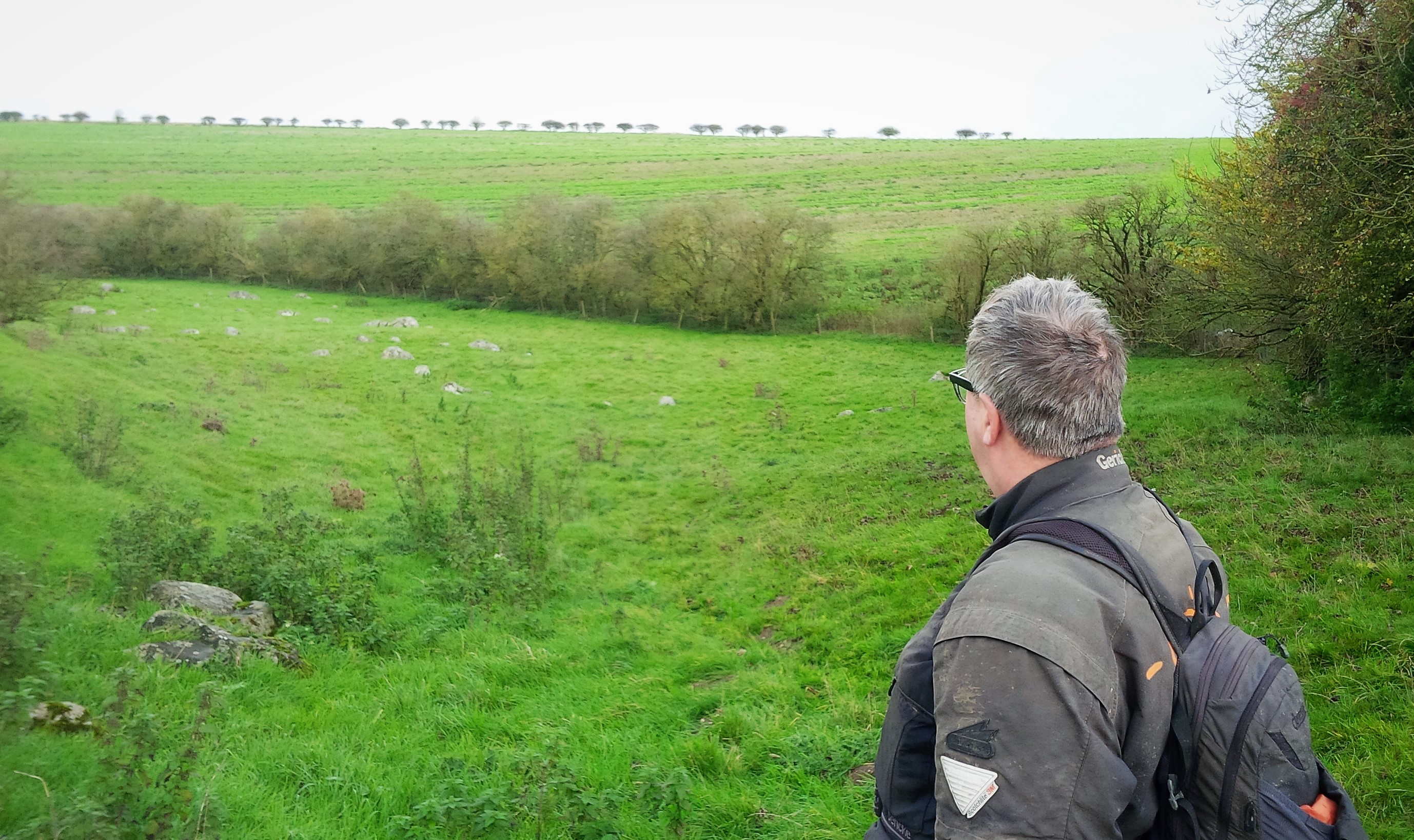 The sarsens of Fyfield Down look a lot like sheep from afar.

We headed south to Marden Henge via West Woods, where we crossed the post-Roman Wandsdyke earthwork. In spring West Woods is home to an impressive display of bluebells, though was only able to offer us a blanket of golden leaves and a few slippery chalk climbs. 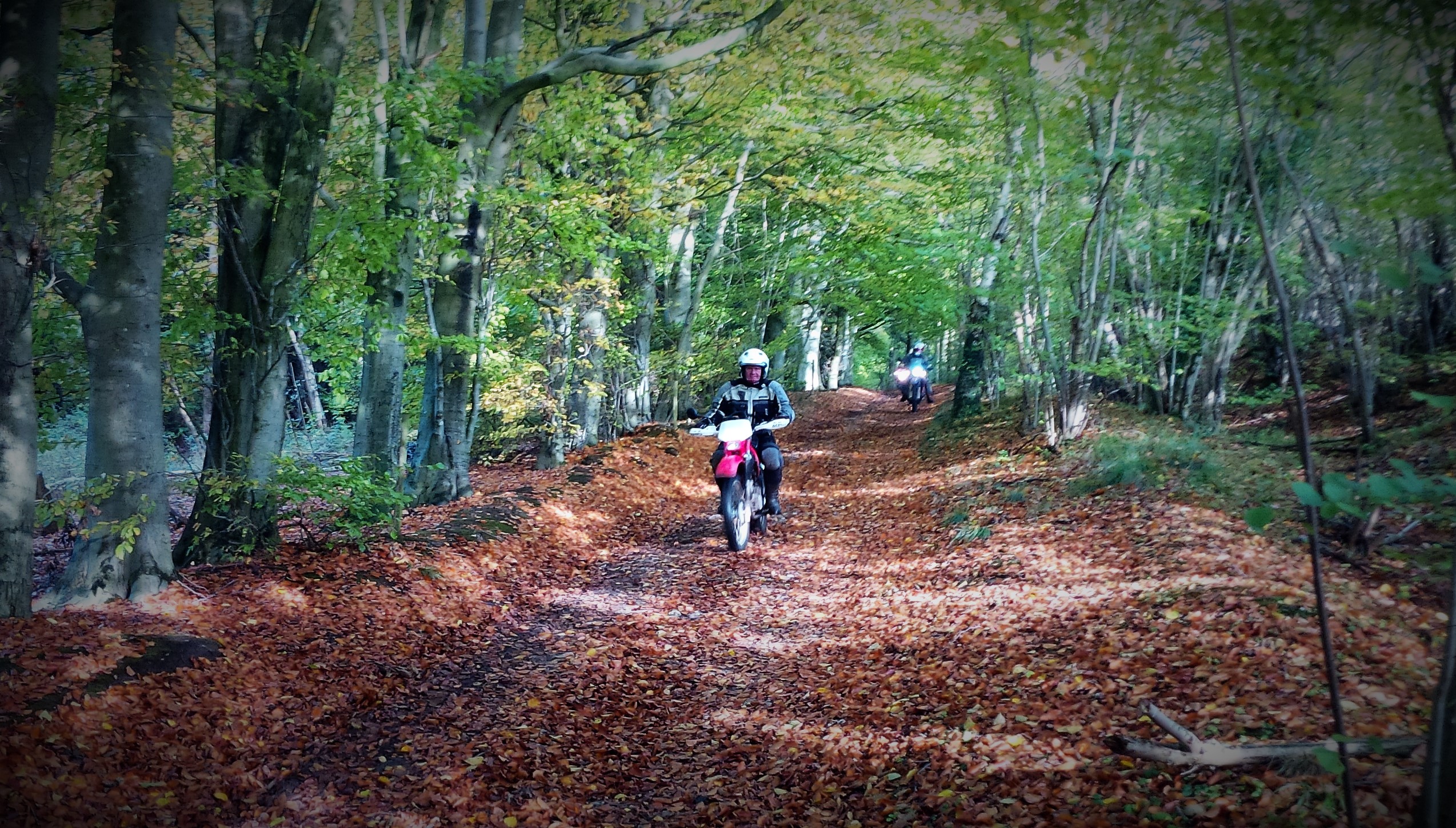 Riding aside Wansdyke through West Woods.

From the enormous Marden Henge earthwork we headed south to the northern escarpment of Salisbury Plain, using the stone ridgeway track to pass alongside the Broadbury Banks and Casterley Camp Iron Age hillforts on our way. 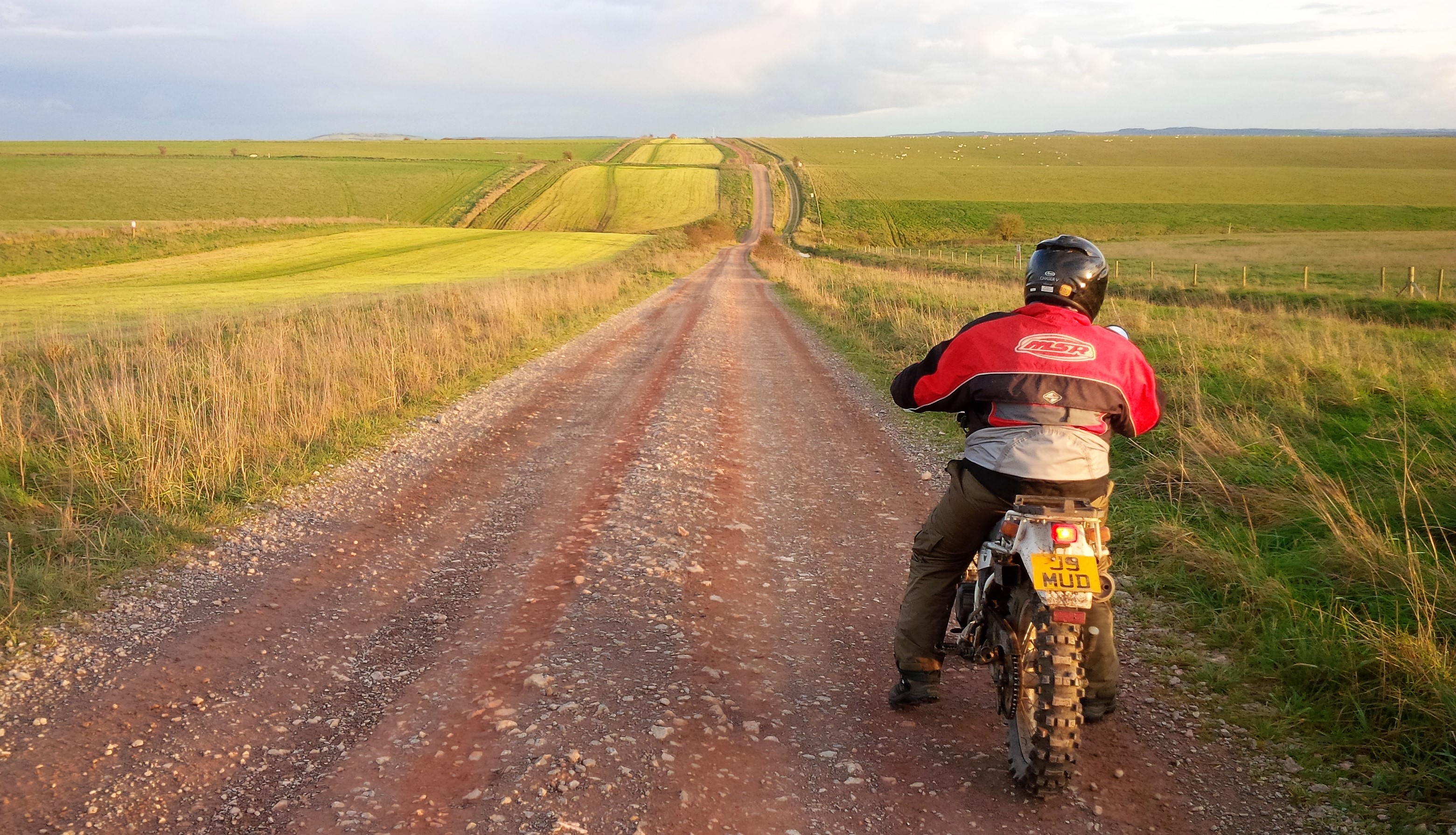 Part of the Larkhill Artillery Range was closed to the public, so we headed to Woodhenge via a short stretch of the A345 instead. The area around Woodhenge, Durrington and Amesbury has supported human existence since the rapid melting of the ice caps after the last ice age – making Amesbury the oldest continuously habituated settlement in the United Kingdom. 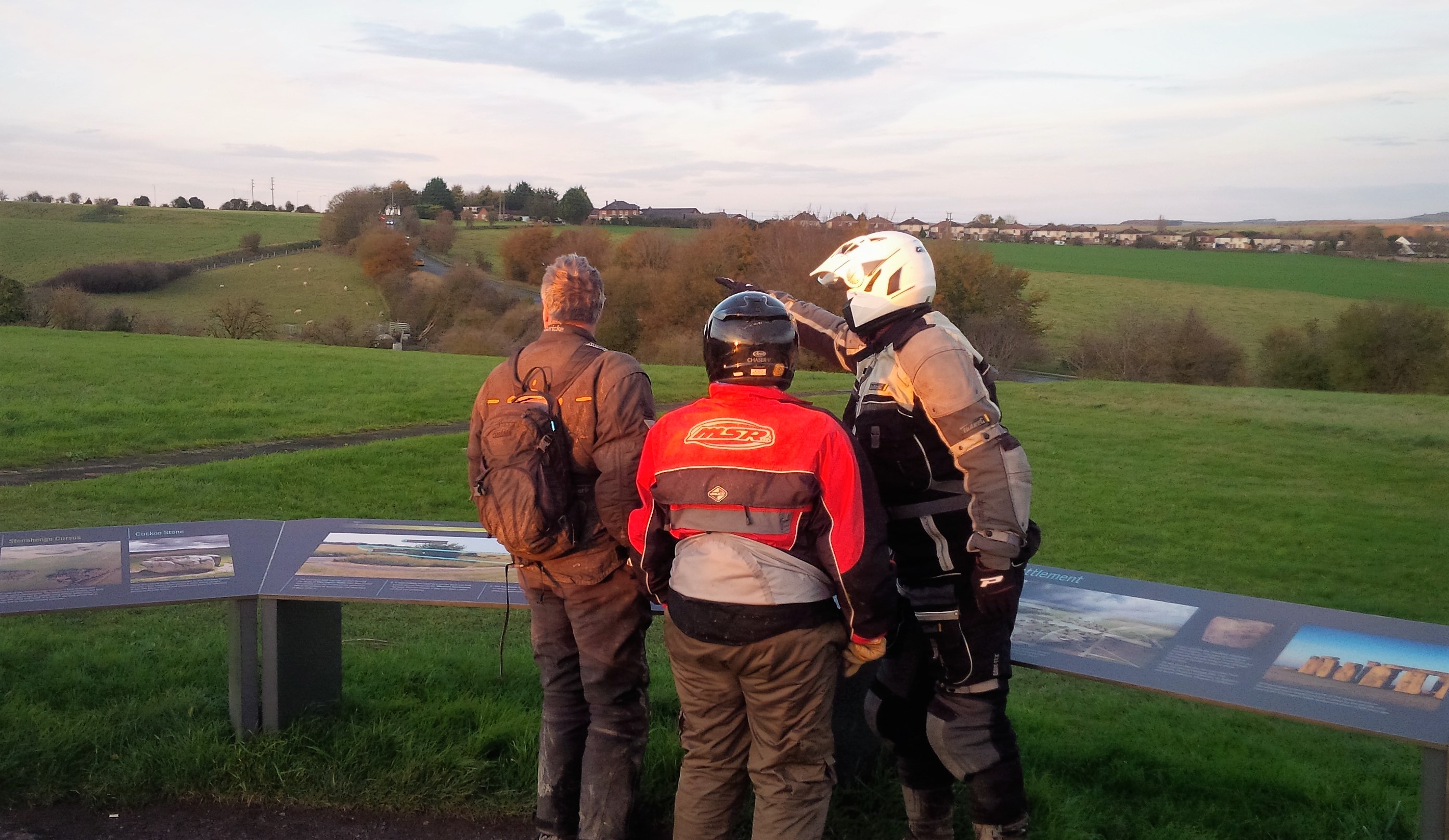 Keith explains the importance of Amesbury to prehistoric man at Woodhenge.

Leaving Woodhenge and Durrington Walls at dusk, we arrived back at Stonehenge in time to witness the sunset from the former A344 road, which is now a permissive path managed by English Heritage. The former A344 is home to a twice-inscribed milestone advising its distance to both London and Amesbury, and also the closest that visitors can get to the stone circle without having to pay. 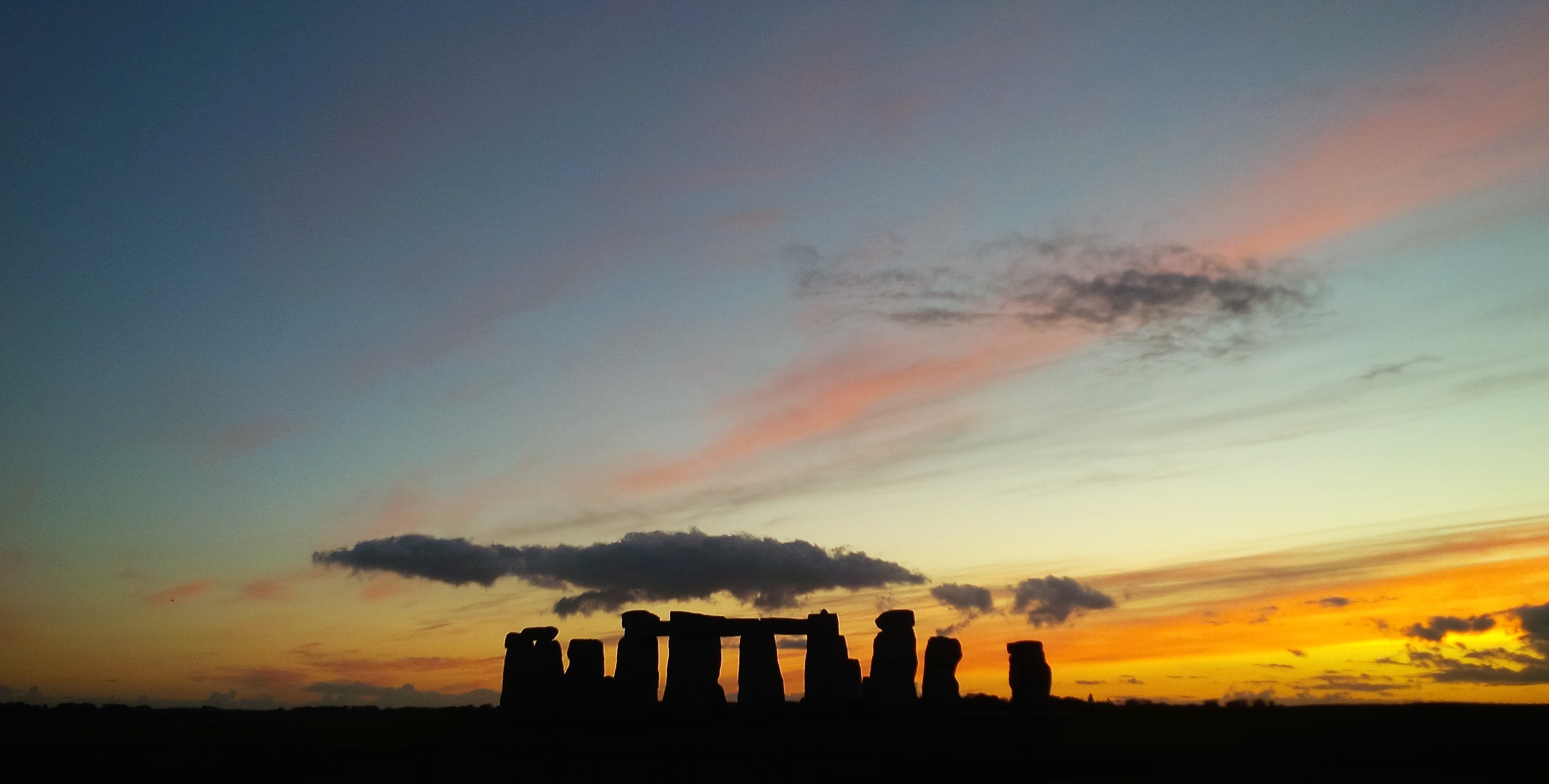 Stonehenge at dusk, taken from the old A344 road.

Keith Dobson’s tour is suitable for most trail and adventure bikes and uses a combination of byways, permissive tracks and minor roads. He makes no charge for his time, though welcomes donations to Amesbury History Centre, which helps tell the story of the town from 8,000BC to the present day, and Tommy’s – a charity funding research to help save babies’ lives. 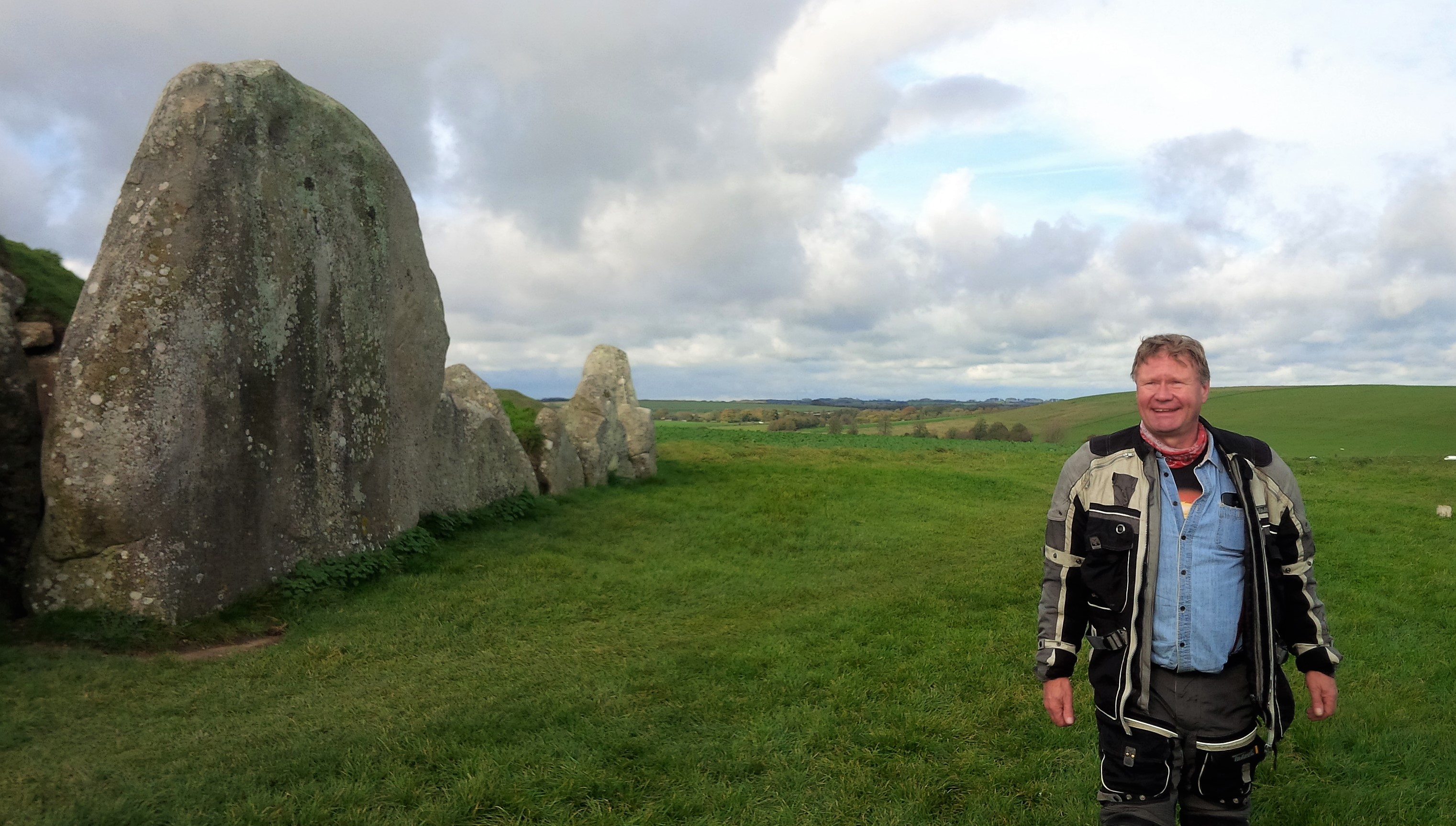 Keith can be contacted via the Wiltshire group.