Allsorts in Morocco: Riding Outside of the Box

Impressed by the resurgent Trail, Sally Pritchard sent us an account of her recent ride through Morocco with a difference: The bikes were all transported there first, enabling her party to ‘fly and ride’.

Over to you, Sally:

Having previously wrestled two heavily laden big bikes (which were additionally encumbered by an ill-considered carpet purchase) around Morocco some years ago, we had always wanted to return on our ‘proper’ trail bikes to truly explore the network of unmade roads and tracks that weave through the country connecting remote settlements with incredible landscapes.

Over the last thirty-odd years we’ve explored much of England and Wales on day rides, but the prospect of going on a true trail riding adventure appealed hugely - it was something different. 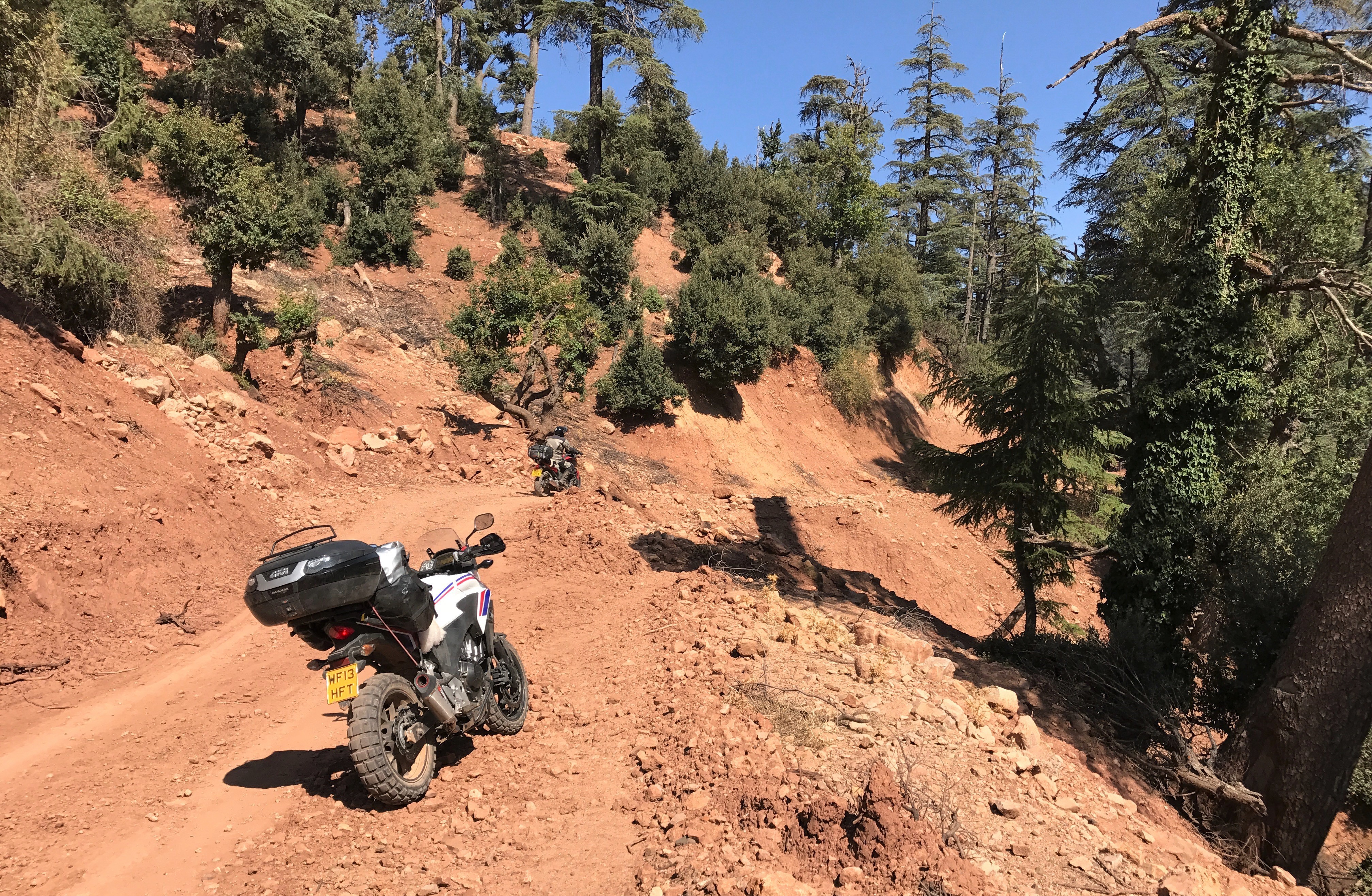 A typical Moroccan unsurfaced road – now just a flight and ferry crossing away!

However, the prospect of two twenty-four hour ferry crossings and two 60mph trips across Spain on a plank-like seat was enough to deter us until earlier this year when a chance encounter presented us with another option - What if our bikes could be transported by road to southern Spain so we could fly in to collect them? Transport would need to be cheap, effective, simple and secure. If achievable, it would save us money, at least six days of annual leave and most importantly - our sanity.

Together with wannabe trail riders Al and Colin (who had never ridden off-tarmac in their lives) we contacted Rob Jones of Fly and Ride. Being a man who counts motorcycles and trucks as life's passions, it's no surprise that Rob moves bikes for a living. Better still, he moves them to Malaga - just seventy-odd miles from the popular and easy gateway to Morocco at Algeciras. 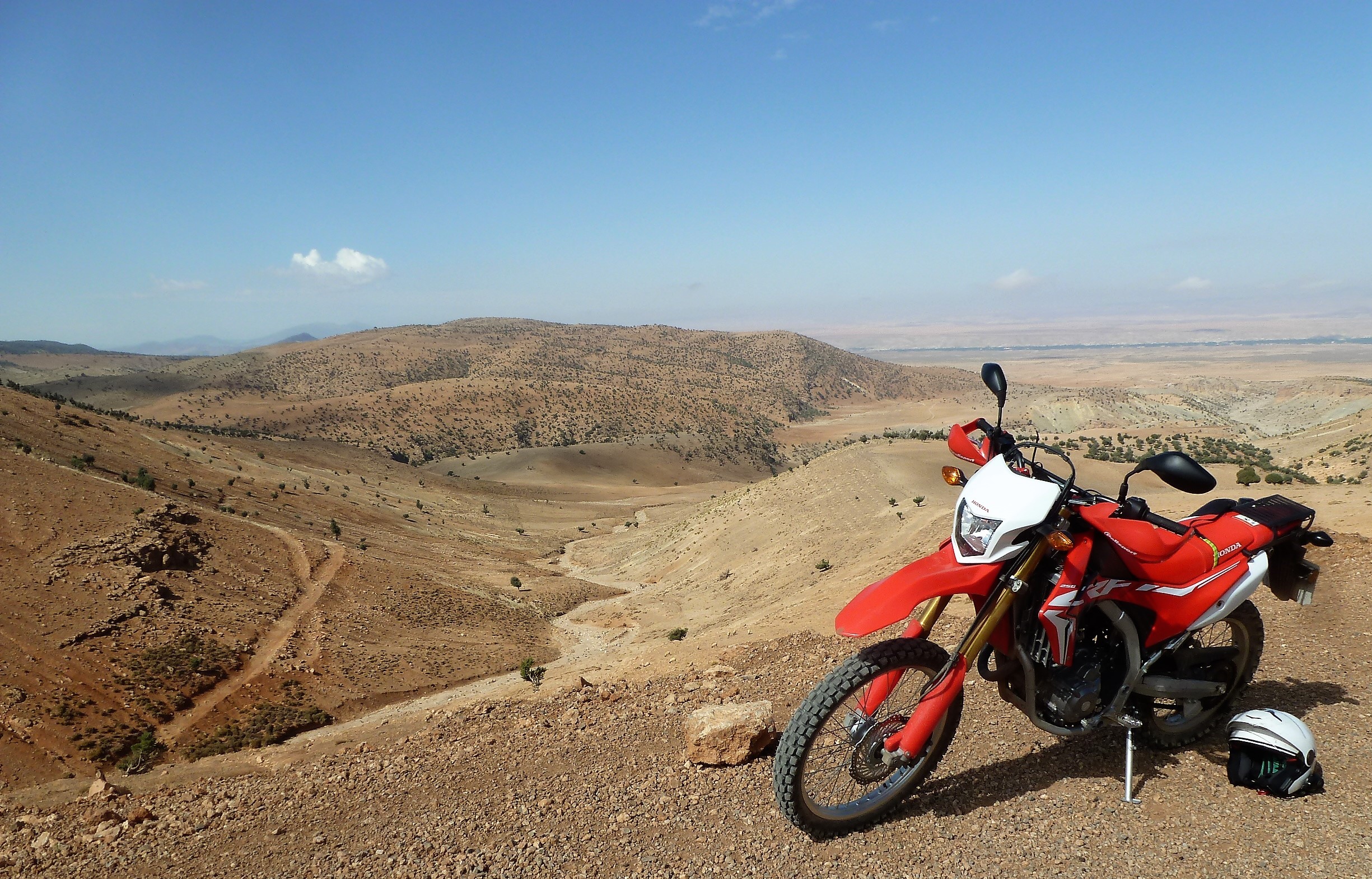 Sally’s Honda CRF250L was well-suited to the beautiful Moroccan landscape.

With the transport all booked we had time to think about which bikes to take. Sticking to (proven) lifelong principles of dull sensibility and a desire to survive any particular day's ride, I chose my Honda CRF250L. Hubby John followed suit with his own CRF – the 1000L Africa Twin (over his far more sensible Beta Alp), the wisdom of which paled against the bikes of our trail riding newbies - Al chose a Honda CB500X and Colin the same Honda NC700X he used for his daily commute along the M5. Experienced adventurers eat your heart out! I don’t think the BMW GS boys on the ferry could quite believe our selection, but it was really a case of using what we had.

Our next challenge was of course where to go? There are many forum-dwelling experts out there but we instead placed our faith in the accuracy of Messieur Michelin’s map (which showed hardly any of the roads we used), a variety of sat-navs (which earnestly attempted to display roads, albeit with about 500 metre accuracy) and adventurer Chris Scott's excellent 2013 book, Morocco Overland. 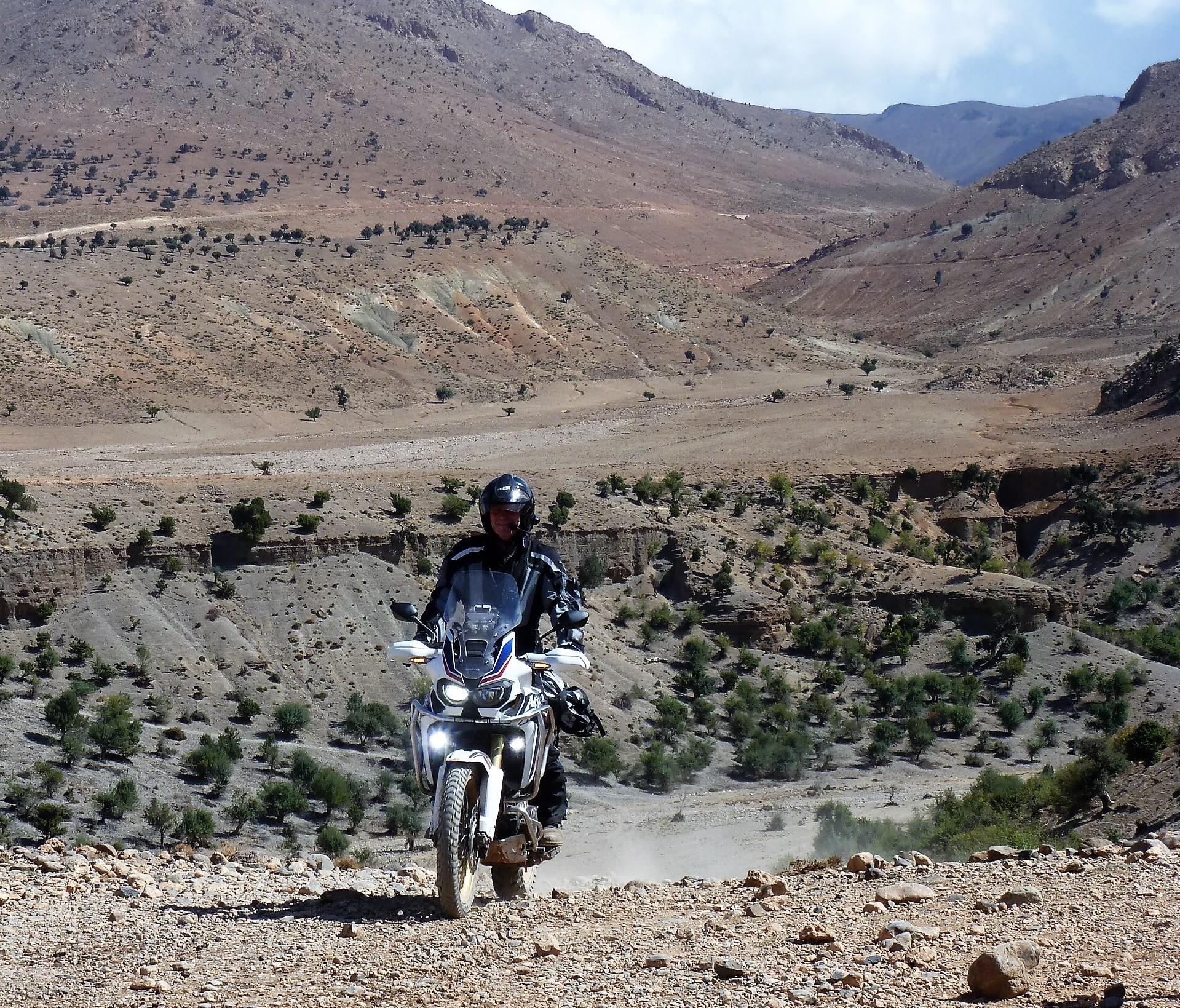 John Pritchard making the ascent out of a valley upon his Honda CRF1000L Africa Twin.

Our route took us south to the Middle and High Atlas, though we would have done just as well heading further south to the sands of the Sahara. With nearly all minor roads remaining unsealed it isn’t difficult to ‘warm up’ to the challenge of some of the more ambitious routes, with fuel, thick strong coffee and the ubiquitous tagine being available in pretty much every settlement. Finding petrol is easy - just ask the locals for essence. After all, they can't run their mopeds or dockers on donkey poo and are always keen to help. 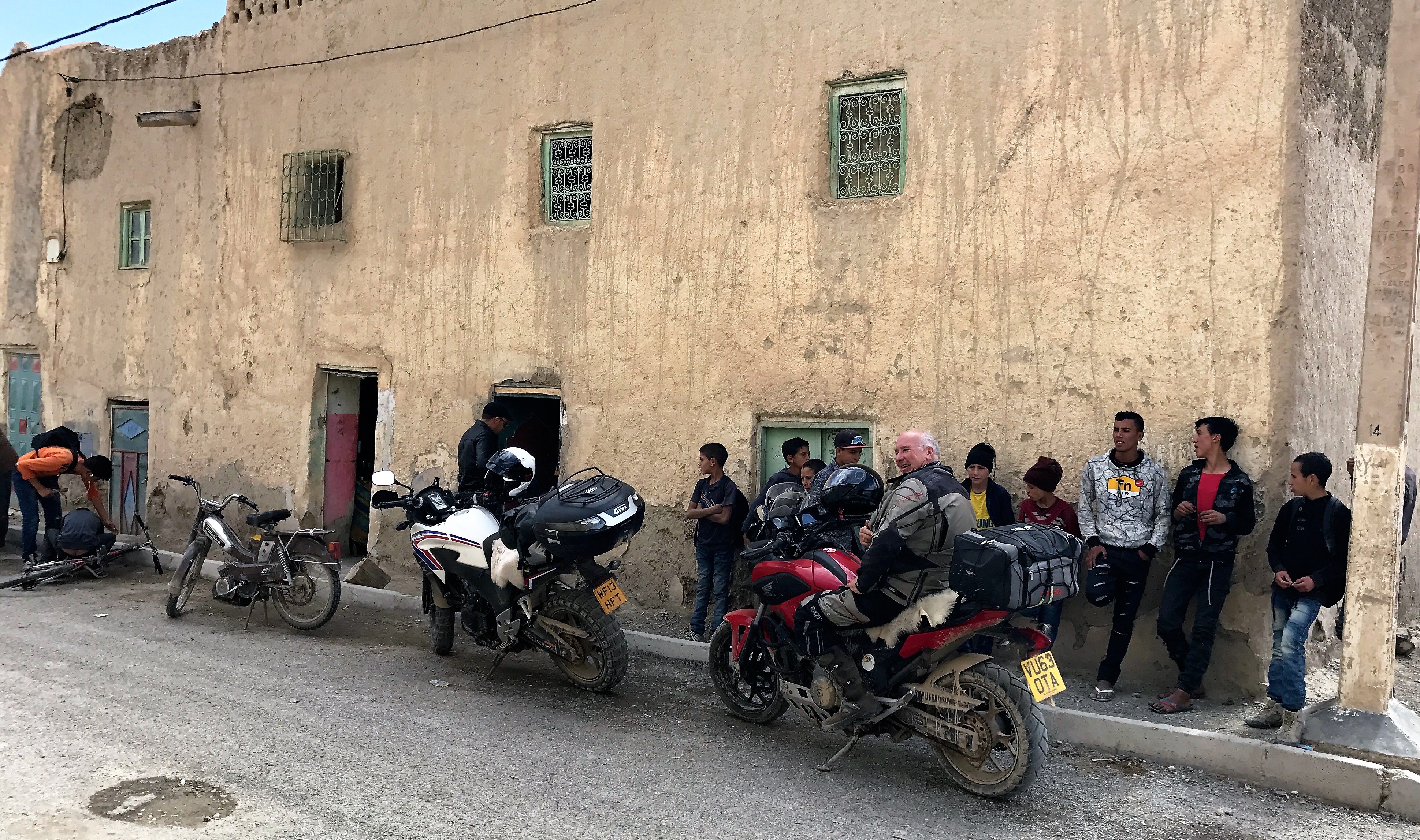 The 'sunshine and sand' impression of Morocco falls a long way short of its real diversity of weather and terrain - October was a great month to visit, with the hotter places slipping below 30 degrees and the cooler ones requiring us to unpack our thermals and waterproofs.

We particularly enjoyed the cedar forest and volcanic landscape of leafy Ifrane with its countless tracks thoughtfully marked out with coloured paint. Morocco being full of surprises, we learnt this is also a ski resort in the winter and boasts enough resident macaques to ensure regular sightings all year round. Astonishingly, the road bikes (especially Colin’s commuter) coped really well with the rocky terrain and all of the bikes were unfazed by the challenge of being ridden slowly through the sand at temperatures in the thirties for most of the day. 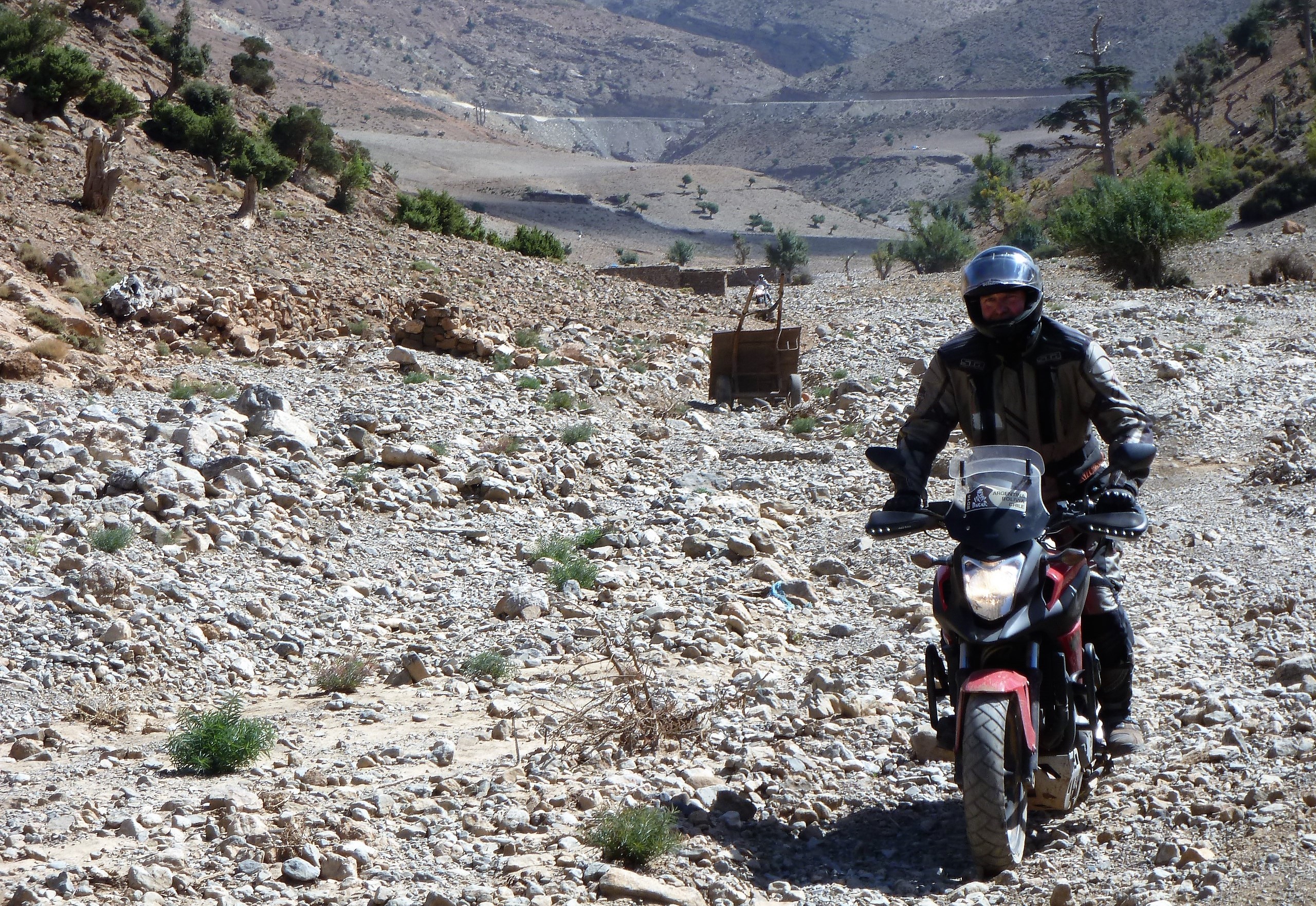 One of our 'must-dos' was to ride the famous Cirque de Jaffar, and although the descent to its valley floor is now largely smooth, the floor remains a rocky jumble, with its ascent out the other side inconspicuous. We ended up riding through the ‘Jaws of Jaffar’ - an extraordinary narrow gorge leading to a steep climb out into the spectacular landscape above.

The cirque might not be quite on the same scale as the Grand Canyon, but it comes close and what’s more - we had it to ourselves. 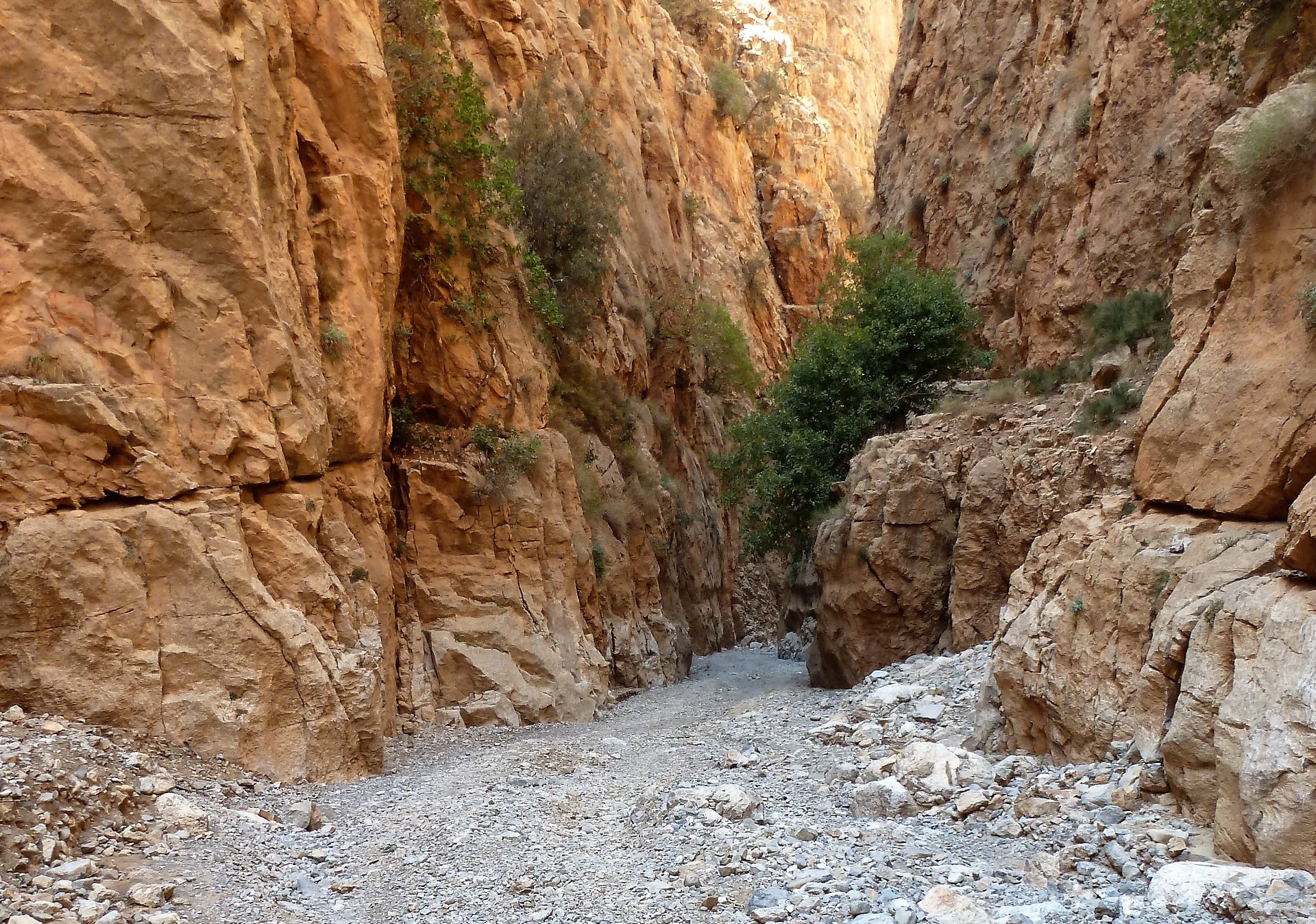 The ‘Jaws of Jaffar’ is a famous pinch-point along the Jaffar Gorge.

The following day we headed for the village of Imilchil in the High Atlas, beginning our day at 08:00 with a fruitless search for breakfast - our only discovery being a few packets of fondant fancies in a garage. Our morning was sunny and warm, though clouds gathered as we made our ascent and by the middle of the day we were relieved to be on schedule to reach Imichil by nightfall.

Being mindful that flash floods are a frequent danger within the area, we nervously progressed through debris that had washed down from the surrounding hills to find that the road had been completely washed away, leaving a massive drop down into the river below. No signs or tape - just a massive drop. 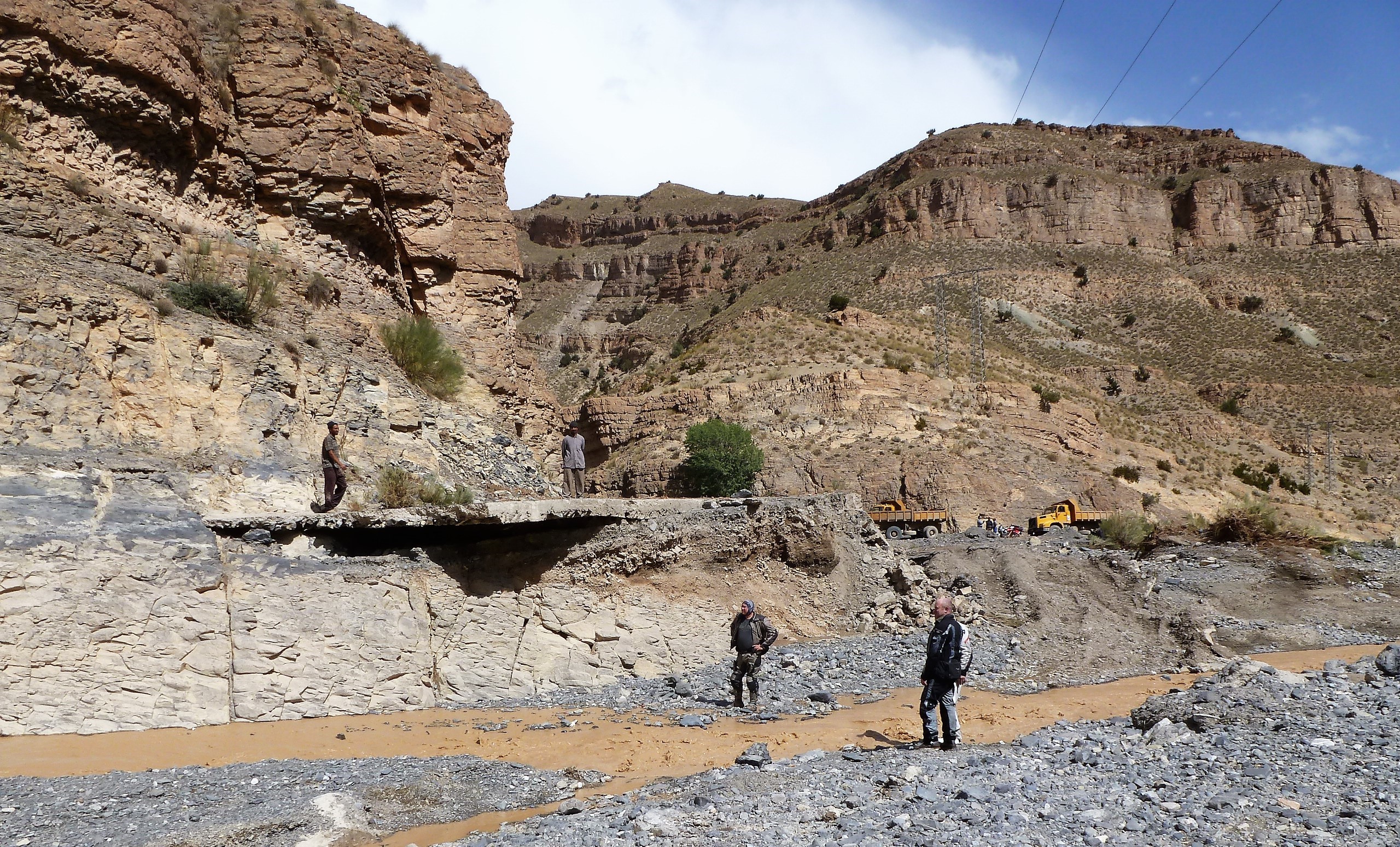 Our circumnavigation skills exceeded all others as we embarked on a diversion of immense proportions in failing light. With little time to stop, we rode on to find that the flooding had washed out entire roads - once rocky river beds now concealed by bubbling water and queues of hapless travellers staring into the torrent.

Whilst river crossings present relatively little challenge for ‘real’ trail bikes, we wondered exactly where the air box breathers were on the two road going Hondas. Thankfully, neither missed a beat and we rode in to Imilchil just in time to see the sun setting over the horizon. 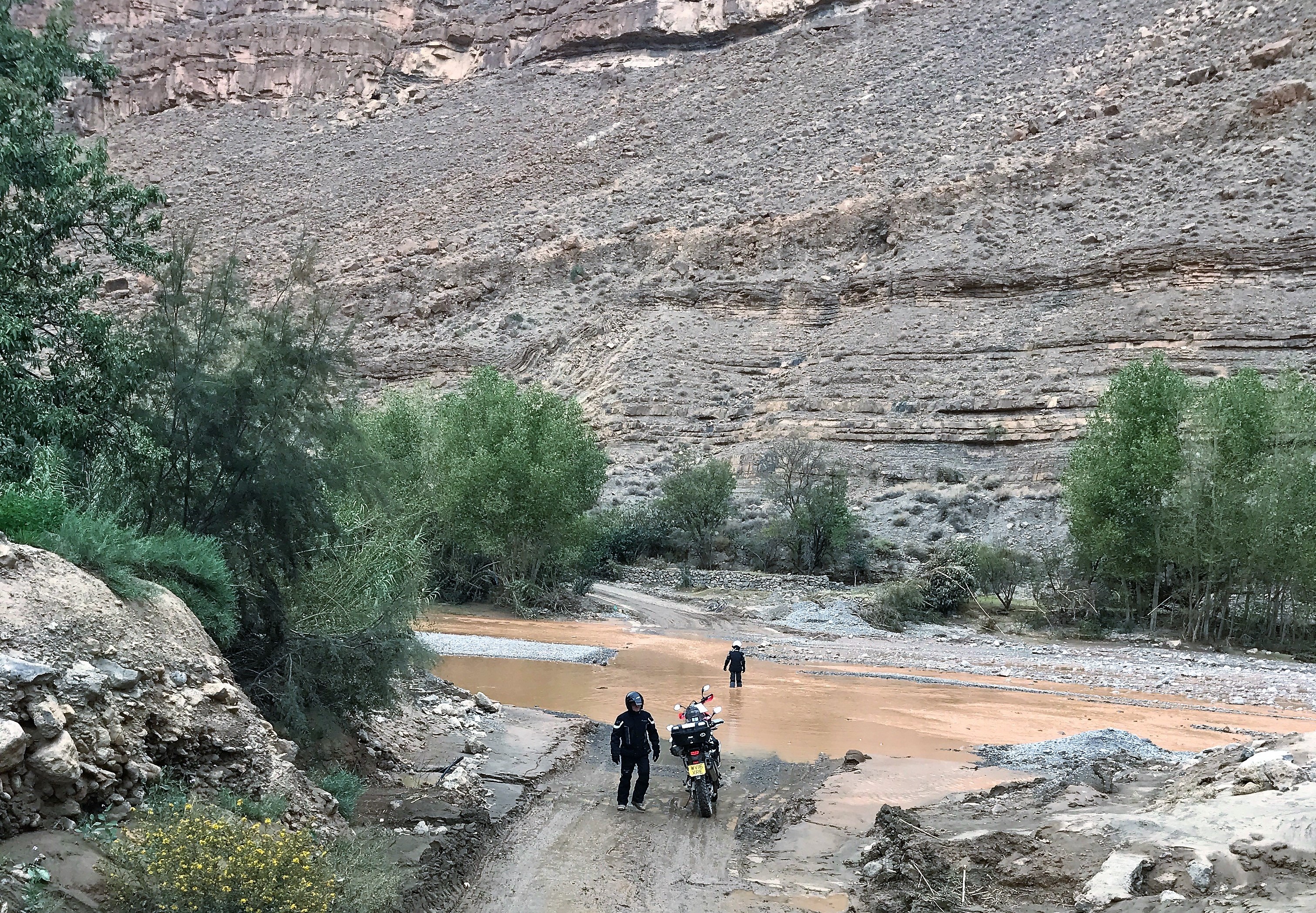 Sally surveys a river crossing to make sure it’s suitable for the road-going bikes.

Spurred on by adrenaline, petrol, (still no food) and a desire to once again be warm and dry, we descended from the mountains in the dark and found a hotel at around 11pm. Sadly the restaurant was shut, but the nightclub was open where - surrounded by businessmen, hookers and a horrendous noise - we gratefully sank several bottles of the local beer, which was a rare (and pricey) find in Morocco.
br> Beer has an effective value when all you’ve eaten since 8am is a couple of fondant fancies - Roll on breakfast! 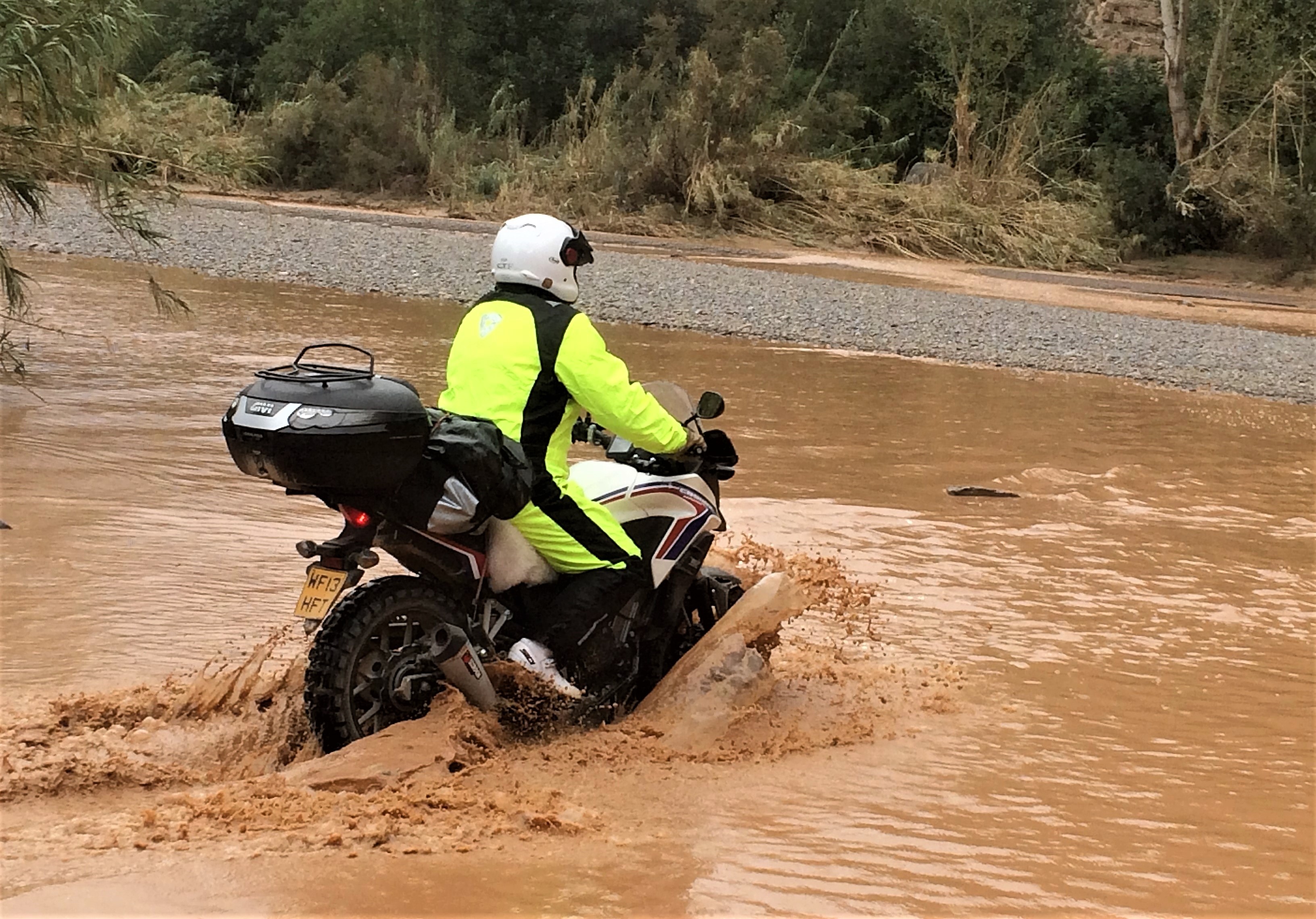 Al confidently crossing a river with his Honda CB500X.

We took a mixture of tarmac and gravel tracks back to Tangier and then the ferry to Spain. All in all, a grand trip that exceeded our expectations for sights, adventure and fun but also one that above all else truly underlined the amazing qualities of modern motorcycles, and how you don’t need a trail bike to trail ride!

Respect to Al and Colin for their motorcycling prowess and big thanks to Rob Jones of Fly and Ride for making it all possible. 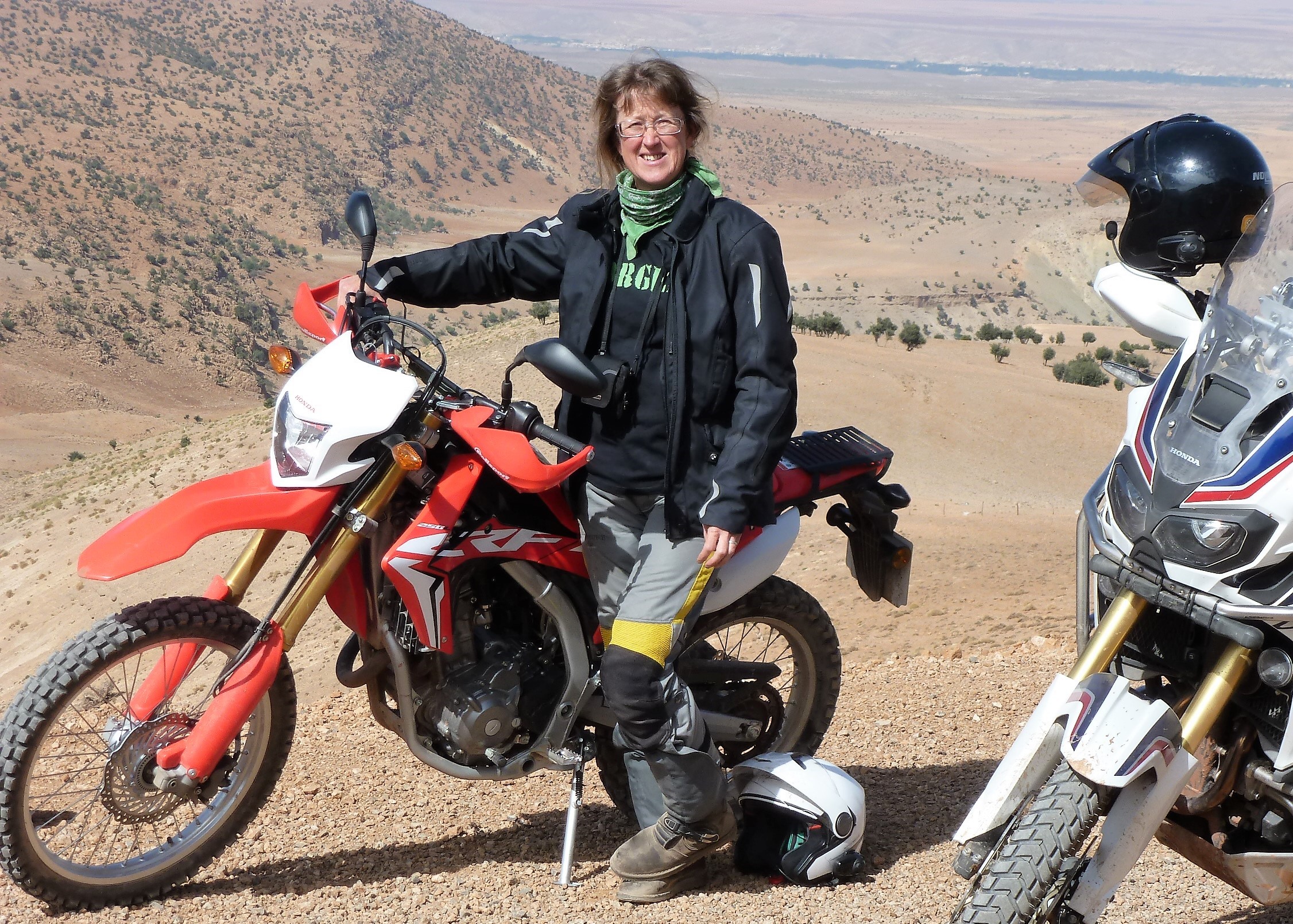 Sally Pritchard with her Honda CRF250L.

Sally and John Pritchard have been members of the TRF for a quarter of a century, riding through Europe (and beyond) during this time.

Have you ridden in Morocco? Perhaps you too have been hemmed in by a flash flood or heavy rainfall? Let us know!