Part one of the past, present & future of electric motorcycling by TRF life member and international journalist Paul Blezard.

Unless you’ve been living in a cave for the past few years, you must be aware of the existence of electric scooters, motorcycles and mountain bikes and have probably even heard of Zero’s dirt-friendly FX and DS models as well as KTM’s Freeride E-XC. However, you might be surprised by how long electric vehicles have been around and what some people have already achieved with them - on road, track and dirt. For example, the first electric two-wheeler was designed before 1900 and for the first decade of the twentieth century electric cars outsold those powered by fossil fuels. 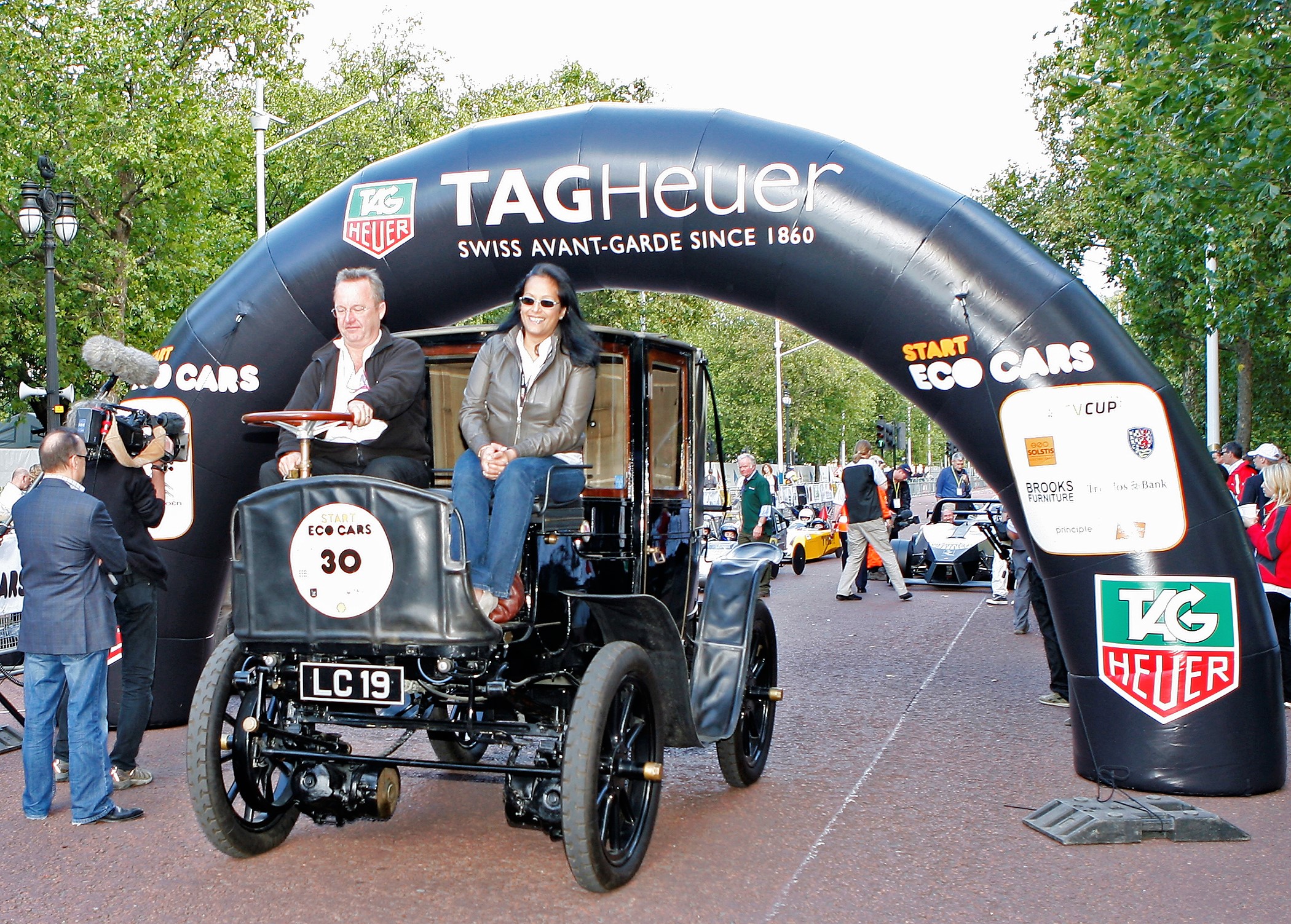 This 1904 Krieger was an early electric car, here being driven in The Mall during an all-electric event in 2010.

I first rode electric powered two wheelers (ePTWs) back in the 1990s although I didn’t ride an electric dirt bike until I got my hands on a Swiss-built Quantya in 2008. The following year five Quantyas raced head-to-head against five Zeroes in the first all-electric motocross race in Las Vegas – Quantyas came first and second. Zero got their revenge a few months later when a single Zero MX beat four Quantyas and several 450cc petrol-powered machines to win an event in France.

The first electric Ecomobile and a Quantya at the Brno GP track in 2008.

2009 was also the year of the first electric TT race (won by a British-built Agni) and in 2010 there were Zeroes and Quantyas demonstrated alongside a vast range of all-electric vehicles in a cordoned-off Mall in front of Buckingham Palace. I also rode the first Mavizen electric production racer, several electric scooters and a Zero supermoto during the first of the Belgian ‘Clean Week’ electric events at the Zolder former F1 circuit in the Spring of 2010. 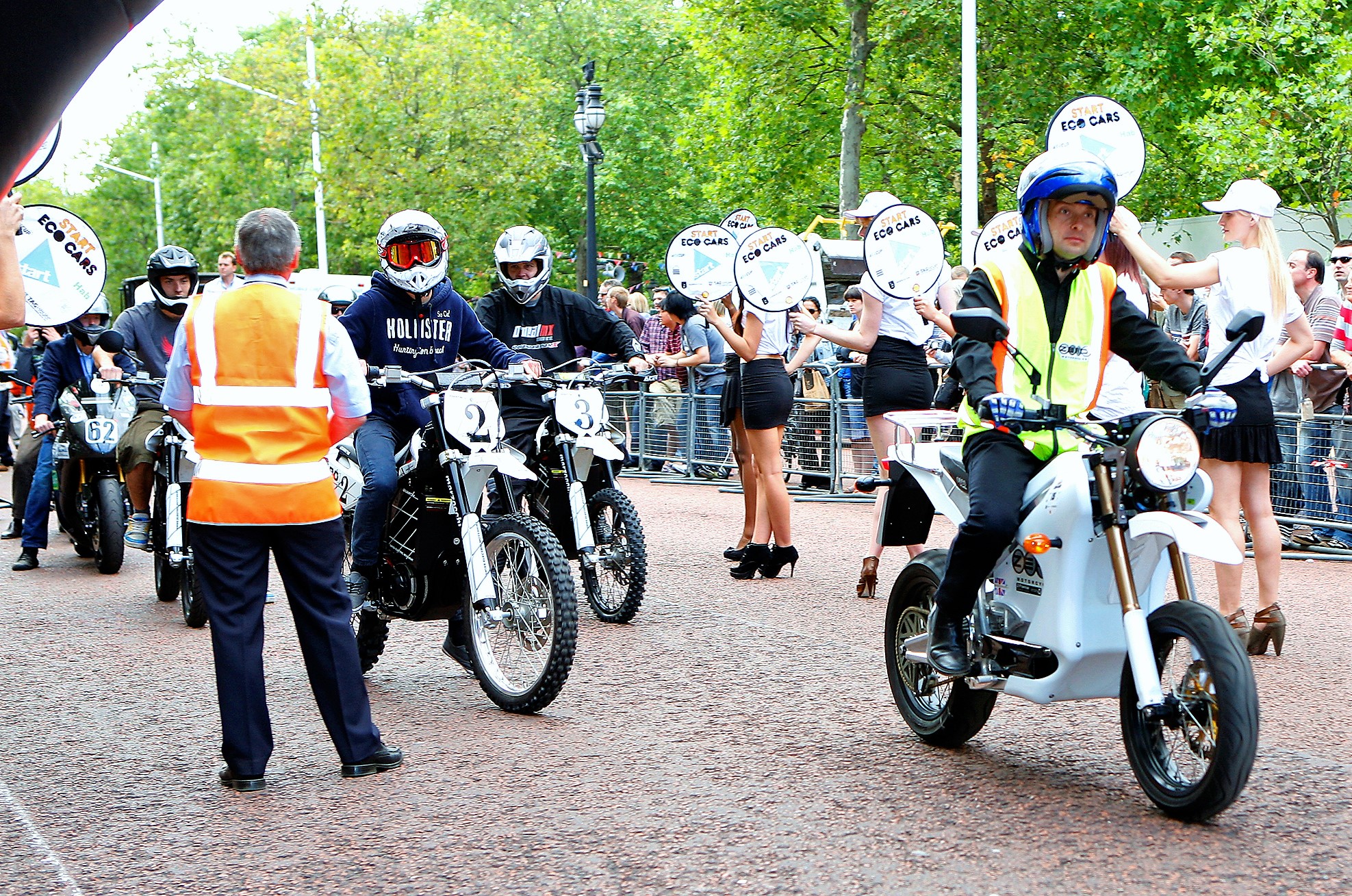 The 2011 UK Motorcycle Trade Expo at the NEC had an ‘Electric Zone’ for the first time and there were Quantyas available to ride, along with many other ePTWs. One dirt legend who tried one was ‘Big Arfur’ Browning, the ageless scrambler. With the help of Arthur, the Quantya importer was able to put on an all-electric Quantya race up the famous Red Marley hill climb a few weeks later, in April 2011. 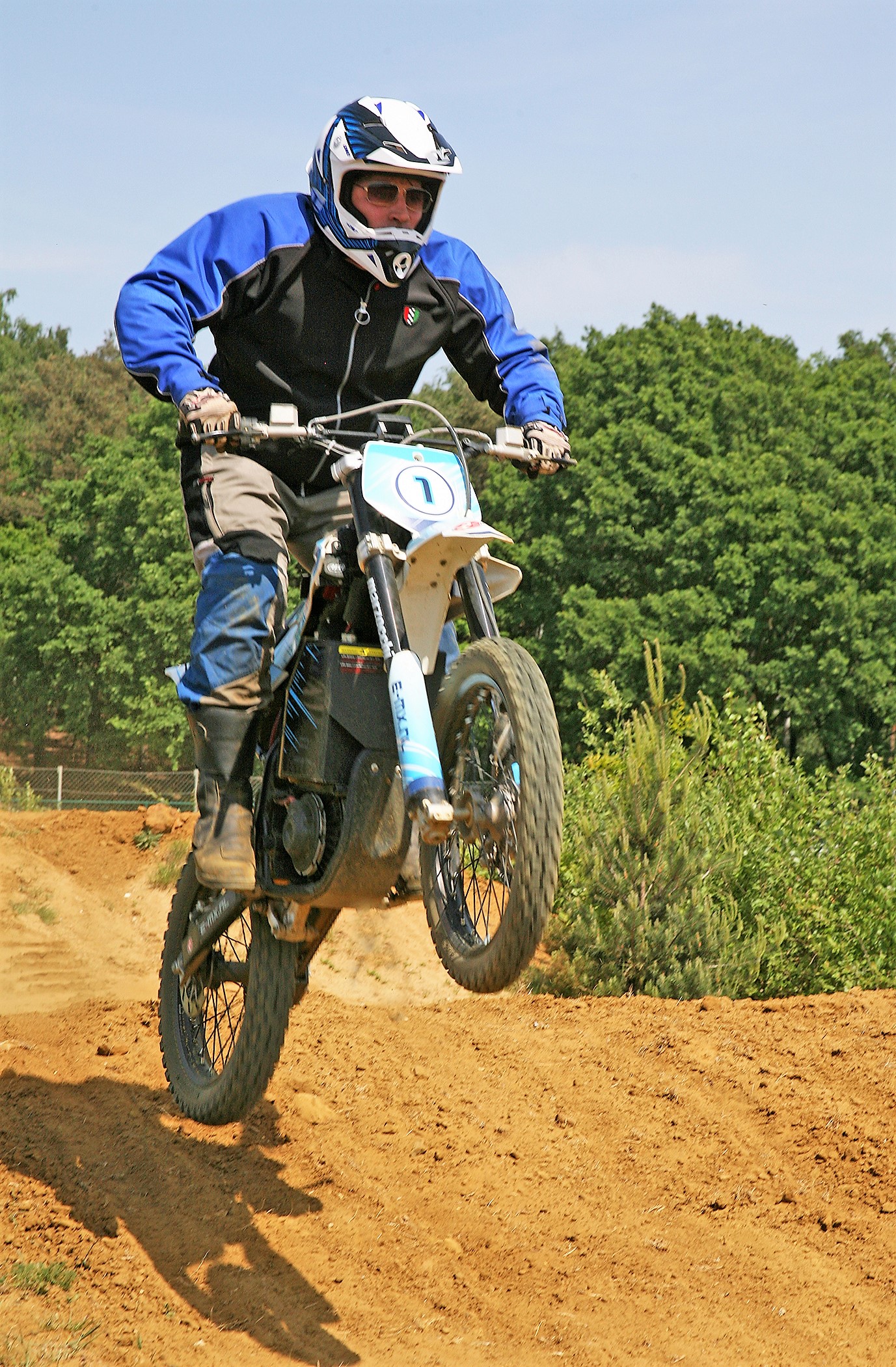 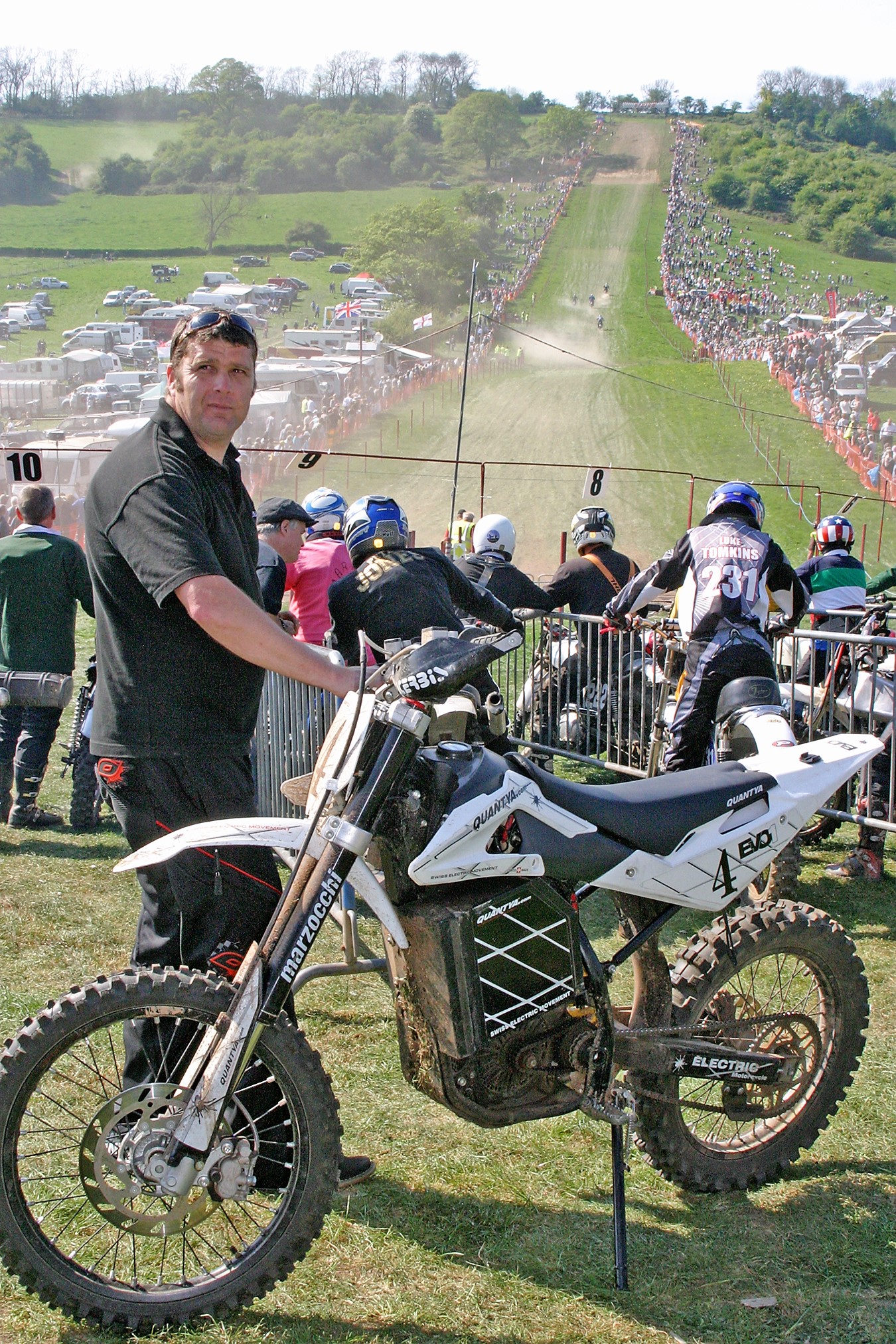 Rob with a Quantya at the foot of Red Marley Hill.

The Spring of 2011 was also when I first visited Zero’s HQ in Scotts Valley, California and had the pleasure of riding their full range of five models on road and dirt. I tried the street-legal versions of their trail bikes on a trail through the woods and their electric MX model on a miniature motocross circuit. Suffice it to say that I wore myself out before the batteries ran flat and the Zero team performed an impressive series of very quick battery swaps to keep the MX machines running all day long. 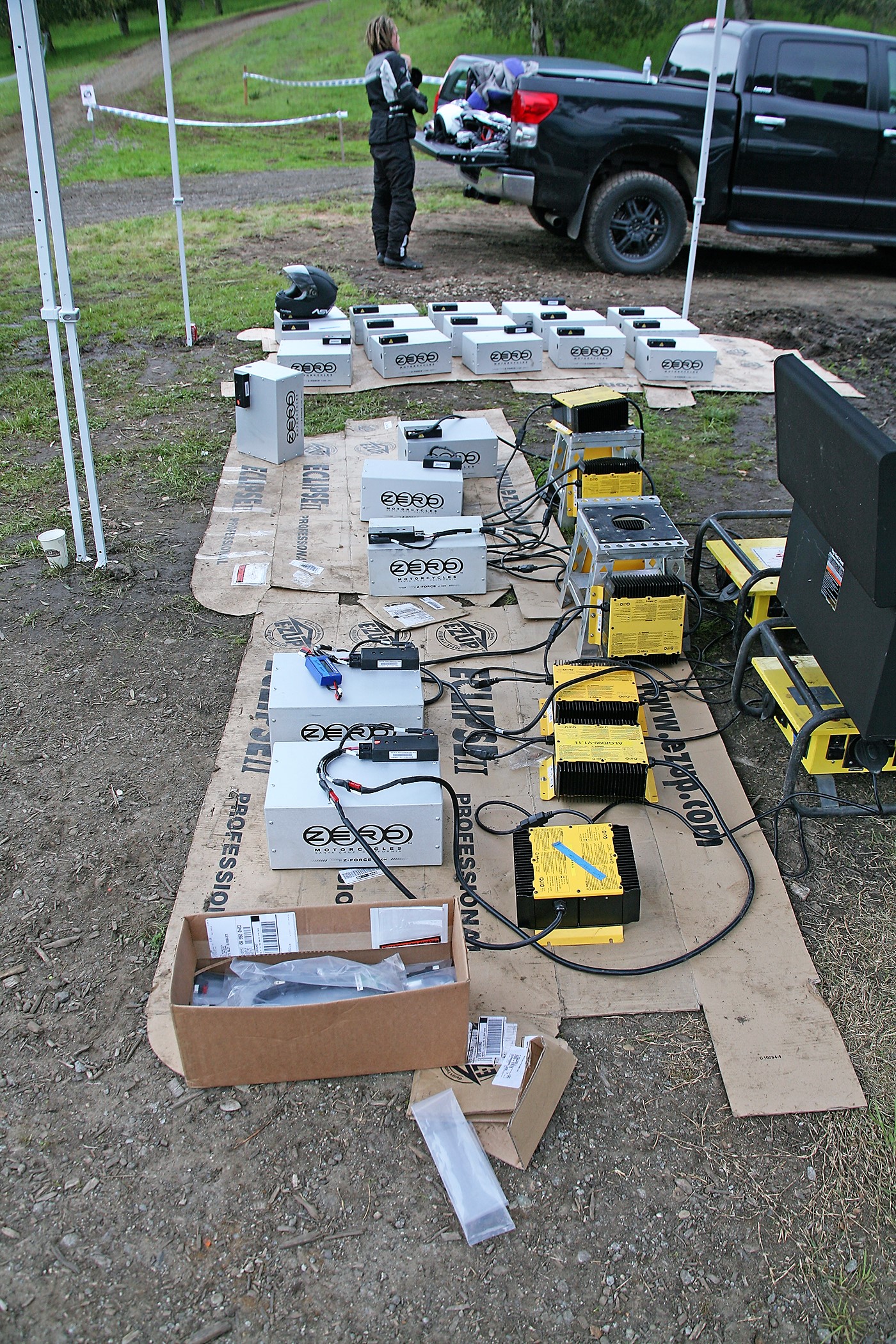 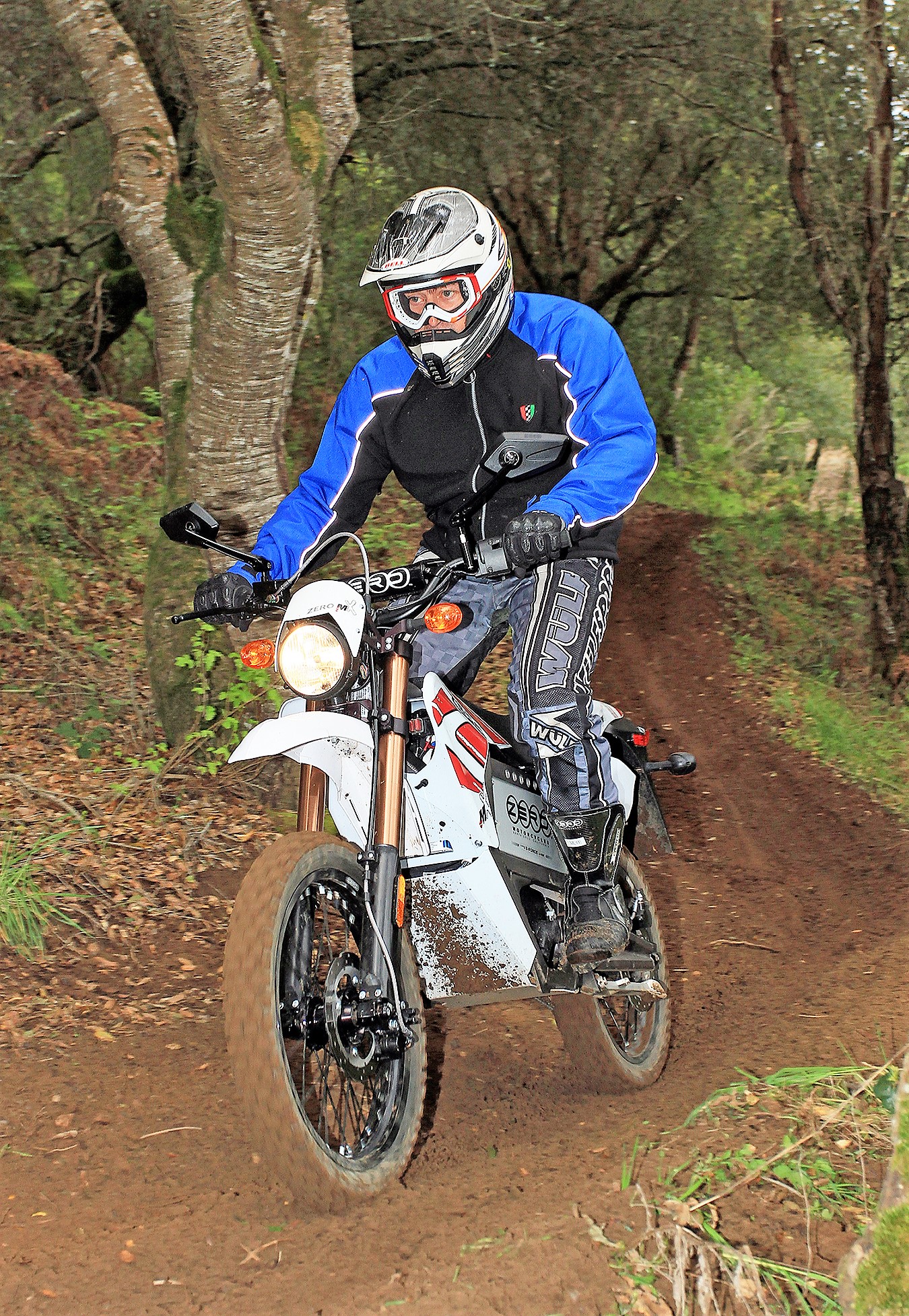 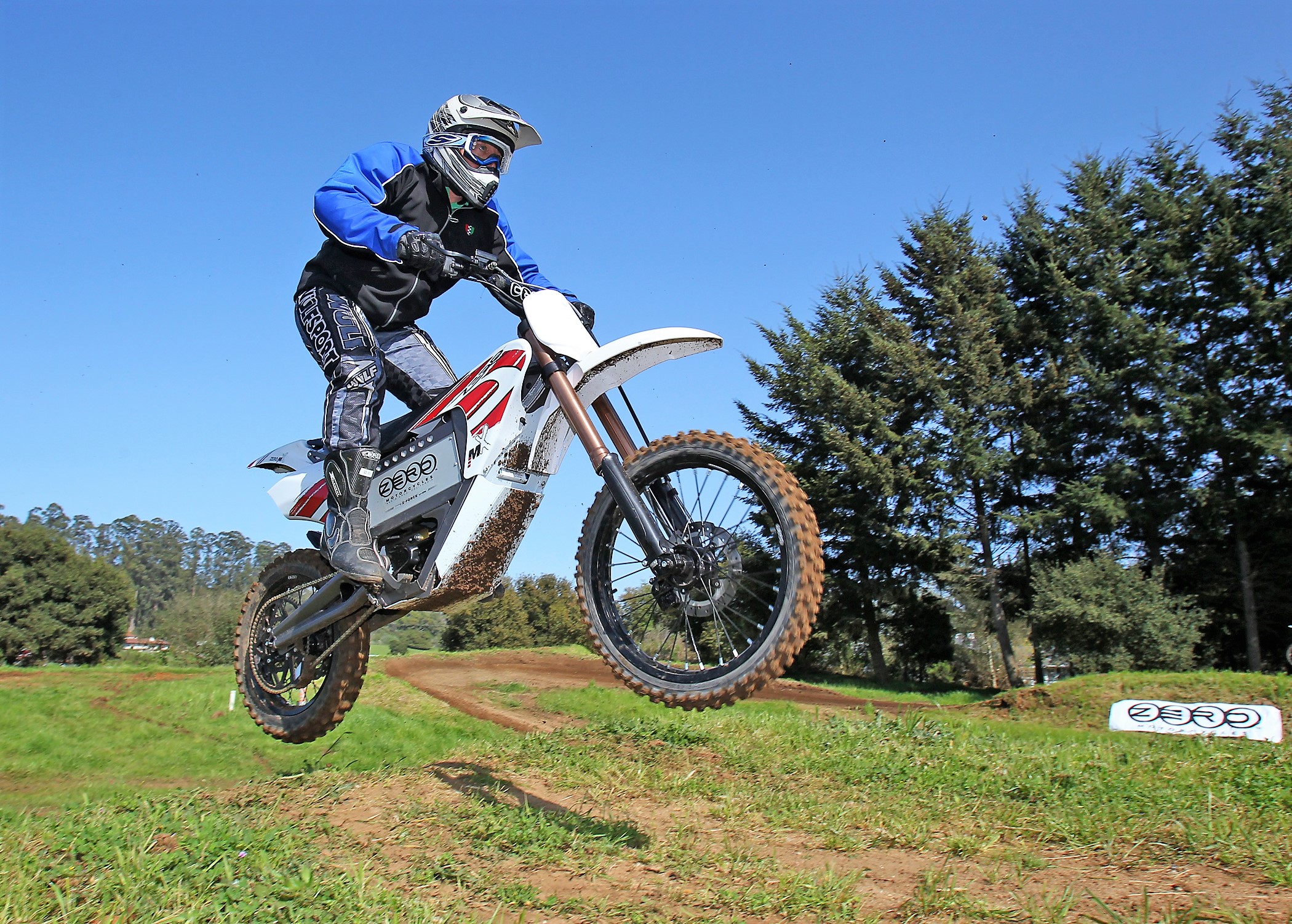 Blez takes to the sky upon a Zero MX.

Back in London, I borrowed a 2009 Zero DS to help Long Way Round cameraman Claudio Von Planta explain, in a ‘webinar’, how he had shot much of the footage for his superb Racing Green Endurance documentary from the back of motorcycles, including from a Zero, while in the San Francisco area (the film documented the amazing story of a group of British and German engineering graduates who drove an all-electric sports car from Alaska to Tierra del Fuego!).

In return, Claudio kindly shot a little video of me riding the Zero up and down the stairs to the Brick Lane TV studio where we’d shot the webinar: 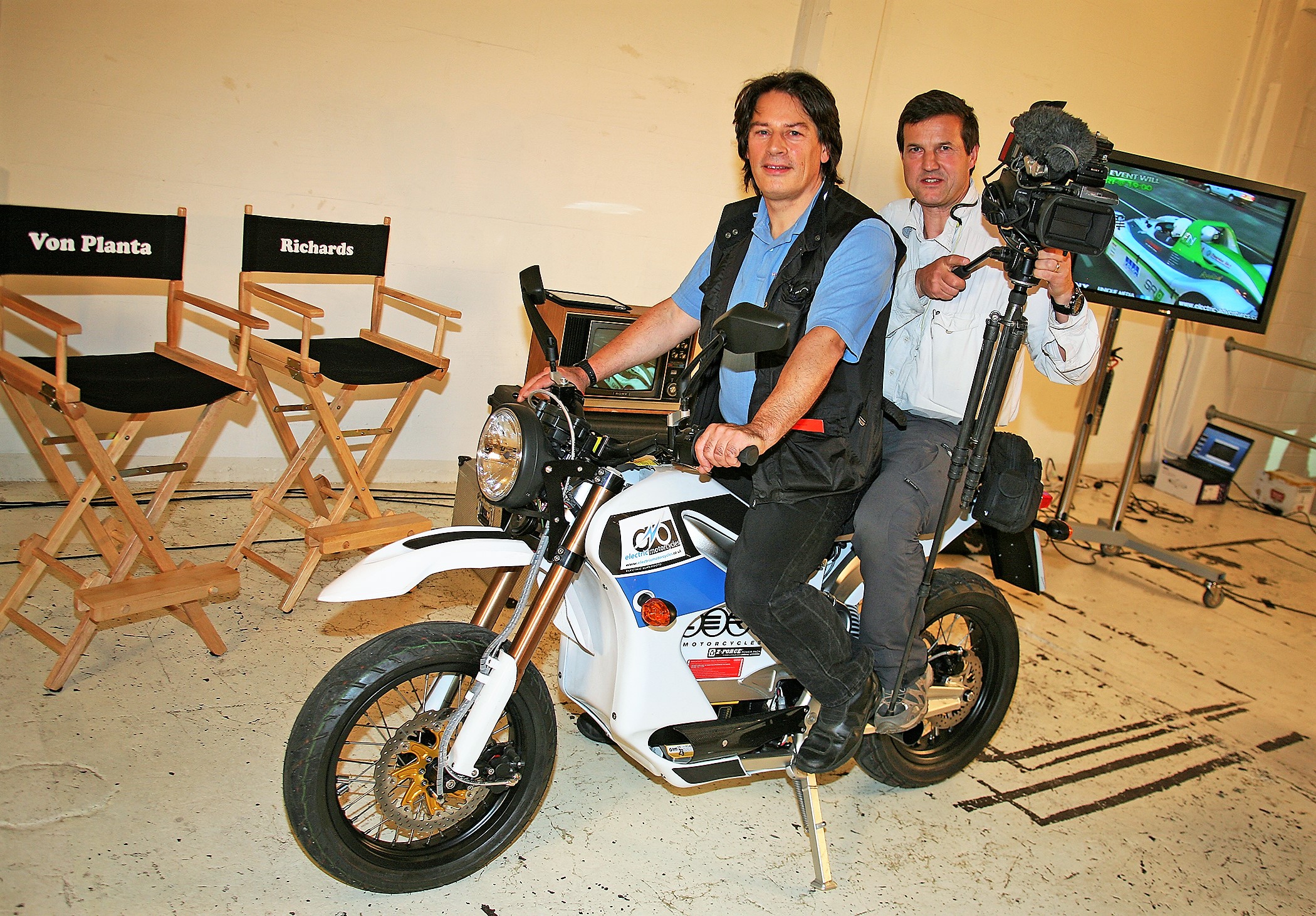 Blez & Claudio on the Zero with an electric sports car on the screen behind them.

I discovered just how short the range of those early Zeroes was when I attempted to ride the DS down to Elspeth Beard’s water tower near Godalming. Despite using the most direct route, and riding very gently, it conked out after 24 miles, two miles short of my objective. Fortunately I was able to plug in for a top-up at a pub after a push of only a few hundred metres.

Elspeth had a quick spin on the Zero after it was recharged – a big change from her usual BMW R80GS and the famous R60 which carried her around the world in 1982-1984. 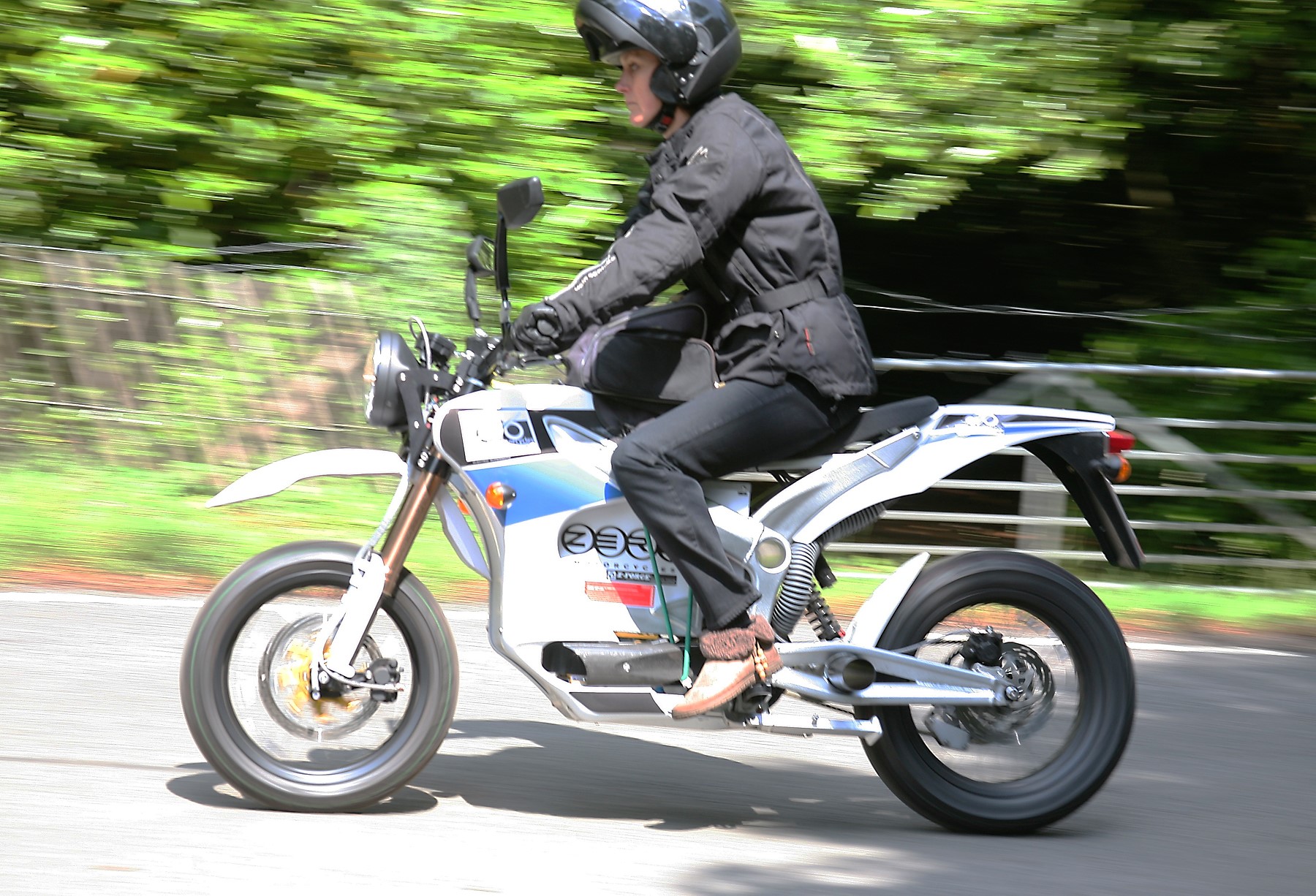 By that time, 2011, three electric motorcycles had ridden around the world in 80 days and the Peraves E-Tracer cabin motorcycle had won its class and $2.5million in the Progressive Automotive X-Prize, in the USA.

TREV, ZeroTracer and Vectrix after going around the world in 80 days. 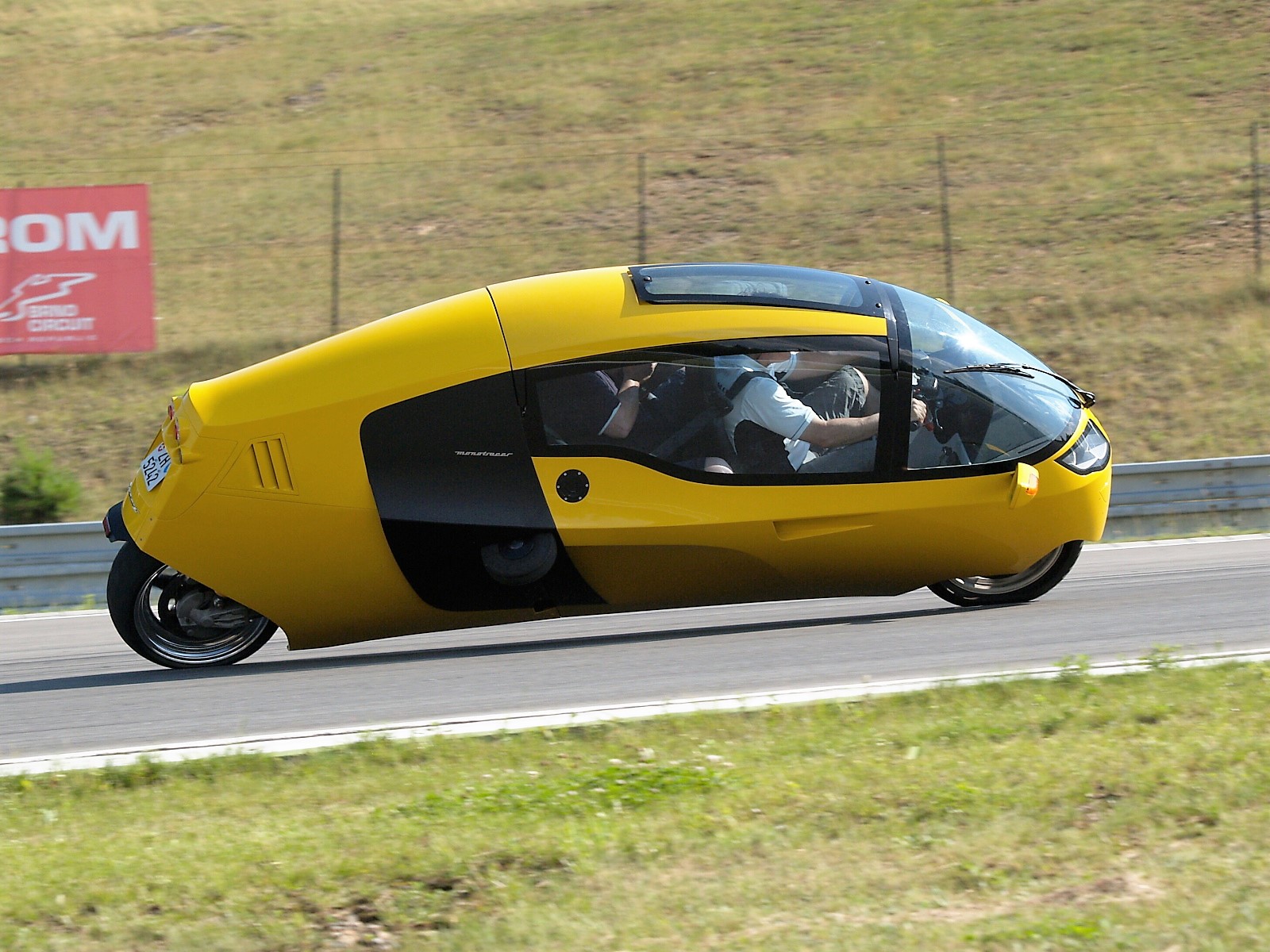 I was the official photographer at the launch of the new electric branch of the Motorcycle Industry Association at GLA HQ in June 2011, and there we had six electric scooters and motorcycles including a Quantya and two Zeroes lined up in front of Tower Bridge for the occasion. 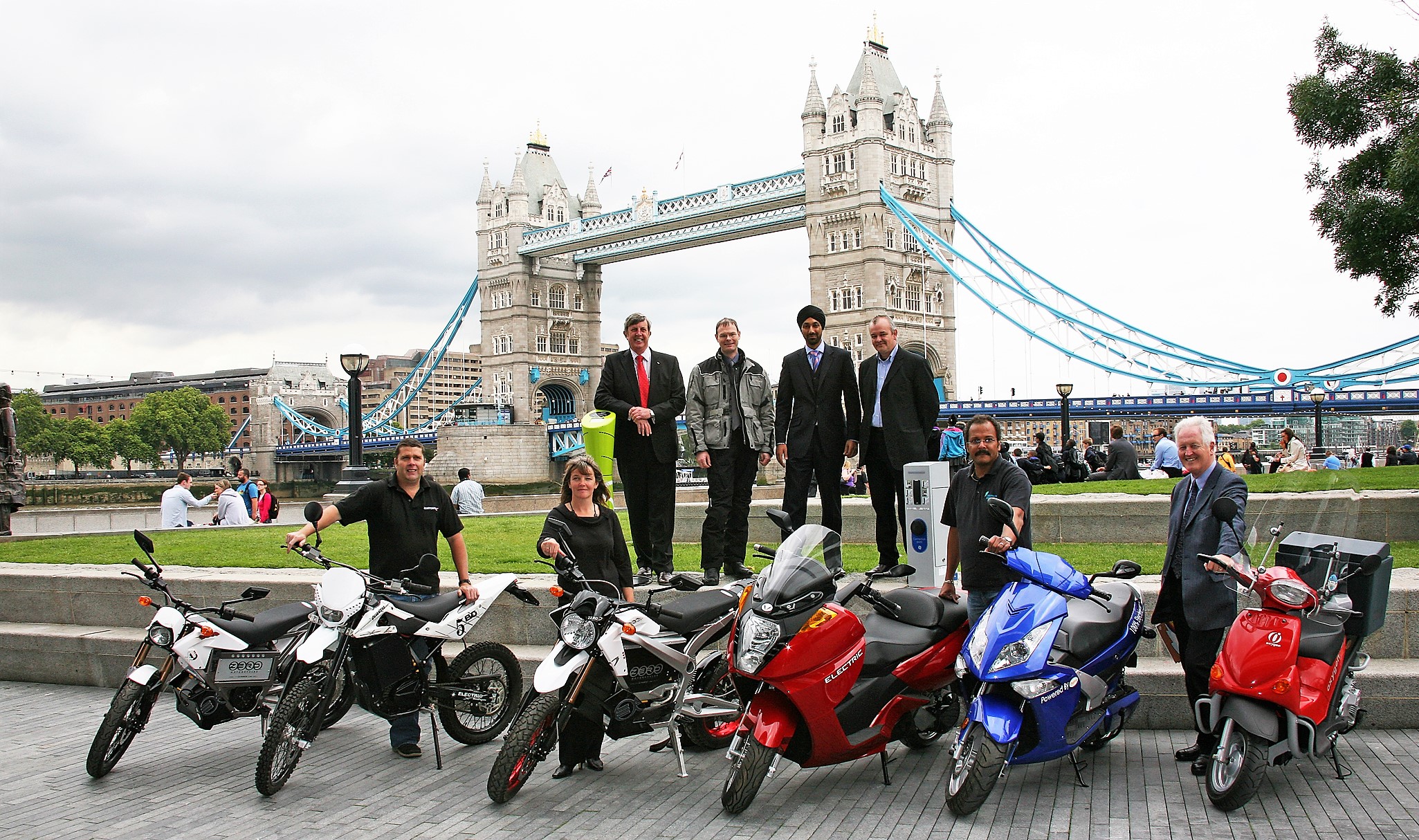 The 2011 eMICA launch at Tower Bridge in London.

As a surprise bonus, Boris Johnson, then Mayor of London, turned up unexpectedly and was persuaded to have a quick spin on both the Quantya and a Zero. 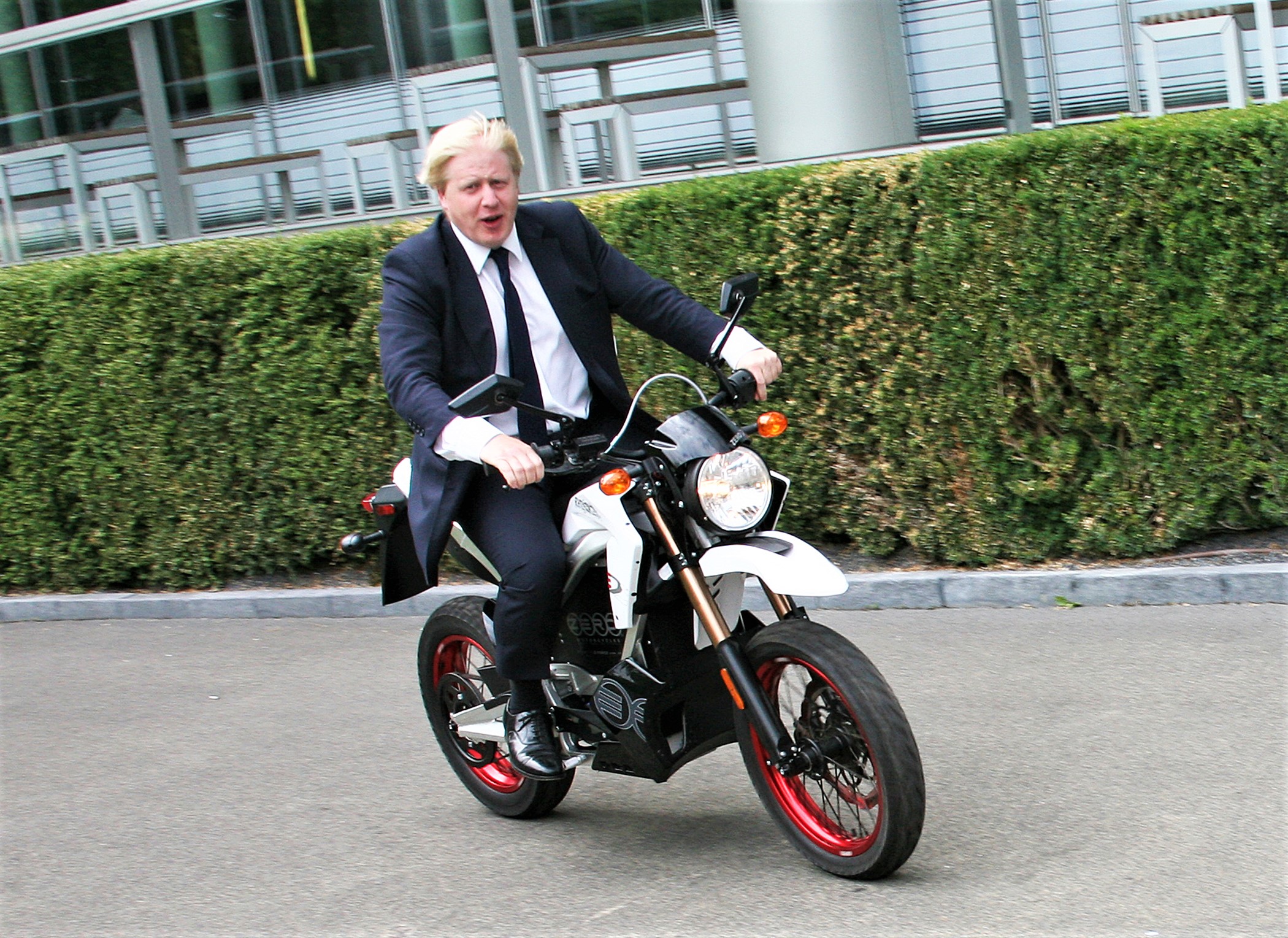 At the Silverstone MotoGP that year I discovered that the Pramac MotoGP team were using Quantyas instead of the traditional petrol-powered paddock bikes and a few weeks later Alex Guini kindly gave me a guided tour of the ‘carbon neutral’ Pramac team set-up at the Sachsenring round in Germany.

Alex Guini on a Quantya.

The 2012 London show, at ExCel, provided any visitor with the chance to try an electric trail bike when Quantyas were used in the Moto Gymkhana ‘in and out of the cones’ competition within the main exhibition area. Good fun, fume-free and almost silent. Quantya also had a whole series of ‘Quantyaparks’ on the Continent, but in a strange deal they all got sold to Zero’s US rival Brammo and were renamed ‘Brammoparks’ before disappearing without trace. Brammo did produce a prototype electric trailie, the Engage, as a potential ‘stablemate’ for their Enertia and Empulse road bikes, but it was never put into production. 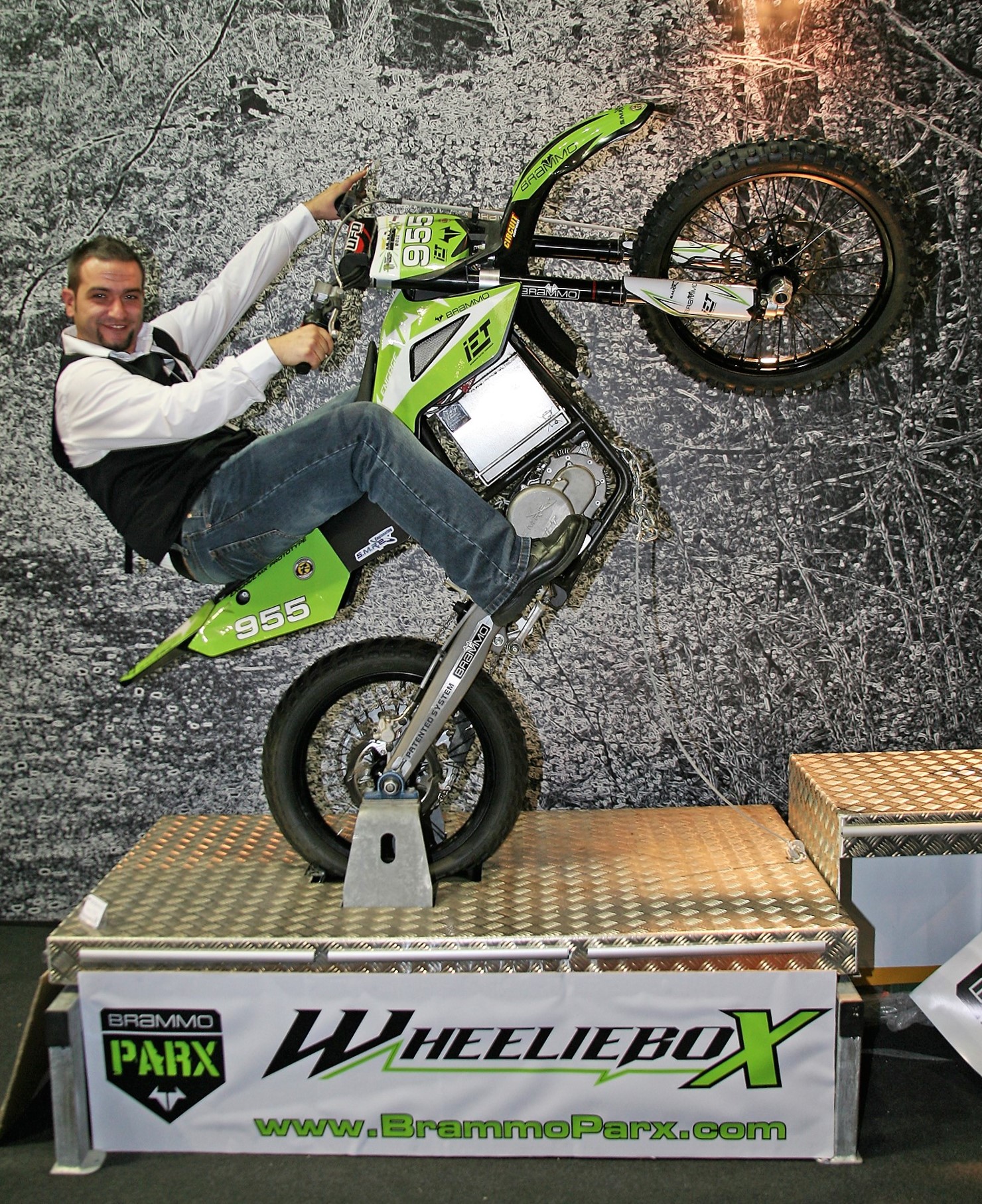 Brammo was bought by Polaris in January 2015; the Brammo Empulse was rebranded as a Victory and the Brammo-Victory racebike was ridden to second place in the 2016 TTZero by William Dunlop. Then Polaris axed the Victory brand altogether after purchasing Indian. Now that Harley have announced that they will definitely be putting an electric machine into production in 2019, let’s hope that Polaris follow suit with an electric Brammo-Indian! 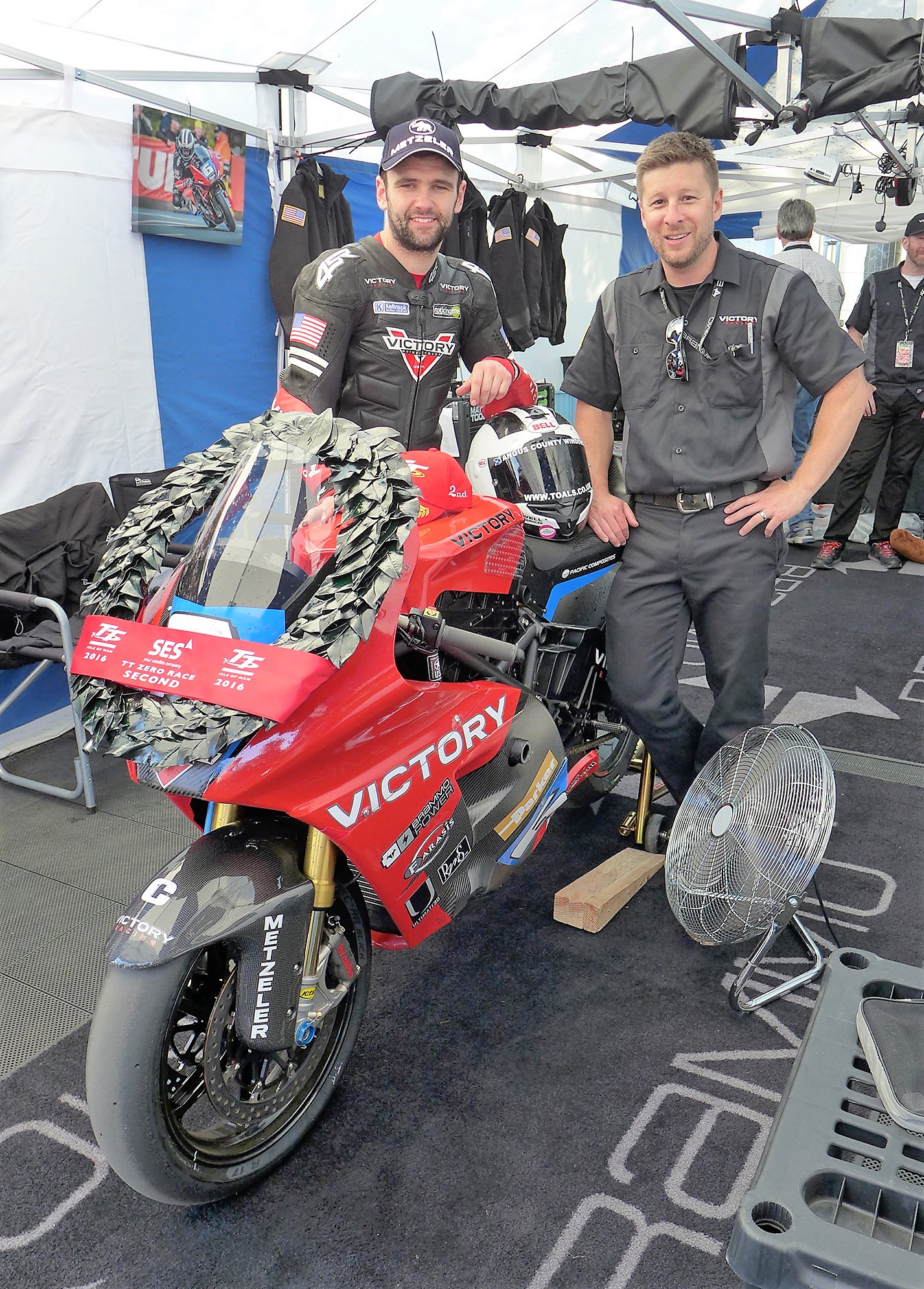 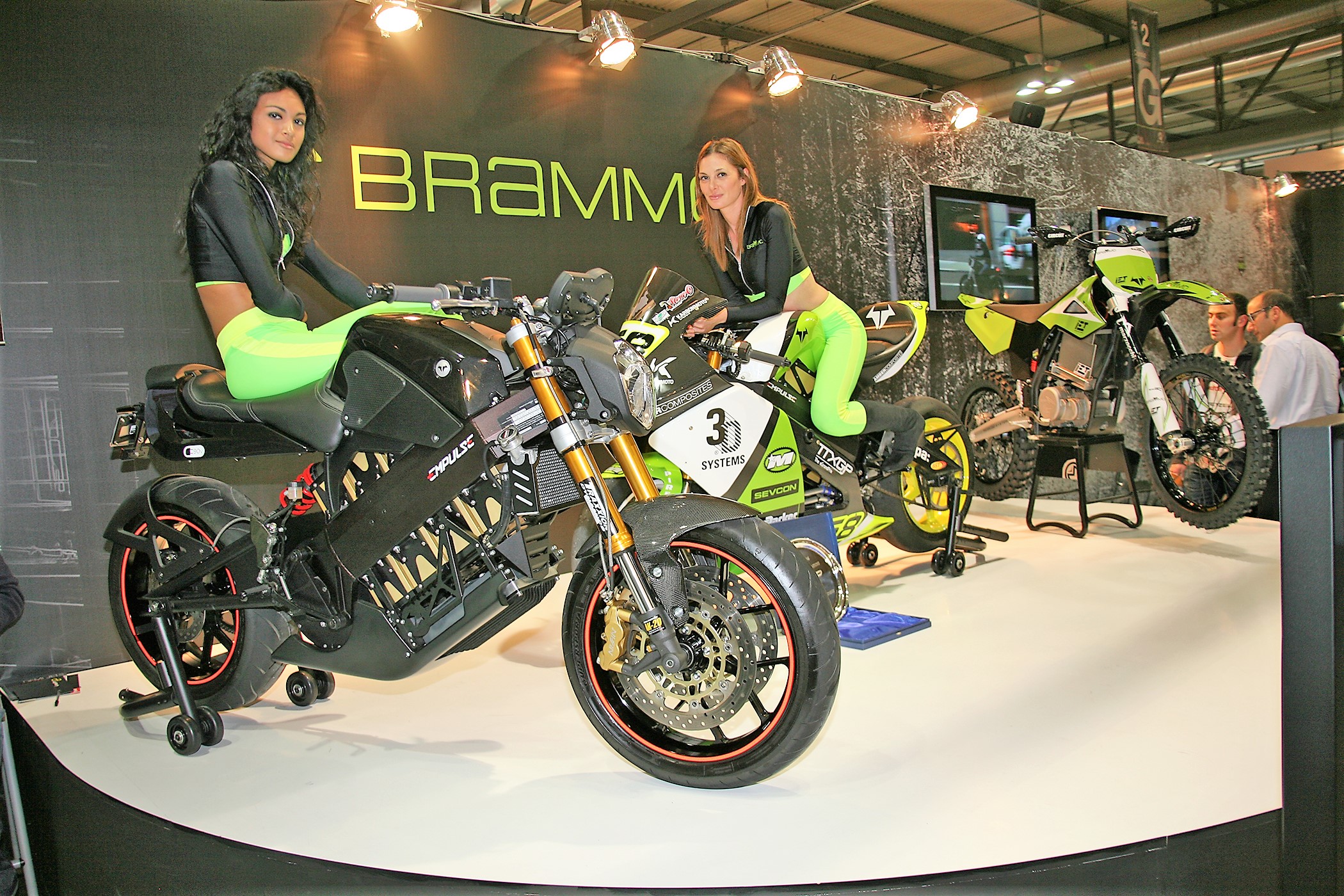 By the time I returned to the Zero factory in January 2015, the firm had dropped their off-road only MX model in favour of the heavier but street legal FX machine, although it retained the MX’s ability to swap both batteries in seconds. While in the area I also got the chance to ride the heavily modified 2012 Zero on which Terry Hershner had done an ‘Iron Butt’, covering more than a thousand miles in under 23 hours (This astonishing feat was achieved with no back-up whatsoever, just a huge amount of determination plus a mixture of improved aerodynamics, courtesy of Craig Vetter, creator of the Windjammer, and lots of extra batteries). 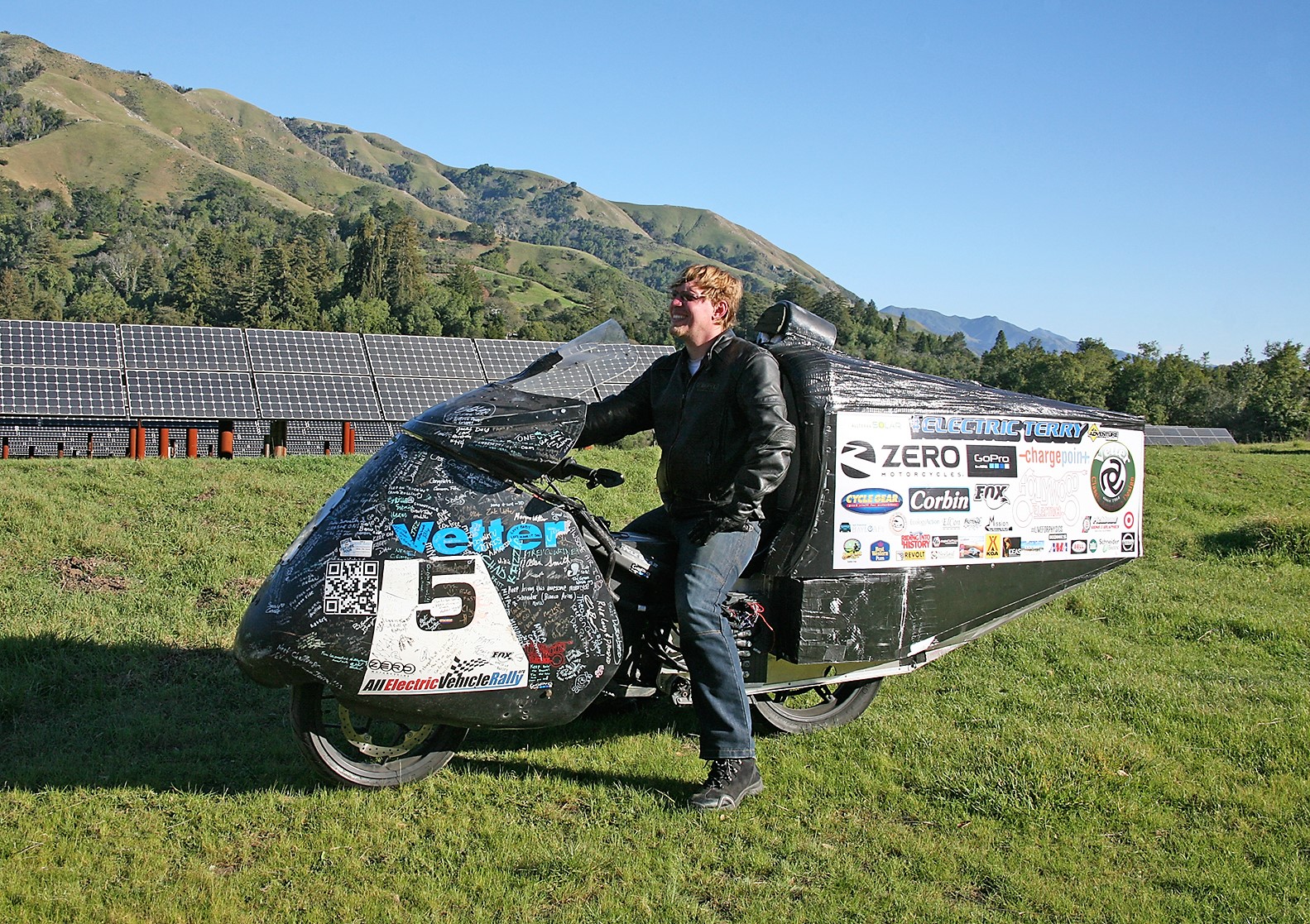 Terry Hershner and the Vetter-modified Zero on which he rode 1,000 miles in under 23 hours.

2015 also saw the long-awaited arrival of KTM’s FreerideE electric trail bike. I had the great pleasure of riding one at the UK launch, held, appropriately enough, at Stuart Rutter’s superb E-scape all-electric trail park in Cheshire, where he also keeps a fleet of Quantyas, OSETS and Kubergs, along with a striking prototype ‘Brutal Blau’ which he was involved with a few years ago. 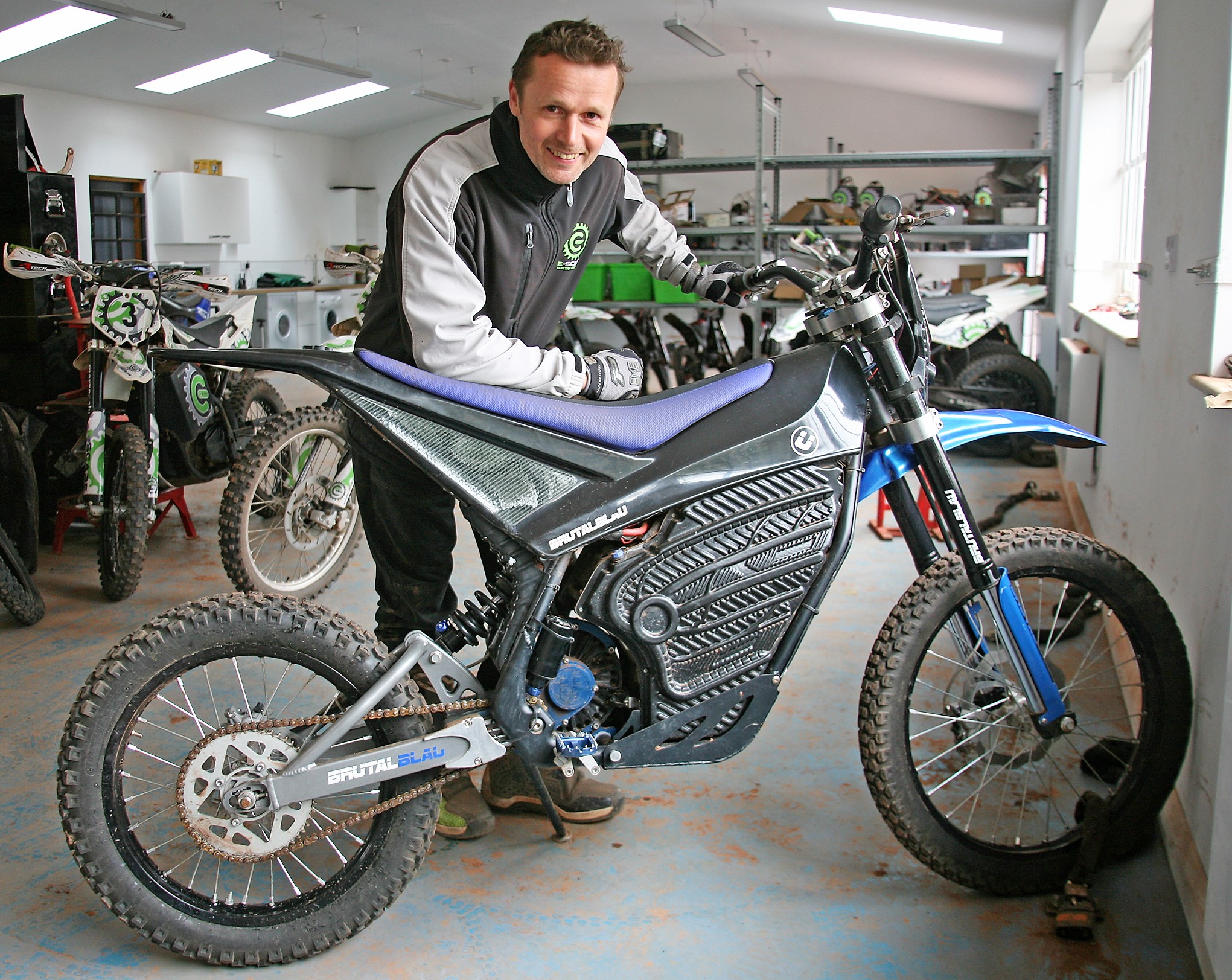 When launched, the FreerideE was lighter and more dirt-capable than the Zero FX, and available in both off-road only and street-legal versions, but had a smaller range. It has one big jerry-can-sized battery instead of the Zero’s pair of car battery sized ones, but it can also be swapped in well under a minute. 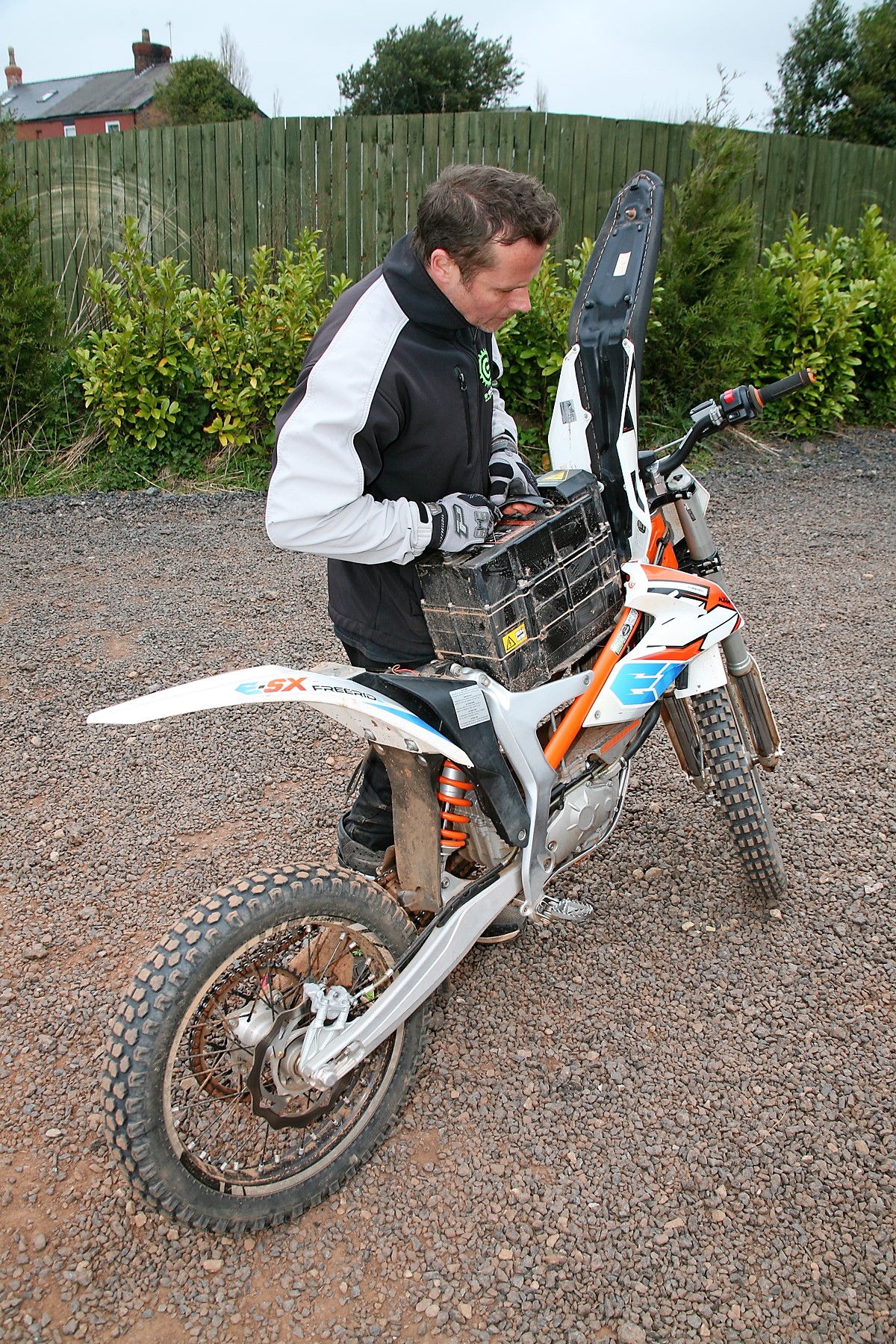 Stuart Rutter replaces a battery much quicker than he can decant petrol!

Blez jumping a KTM Freeride E-XC at the E-scape park in Cheshire.

2015 was also the year in which, for my sins, I got heavily involved with helping to prepare Carla McKenzie for her John O’Groats to Land’s End (JOGLE) trail ride and shared with her my knowledge and enthusiasm for electric PTWs of all kinds. Carla had her first taste of electric motorcycling riding a KTM on the ‘pop up’ trail park at that year’s Goodwood Festival of Speed, where we also met the astonishing Spencer Watt, a paraplegic who still competes in motocross despite losing the use of both legs in a motocross accident when he was only 15. For Spencer, the twist’n’go KTM was a doddle to ride compared to the hands-only controls to cover both brakes, clutch and throttle on his motocross racebike! 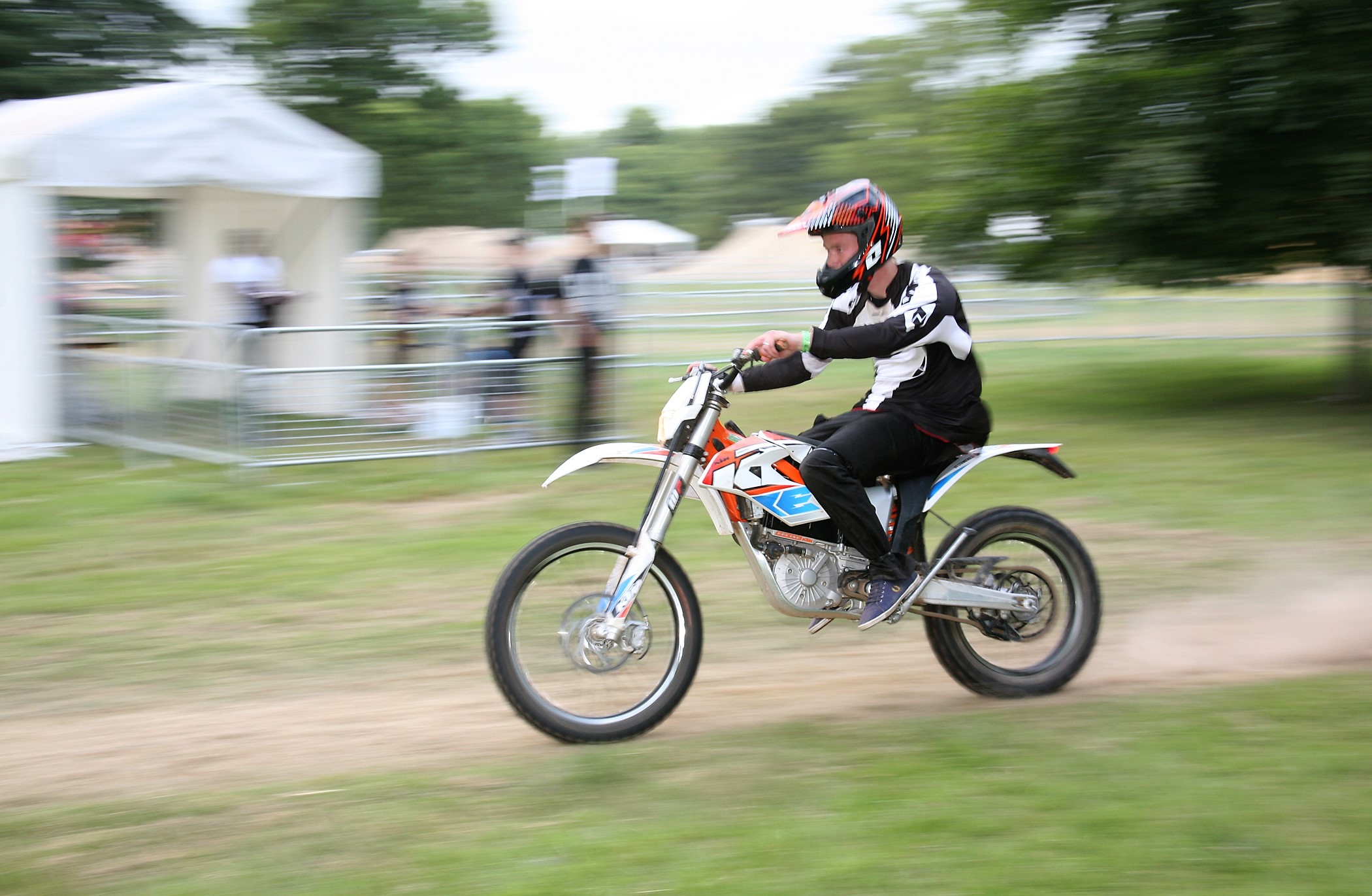 Spencer Watt in action on a KTM Freeride E-XC at Goodwood in 2015.

A few weeks later we went to the all-electric ‘High Volts’ day run by Stuart Rutter at Nantmawr Quarry, near Oswestry, where we both had our first ride on EM electric trials bikes. We also watched young kids on Kubergs, OSETs, Mecatecnos and electric mini-BSAs and bold men racing KTM FreerideEs. Little did I know what mad electric plans Carla would soon be hatching… 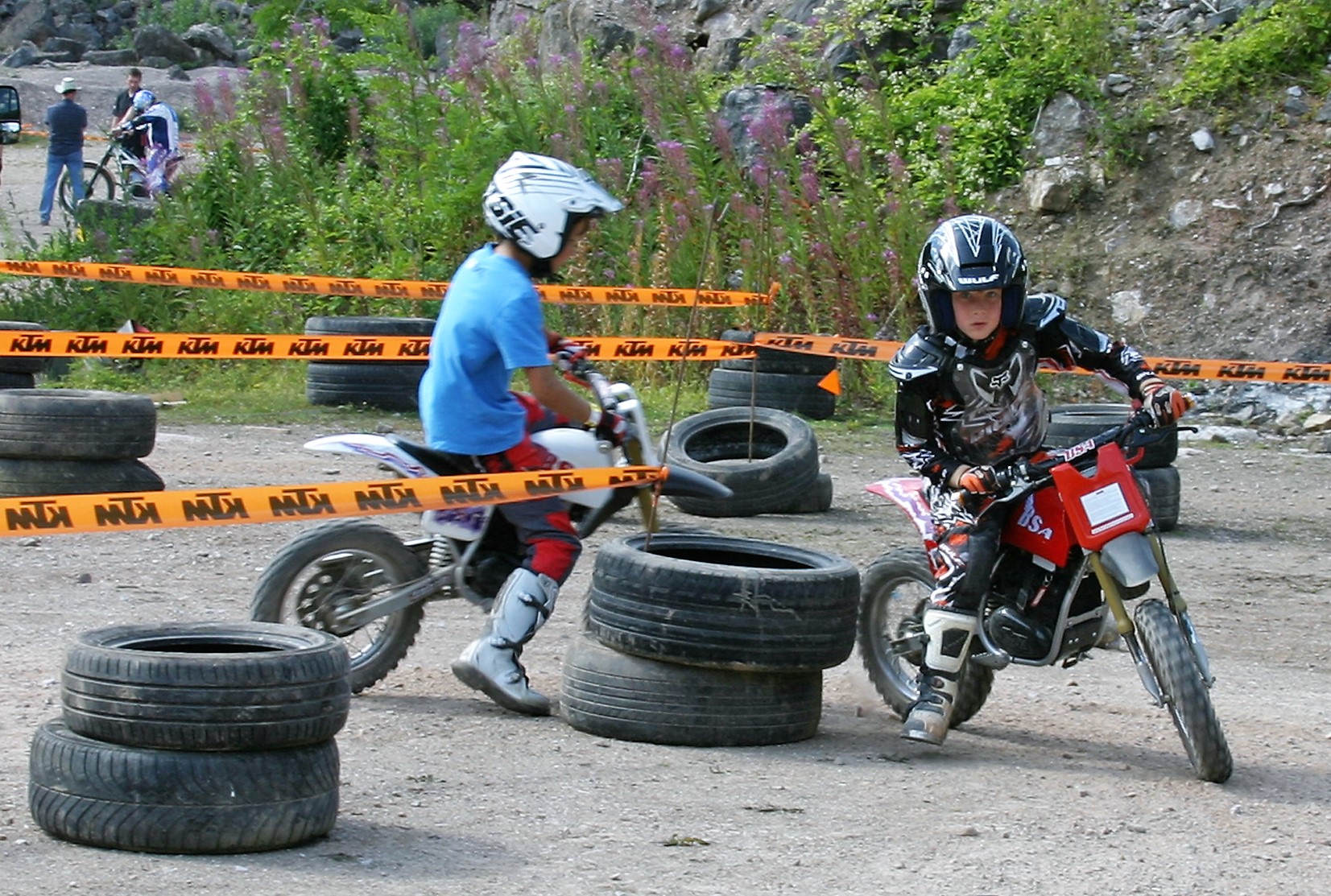 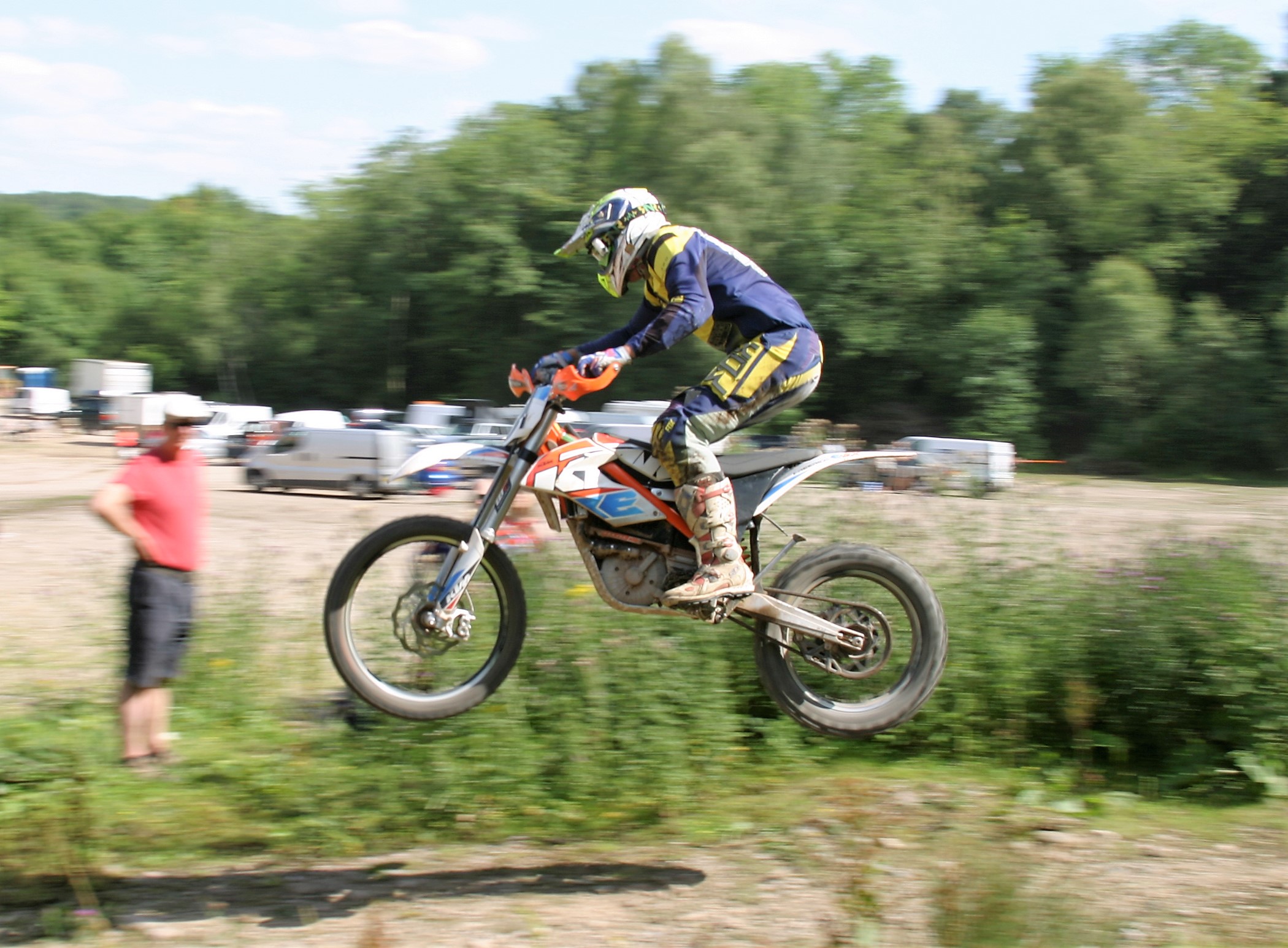 The race leader gets some air in the all-electric final race at Nantmawr Quarry. 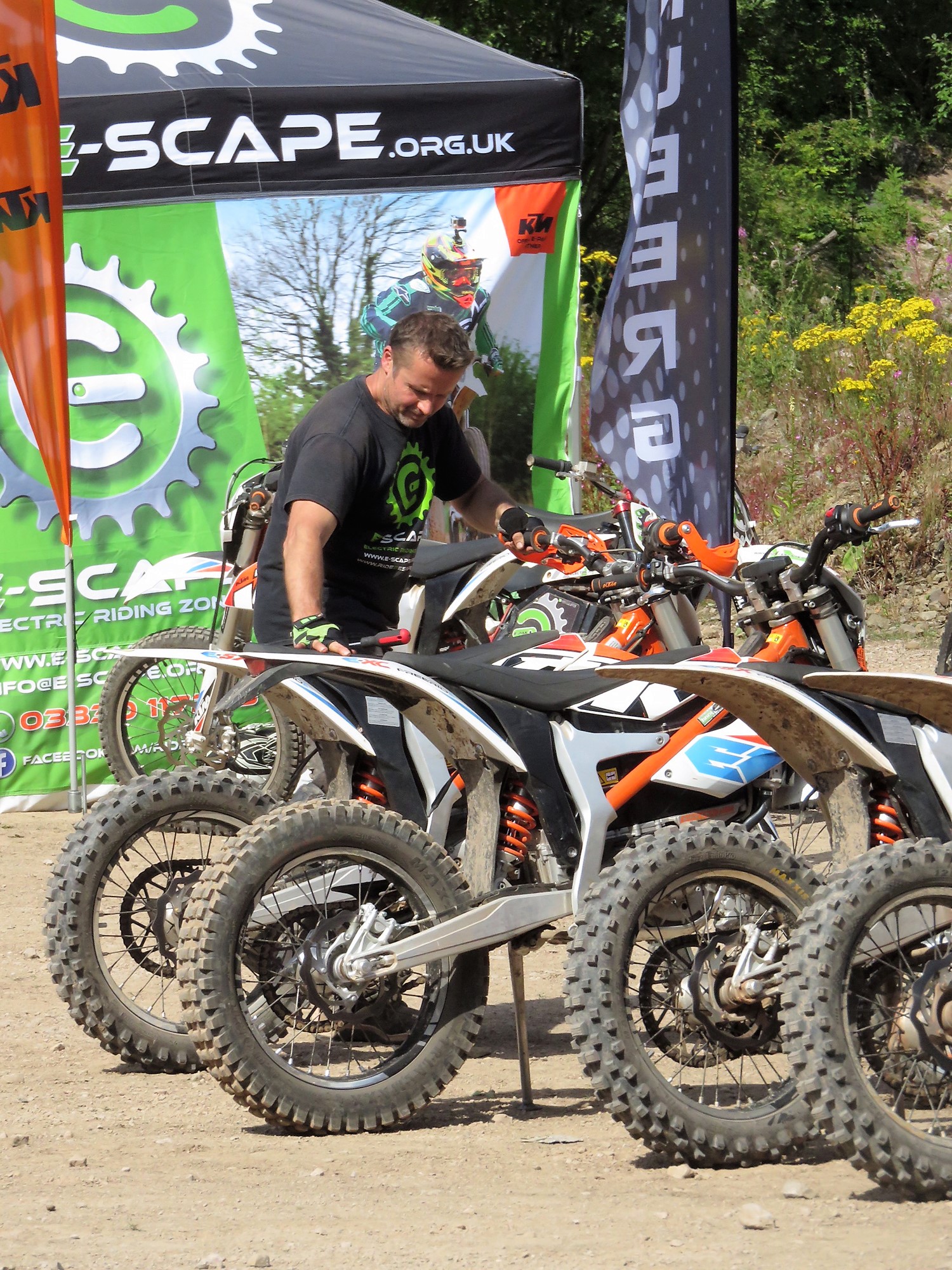 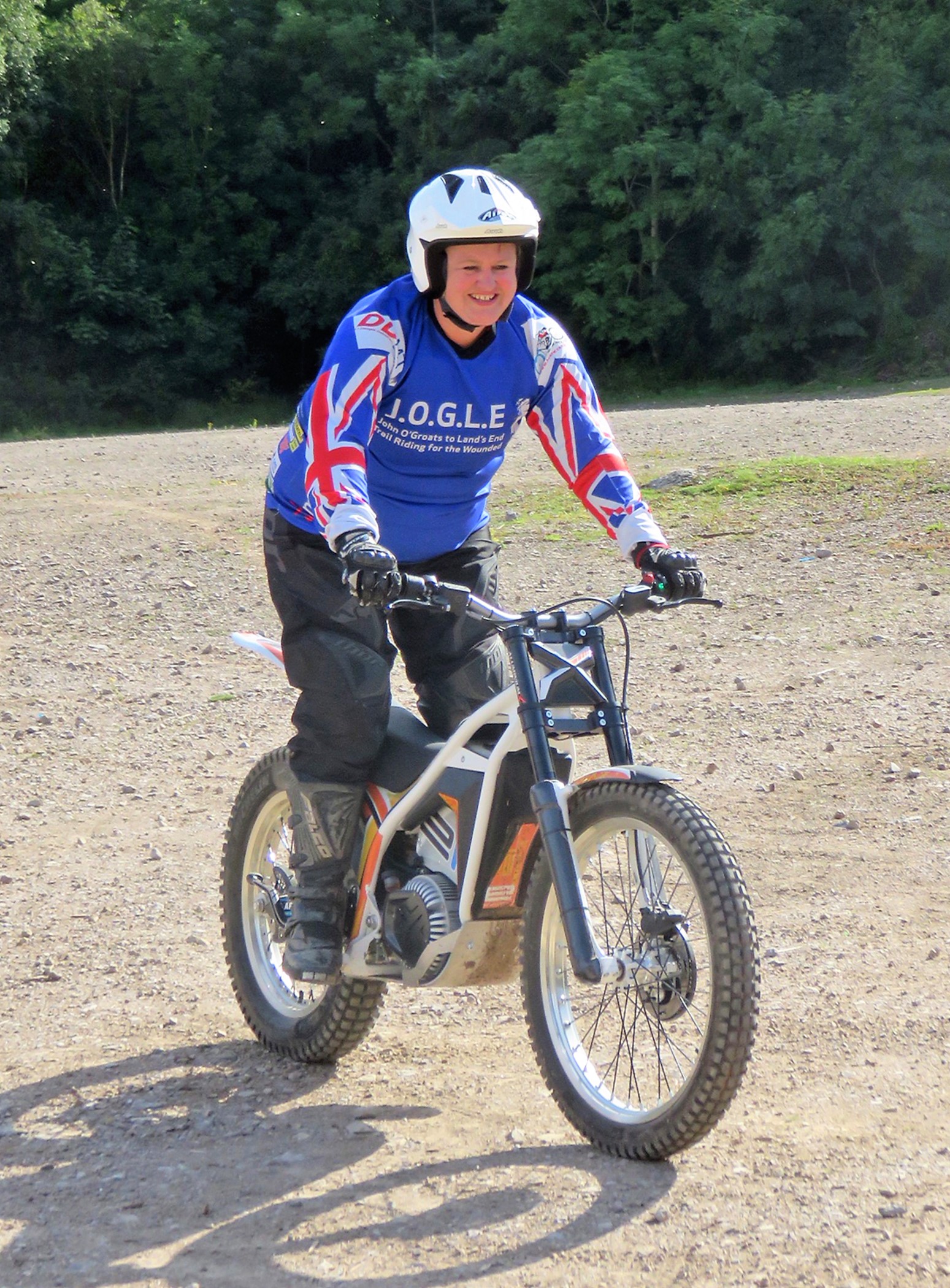 TRF Director Carla McKenzie is a fan of electric motorcycles.

In the autumn of 2015 I went to the EICMA show in Milan for the first time since 2011. There was a host of new electric motorcycles, scooters and pedelecs, from a dozen different marques, plus children’s electric motorcycles from the likes of Beta and Torrot. (Talking of Torrot, the Catalonian company were the saviours of GasGas and they already have adult electric mopeds and scooters in production; I fully expect to see an electric GasGas dirt bike on sale within the next five years.) I was also surprised to discover a new Italian electric brand that I’d never heard of: Armotia. Armotia showed both a trailbike and a supermoto version of their new machine, and both came with two wheel drive – much easier with electric power than with the fluid drive to the front wheel of Yamaha’s pioneering 2-Trac WR450. 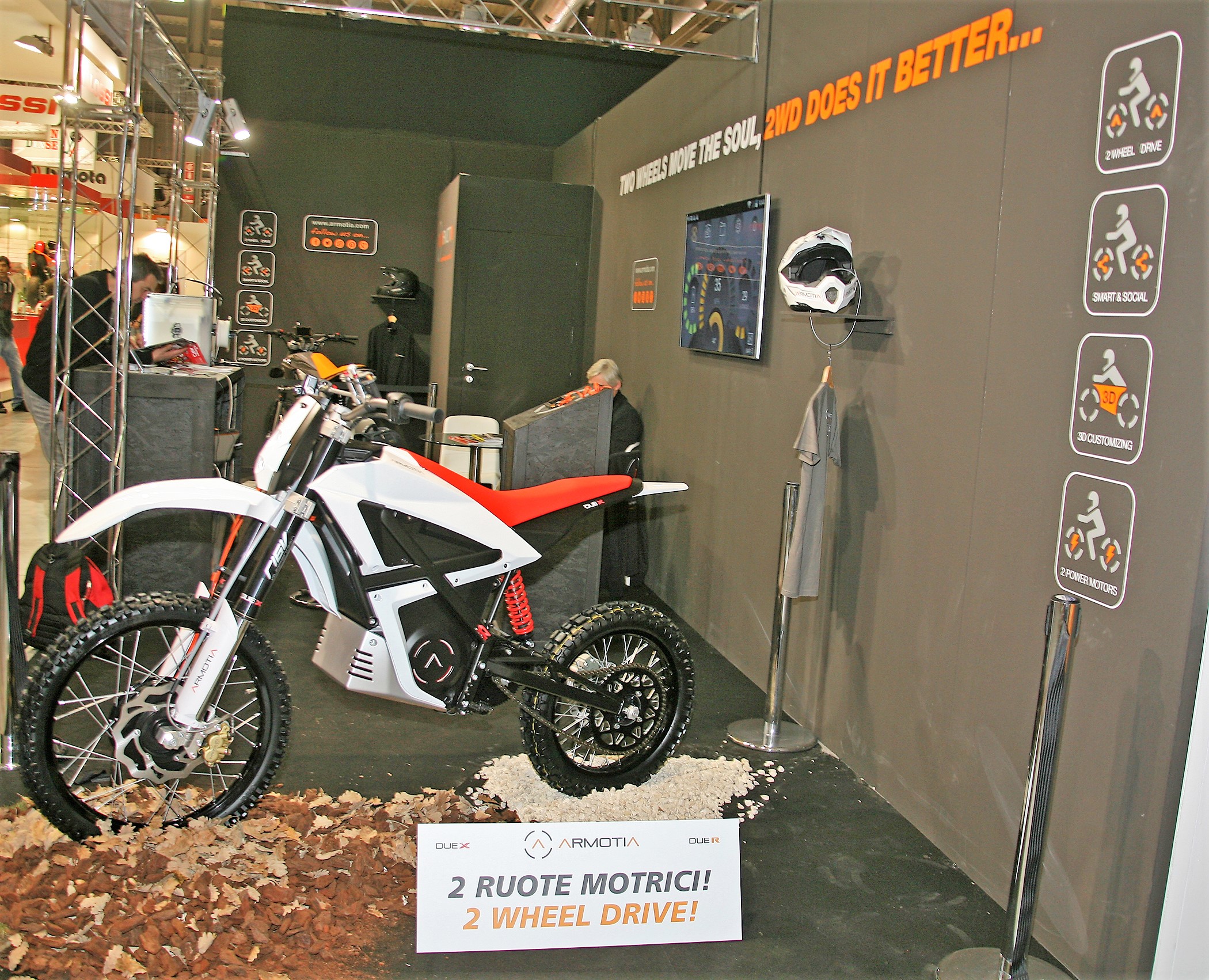 EM also launched a road-legal electric trail bike at the show, though surprisingly the Italian Tacita brand were not, though they were the first company to enter an electric bike in a rally, way back in 2012! 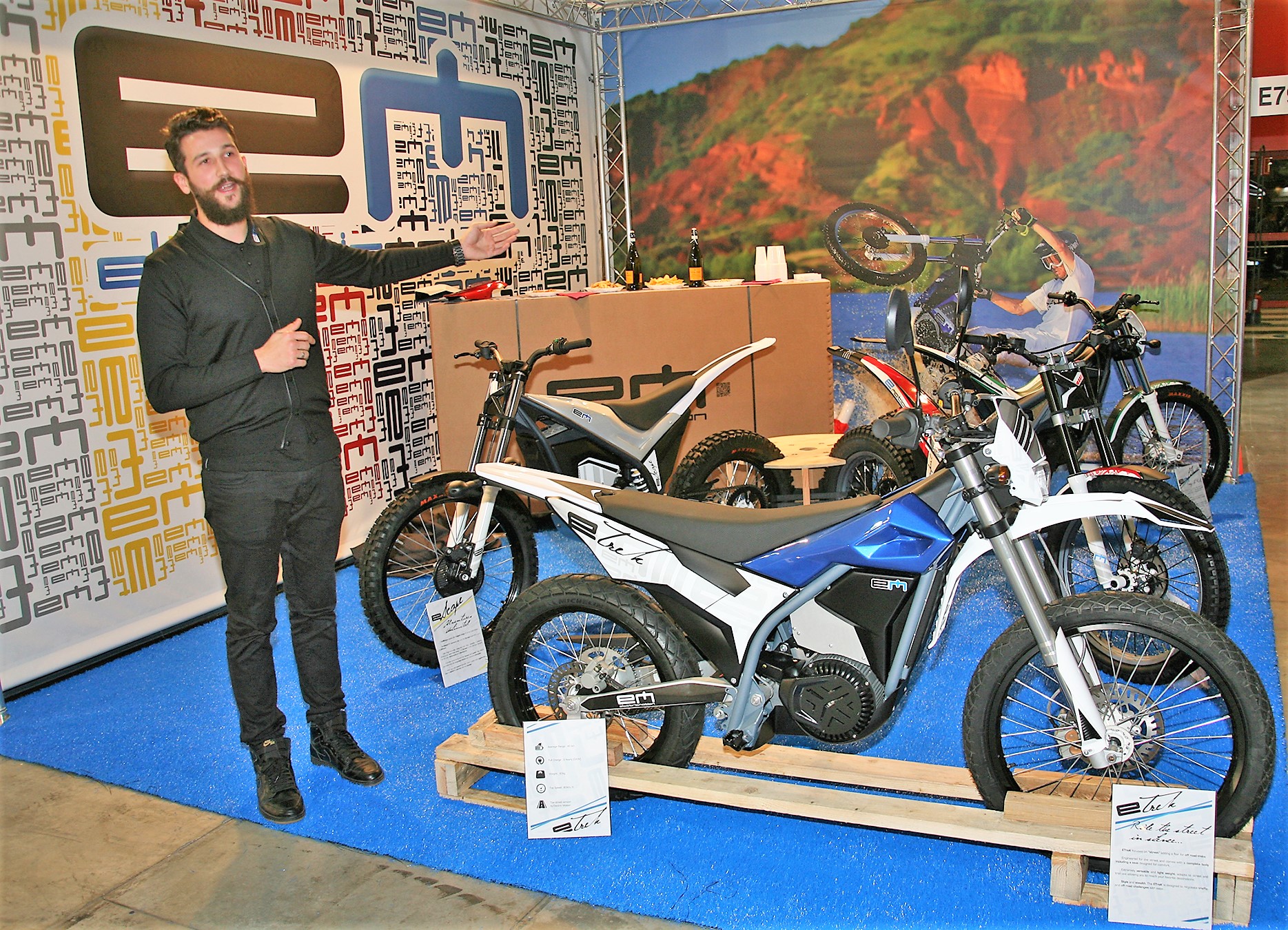 A Tacita riding through Moroccan sand.