Sunday’s Somerset TRF Forest Ride was followed by a TRF general meeting, which was attended by around ninety members including directors Michel Sabatier, Dave Carling, Stewart Bosworth, and Mario Costa-Sa.

The purpose of the meeting was to vote upon critical decisions required to ensure effective TRF function and governance in the immediate period ahead, though not before a complimentary cream tea... 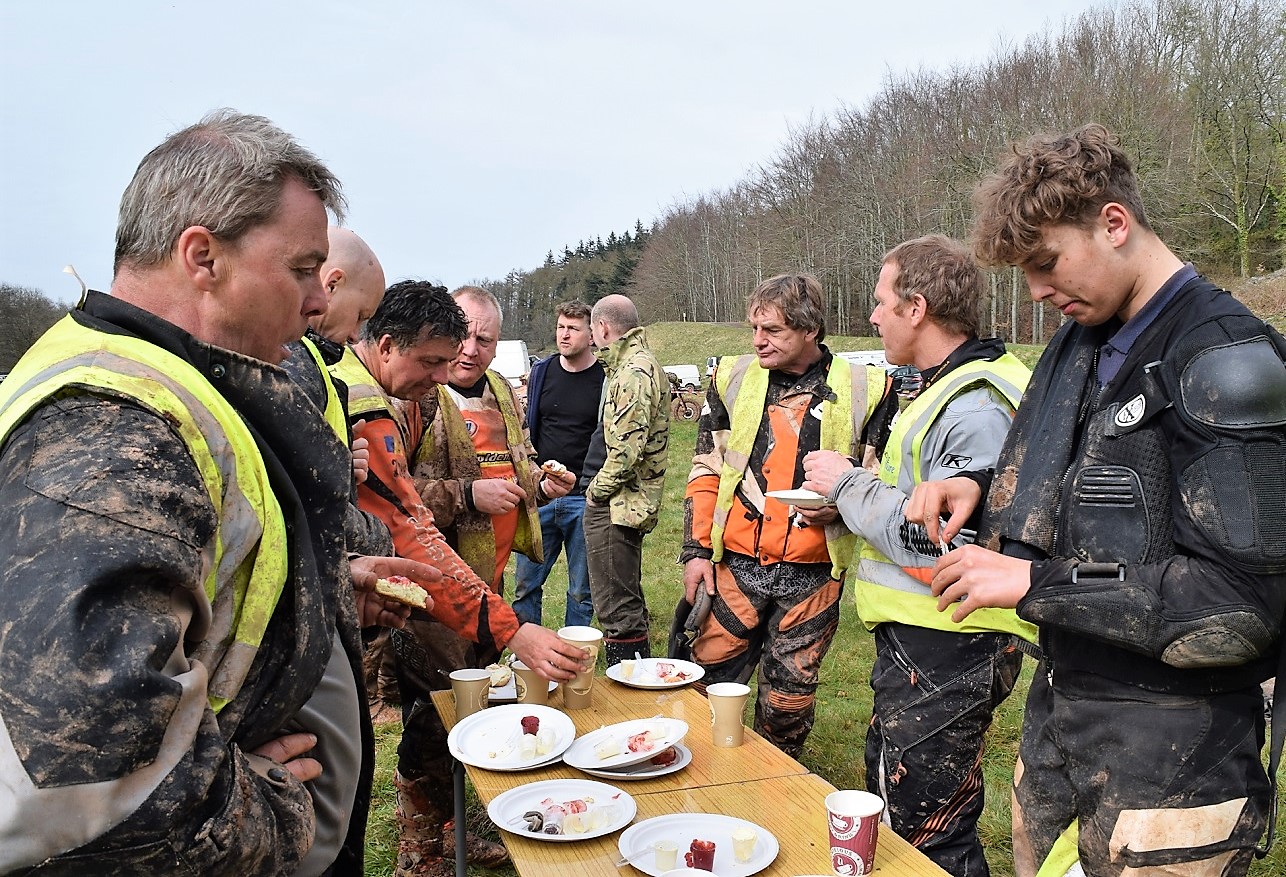 Here’s what TRF Chairman Mario Costa-Sa had to say:

A big thank you to the Somerset TRF team led by Martin Keswick, for hosting the General Meeting last Sunday, at what was possibly the largest event that the TRF has ever seen.

The site was impeccable, reminiscent of the “Hameau de La Reine, Versailles”. Many thanks to Mr W. Theed, the owner of the historic Combe Sydenham Country Park for use of his land adjoining the beautiful Elizabethan surroundings. The catering was superb as ever, although we missed the venison burgers, enjoyed on our last visit. In its place TRF members were rewarded by a proper Somerset cream tea provided by Martin’s daughter, which everyone knows is: cream first then jam, with a spilt scone, definitely without dried fruit, and accompanied by bottomless cups of builders tea.

The course offered something for everyone – especially intermediate and the experienced. The Somerset TRF team of marshals were very much in evidence at the recent TRF ACU Clerk of Course event and with so many fully trained and certified volunteers available it is not surprising this event ran like clockwork. The Somerset TRF Exmoor Forest ride is now the benchmark standard in how the TRF organise a well-run event. 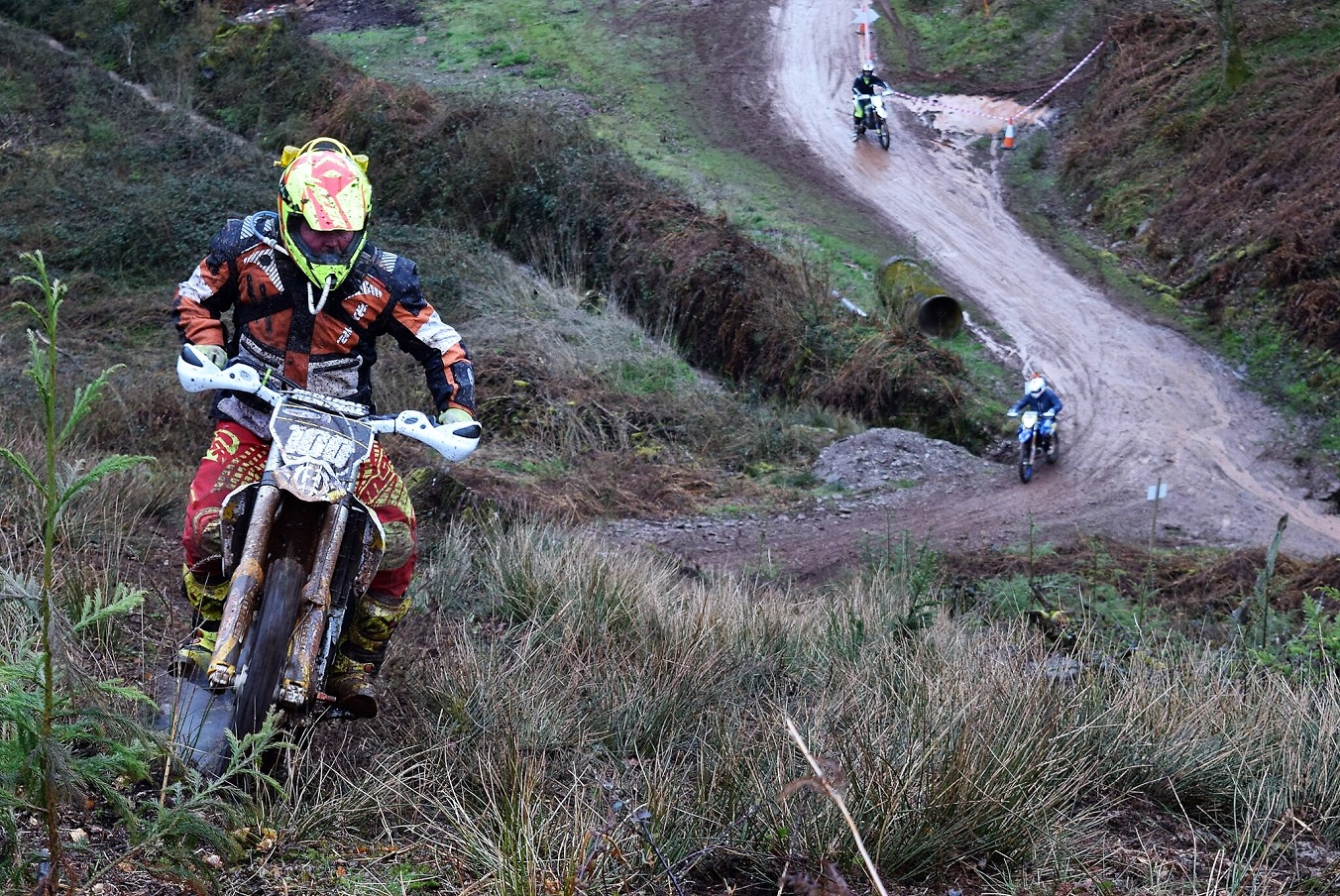 The course offered something for everyone.

The event was also a great way of ‘reaching out’ to potential new members:

Martin informed us that over 400 riders came for the event of which more than half were TRF members. This shows us how important these events are in attracting new and younger riders to the TRF and broadening our membership composition. Of these I understand around 70 riders simply turned up and paid full price on the day. Given the discounts for TRF members and early registration this shows that riders are not necessarily as price sensitive as many imagine, and the overall TRF offer is more important to them. 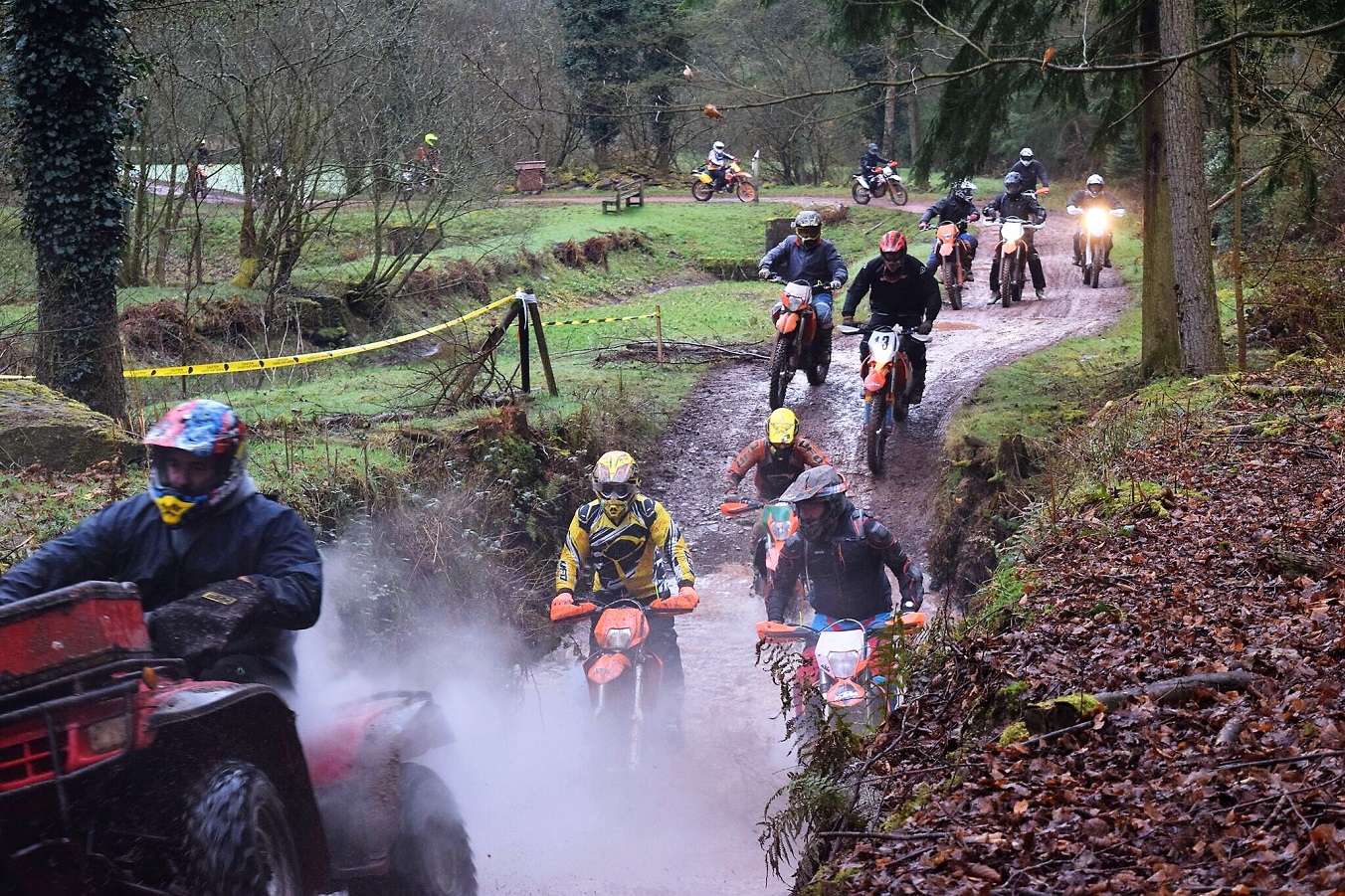 The event attracted plenty of non-members.

In amongst the muddy faces were riders I recognised from East Anglia and the West Midlands – demonstrating the demand for well-organised events. A few notable people too:

With so many riders there it was impossible to mention everyone. I did hear Austin Vince was present in his hreen TRF overalls (and very clean they were too – ed.), and I did see a mud caked Gabriel Bolton of Zen Overland coming up to thank Martin Keswick for the event. Even more memorable was the legend that is Dr Alcuin Wilkie – caught having a quick, in retirement, cat nap during the meeting. I am pleased to mention that Austin Vince has agreed to host a future TRF meeting later this year possible around Motorcycle Live. 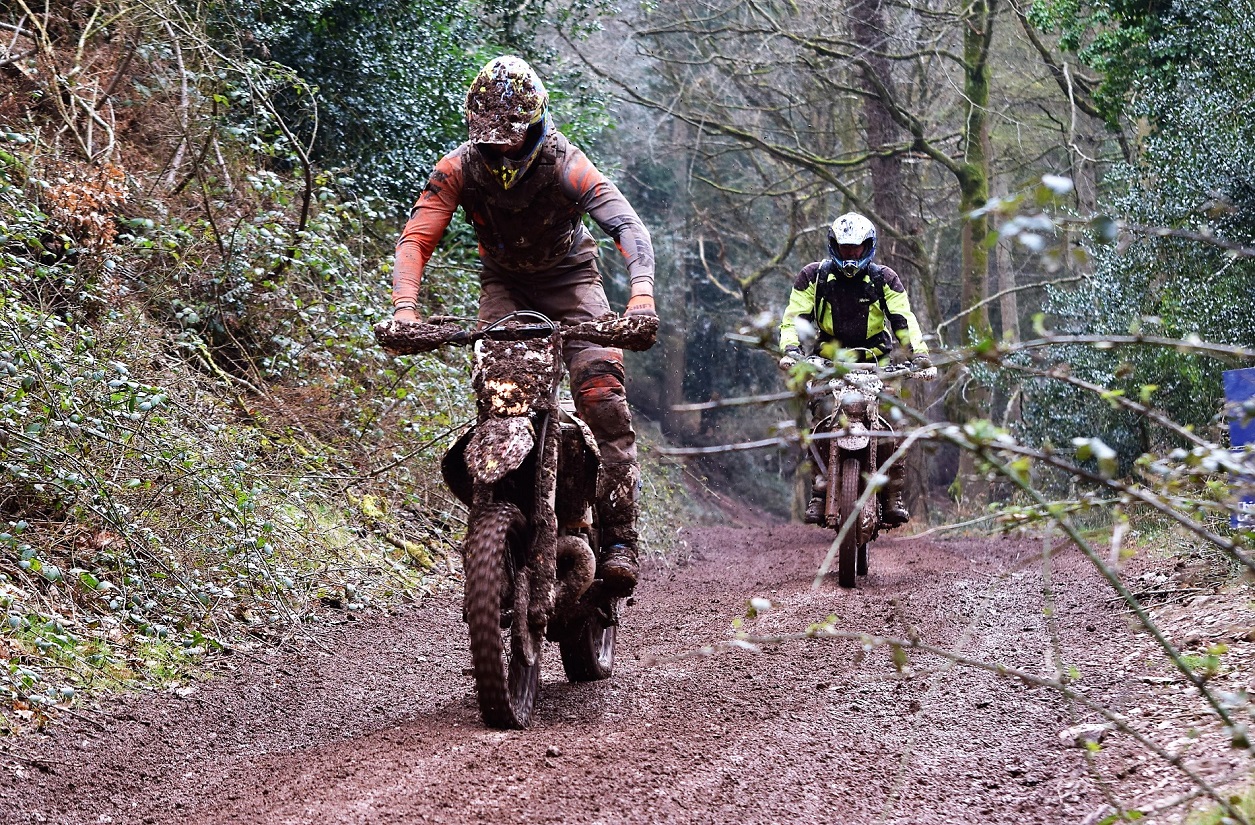 We had our say too:

From the TRF members at the riding day almost half stayed to attend the General Meeting, and showing that given the right environment, it is possible to engage members in person to the wider decision making of the TRF. 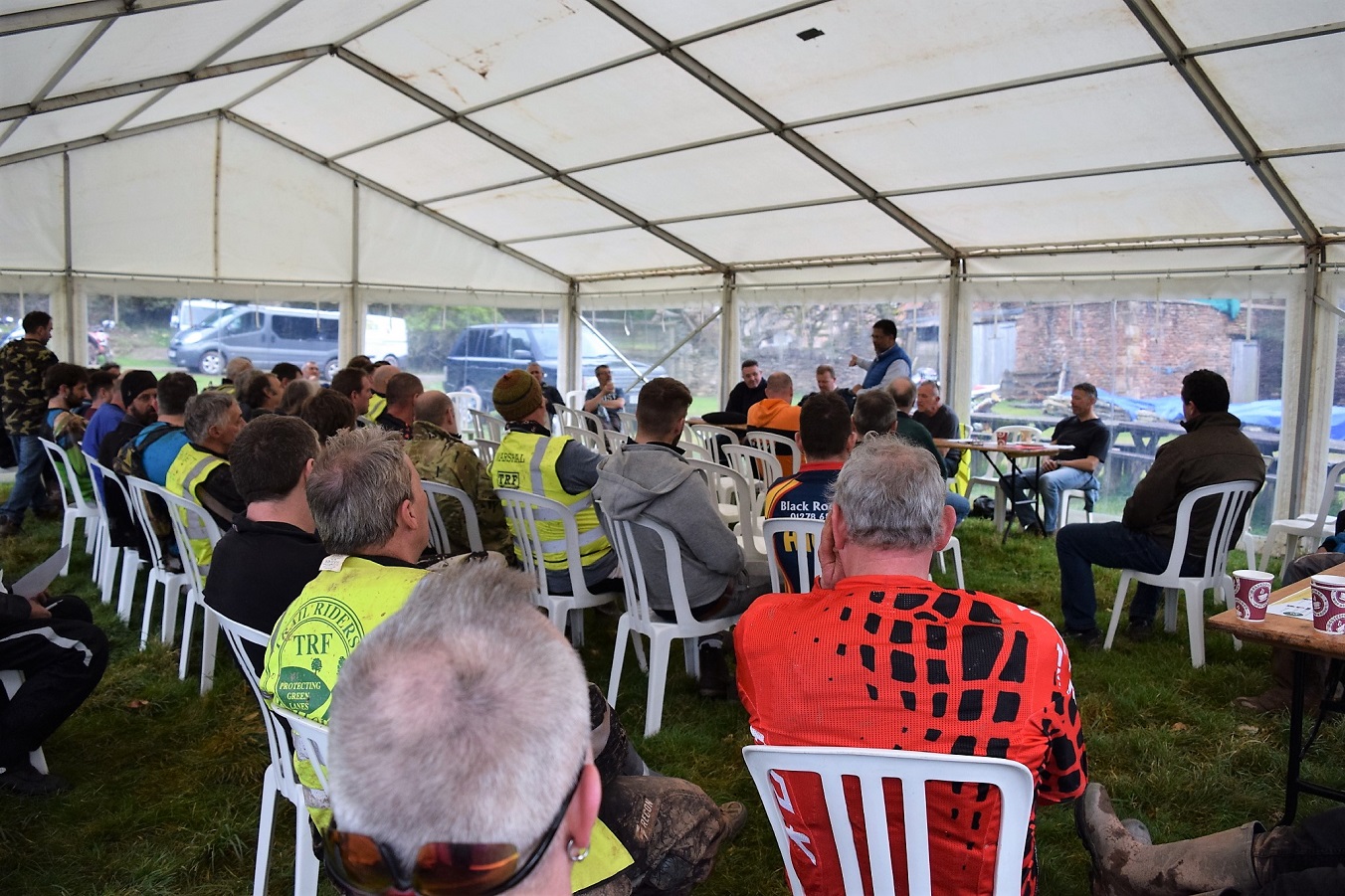 Members were keen to get involved in the meeting.

Martin ensured everyone had their say without detracting from the proceedings:

Martin made it clear at the beginning of the meeting that the resolutions had been formed from the responses of members to TRF surveys and consultations, and were open for voting but not for change on the day. He actively encouraged questions to be asked, and responses were given both from Directors and TRF veterans.

Charlie Morris – a former TRF Director – enlightened us with his positive views on the resolutions. On one contentious issue, the membership fee increase - to pay for Trail magazine; a poll was taken which helped the room understand the strength of feeling on both sides of the difficult decision to be made.

As a result of the Chairman Martin’s efficacy the meeting was completed to everyone’s satisfaction and decisions made with the whole meeting taking around 45 mins. 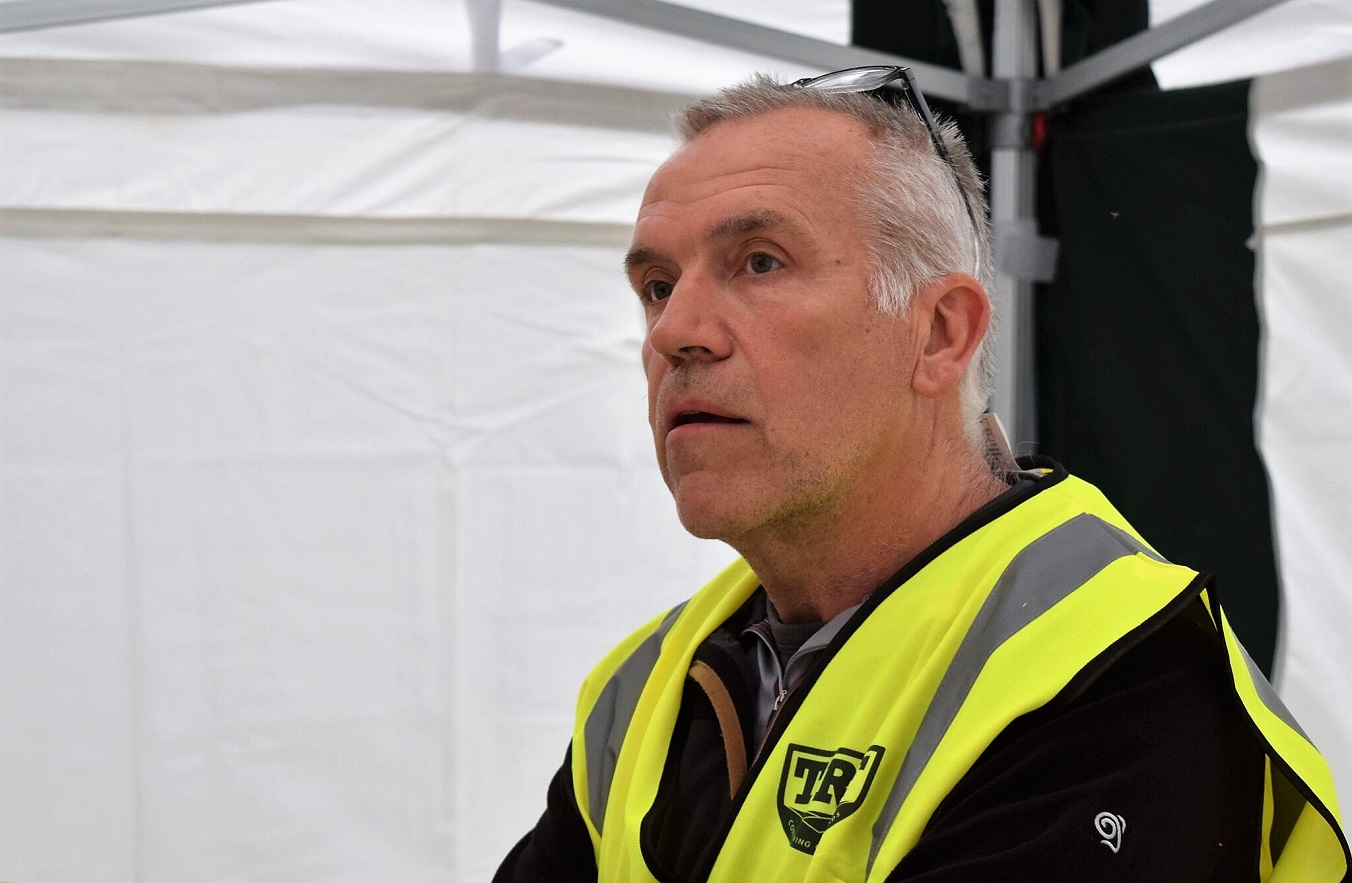 Martin ensured both the event and meeting functioned smoothly.

Commercial partners saw the benefit of the event as well:

Trail bike dealers, AT Motorcycles of Weston were present with a stand promoting a current TRF favourite, the Beta. They were offering test riders around the track to interested potential customers. The economic value of trail riding and the commercial partners is an area of focus for the TRF. 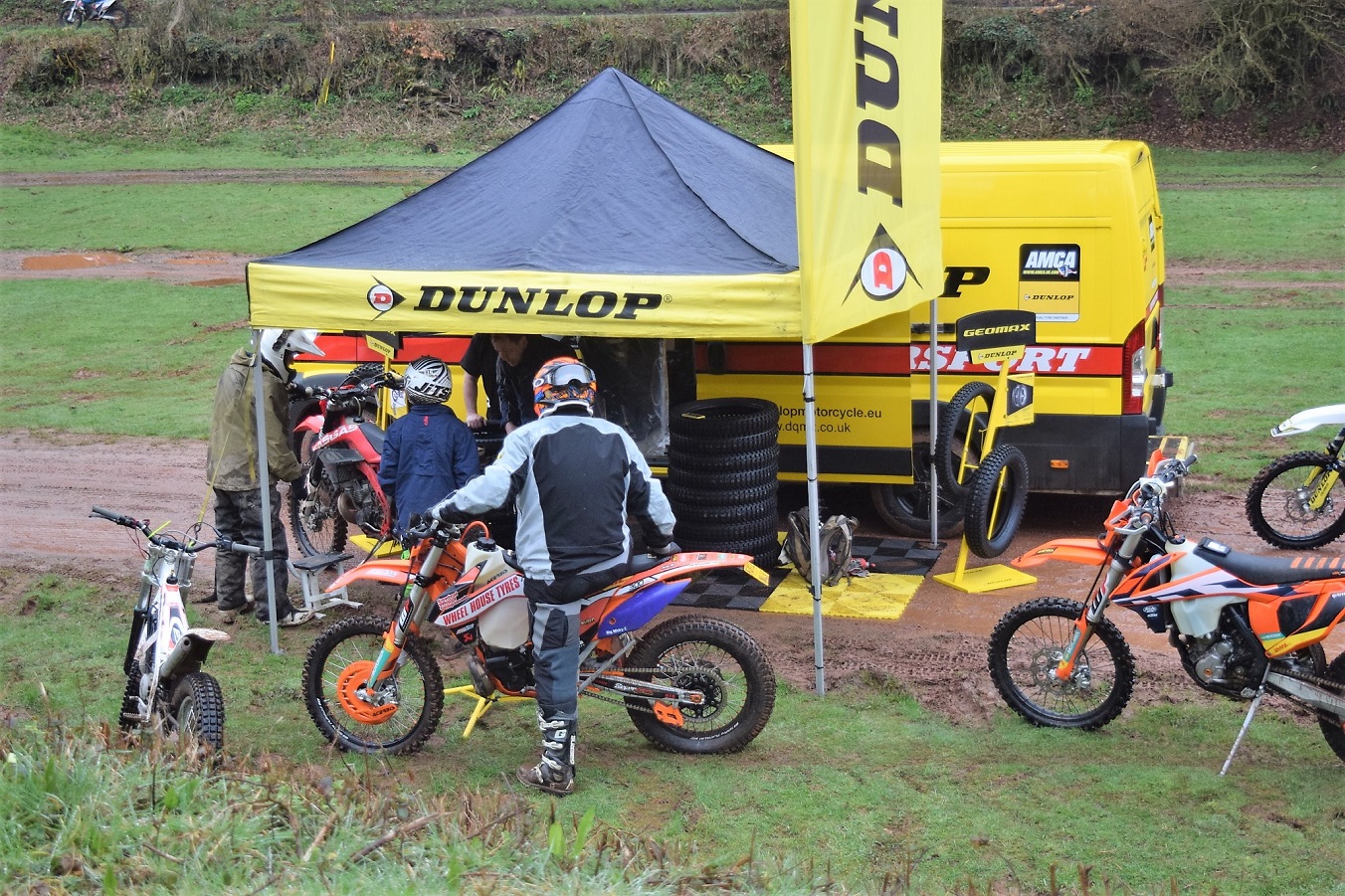 AT Motorcycles were present with tyres, tubes and consumables.

All resolutions in the notice were voted in.

The current directors were re-appointed and retirement terms agreed.
Doug Cartwright was appointed as a Director.
New Bylaws were adopted.
The membership fee was increased to cover the cost of Trail Magazine.
The TRF Aims & Objectives were adopted.
The Code of Conduct (2018) was adopted.

Out thanks to the two voting tellers- Martin Welch, Chair of Oxford TRF and Steve Coward of Wiltshire TRF plus the other helpers who worked together to record votes in record quick time.

Our Finance Director Michel Sabatier will be publishing the final voting figures and it is understood there was an overwhelming majority – approx. 90% in favour of all resolutions.
Minutes of the Meeting 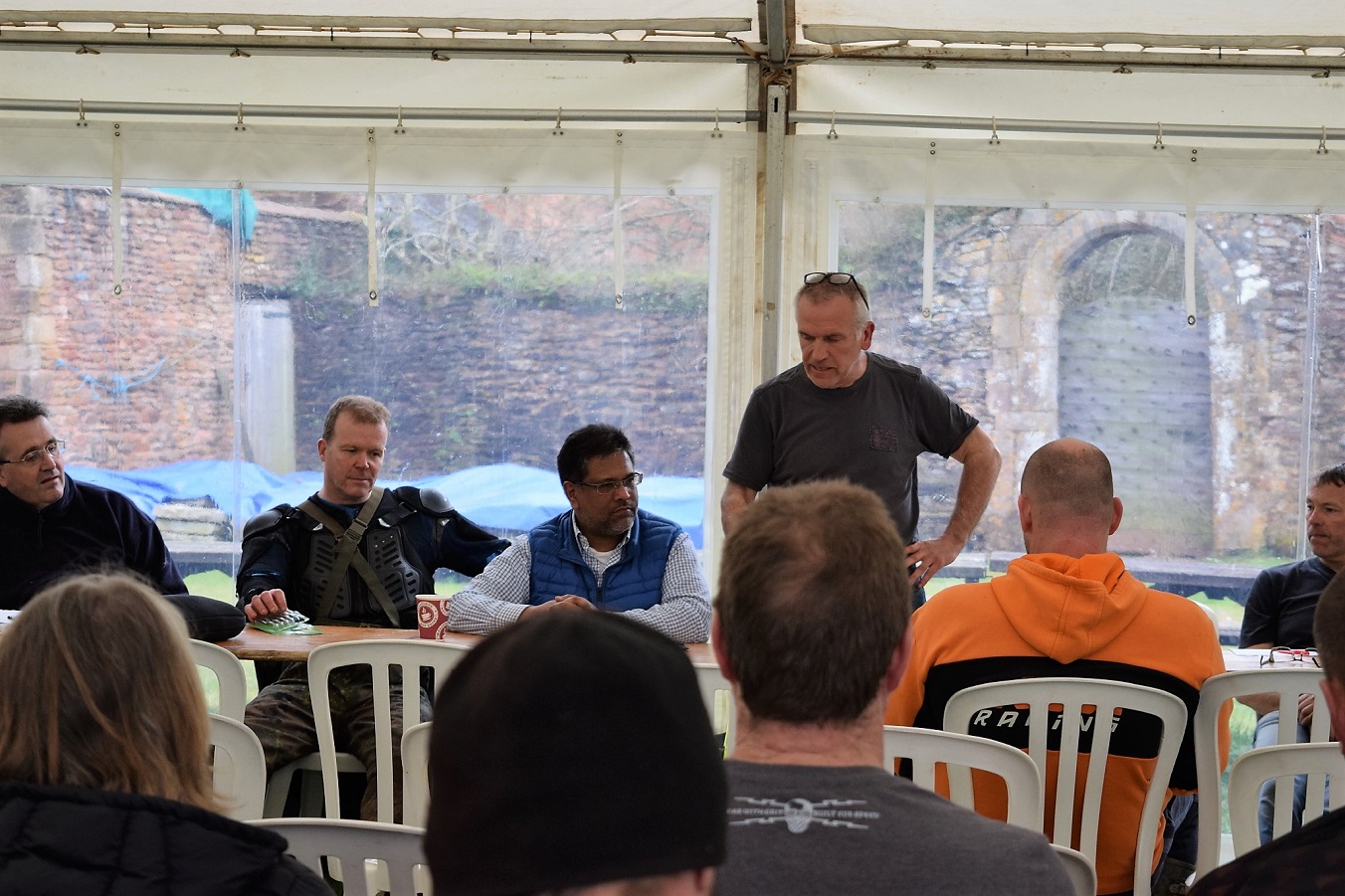 Proposal for meetings and TRF decision making in future were made in the current Spring Trail magazine. The majority of these meetings including AGMs will be centred around riding events. The meeting proved that debates need not be dreary, and we can still have fun whilst making important decisions. Engaging over 400 riders is a spectacular sight and an opportunity for the TRF to show that it has critical mass. 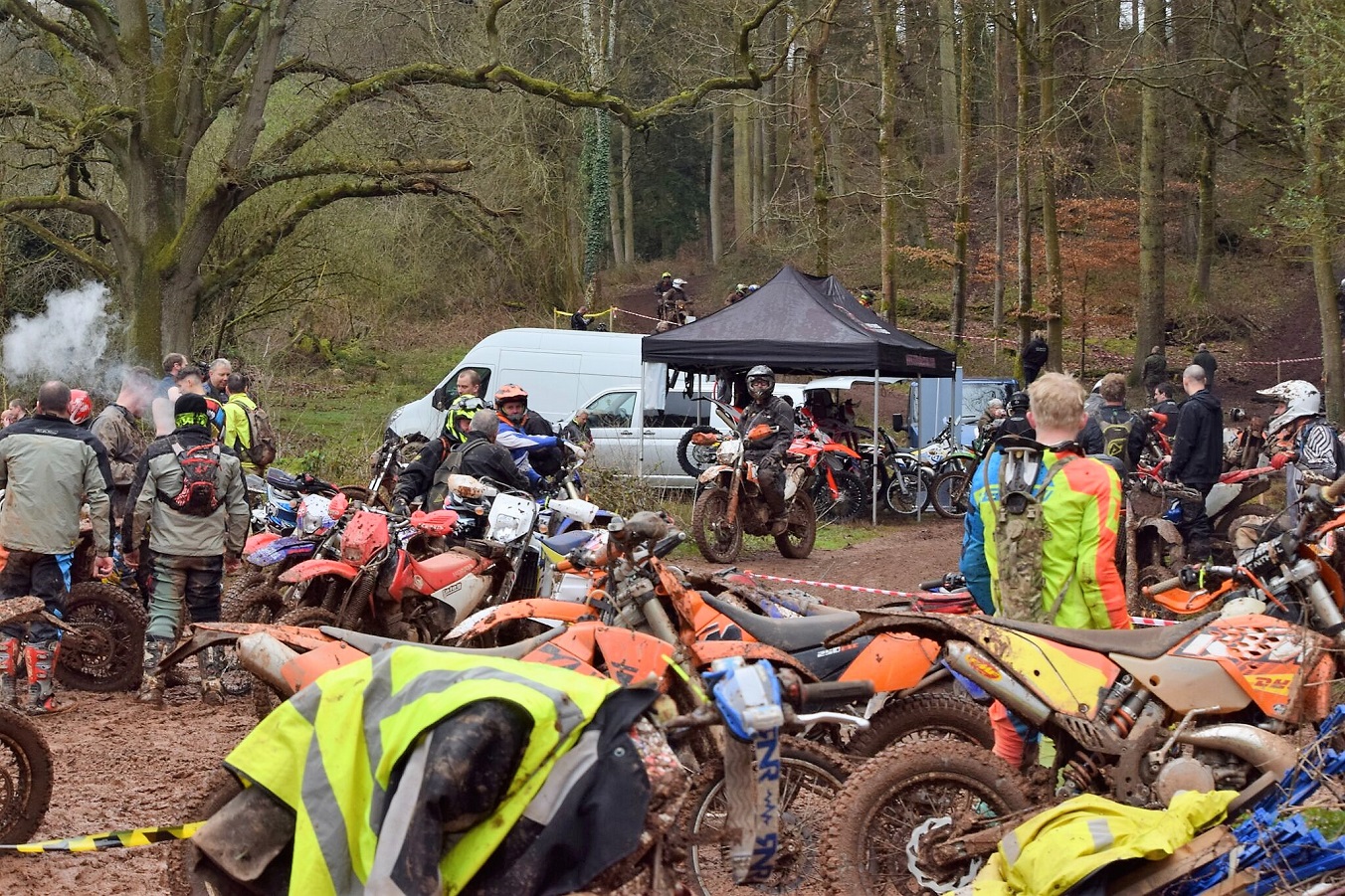 Critical mass at the refreshment stop.

The Trail Team will work on communicating change to members through web Trail, Email and Trail Magazine.

In particular a rewrite of the Code of Conduct page will be done and a separate notice explaining to members the changes in regulations and guidance.

The undoubted success of this General Meeting has set a high bar for future events, and also give us a shape of things to come at the forthcoming Annual General Meeting to be held at Wern Du Quarry on Saturday 26th May:
AGM at Wern Ddu Quarry
The AGM event will be hosted by North Wales TRF and Chaired by Eddie Evans, Chair of North Wales TRF. 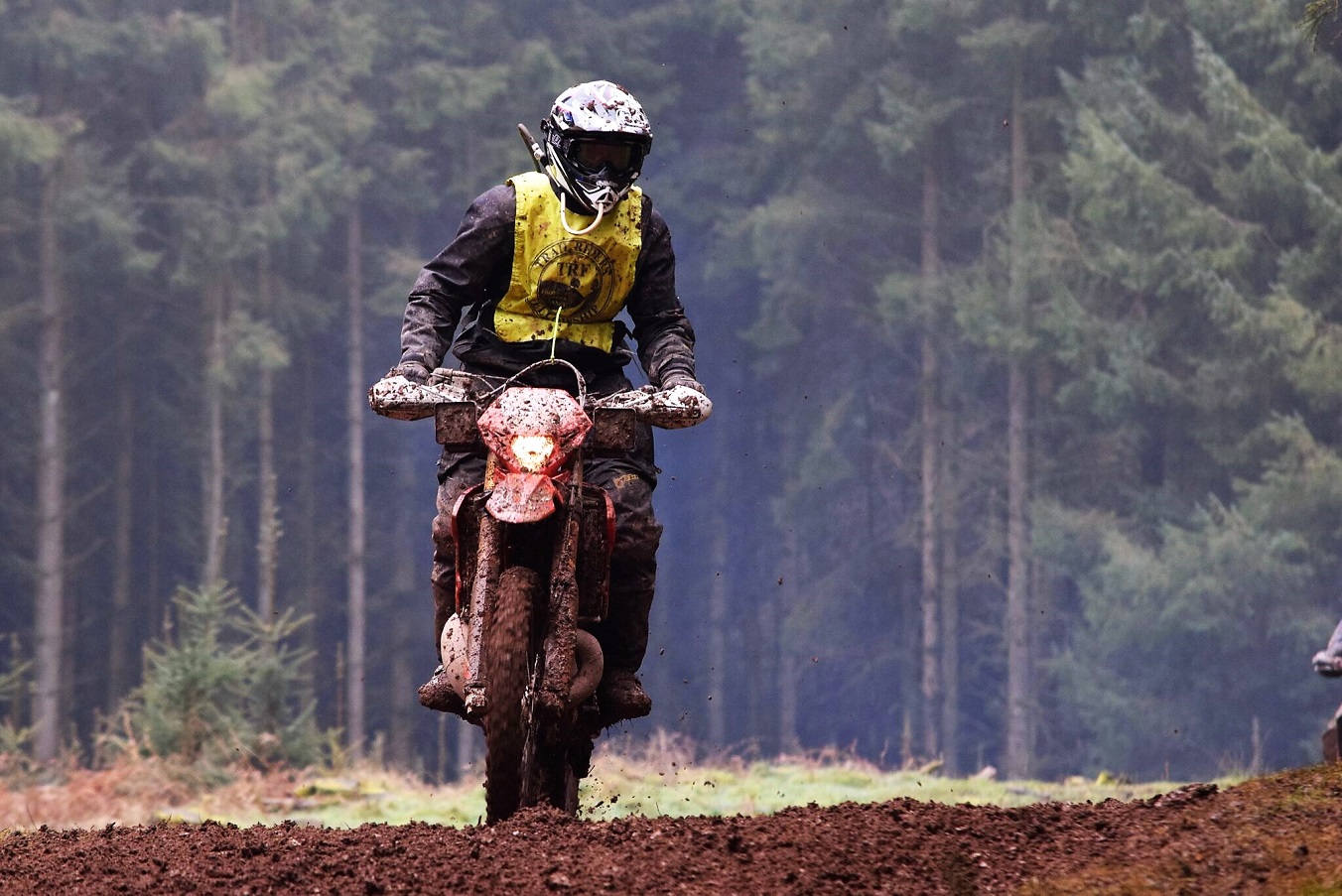 Thank you to all the volunteers who made the event so successful.