The event has a reputation for being one of the more testing long-distance trials, and incorporates many of the unsealed rocky hill roads that traverse the beautiful Wye Valley. 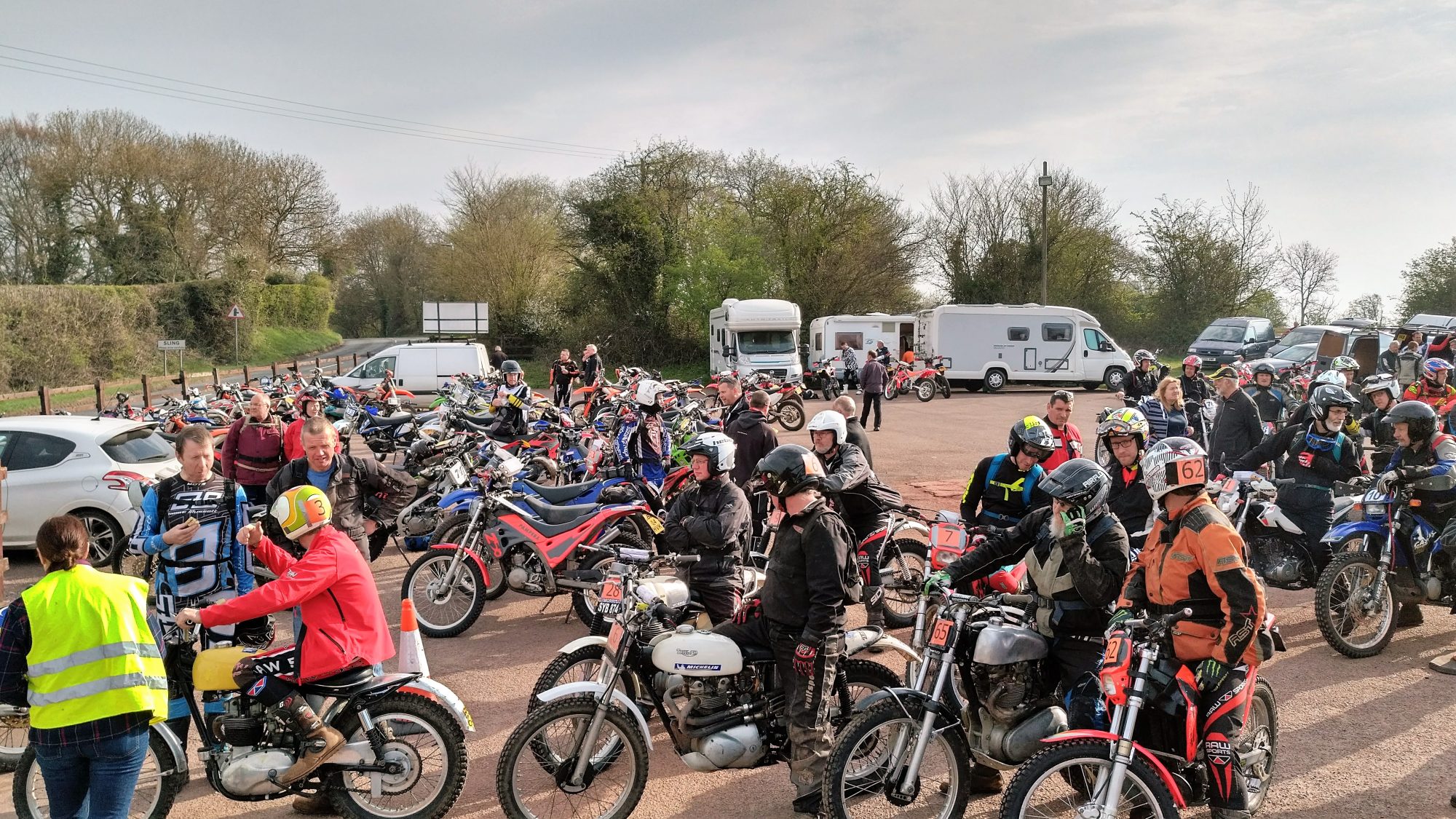 Competitors ready for the off. 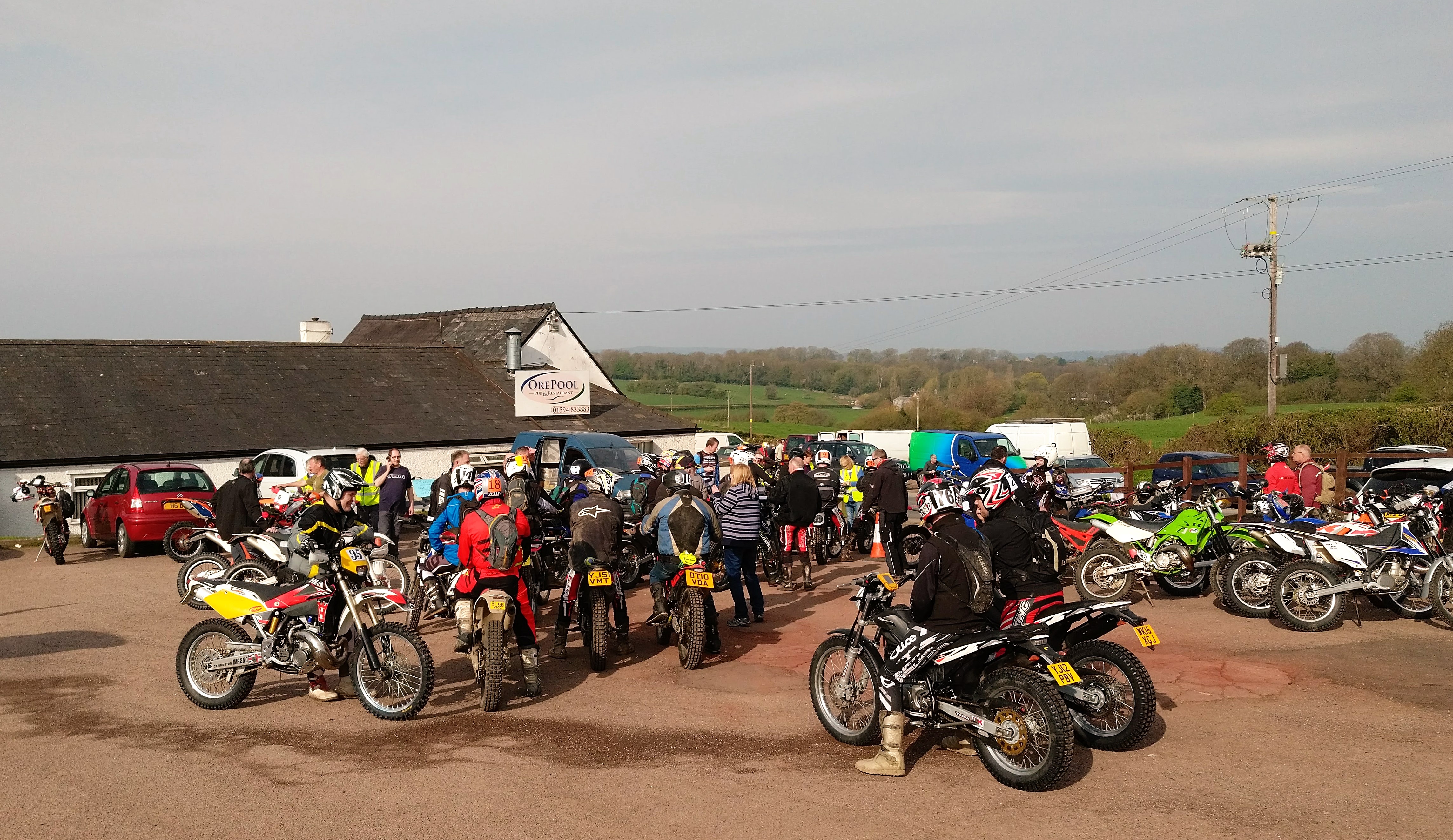 The Orepool Inn near Sling.

I had managed to secure a late start from the Orepool Inn and proceeded at a leisurely pace with my friend Damien towards the first of thirty-one sections at Mork Hill, which I surprised myself in clearing without a dab. We watched a few other riders repeat the same feat before riding on to cross the Wye at Brockweir.

On passing the ruined Tintern Abbey (video location for Iron Maiden’s anthemic ‘Can I Play With Madness?’) we made our way up Cold Well Lane to be greeted with a monumental traffic jam – clearly the rocky hill road was taking its toll on the field. We rode through the tiring ‘Limekiln 1’ section only to find it scrubbed from the final results – our pair of fives being a wasted exercise. 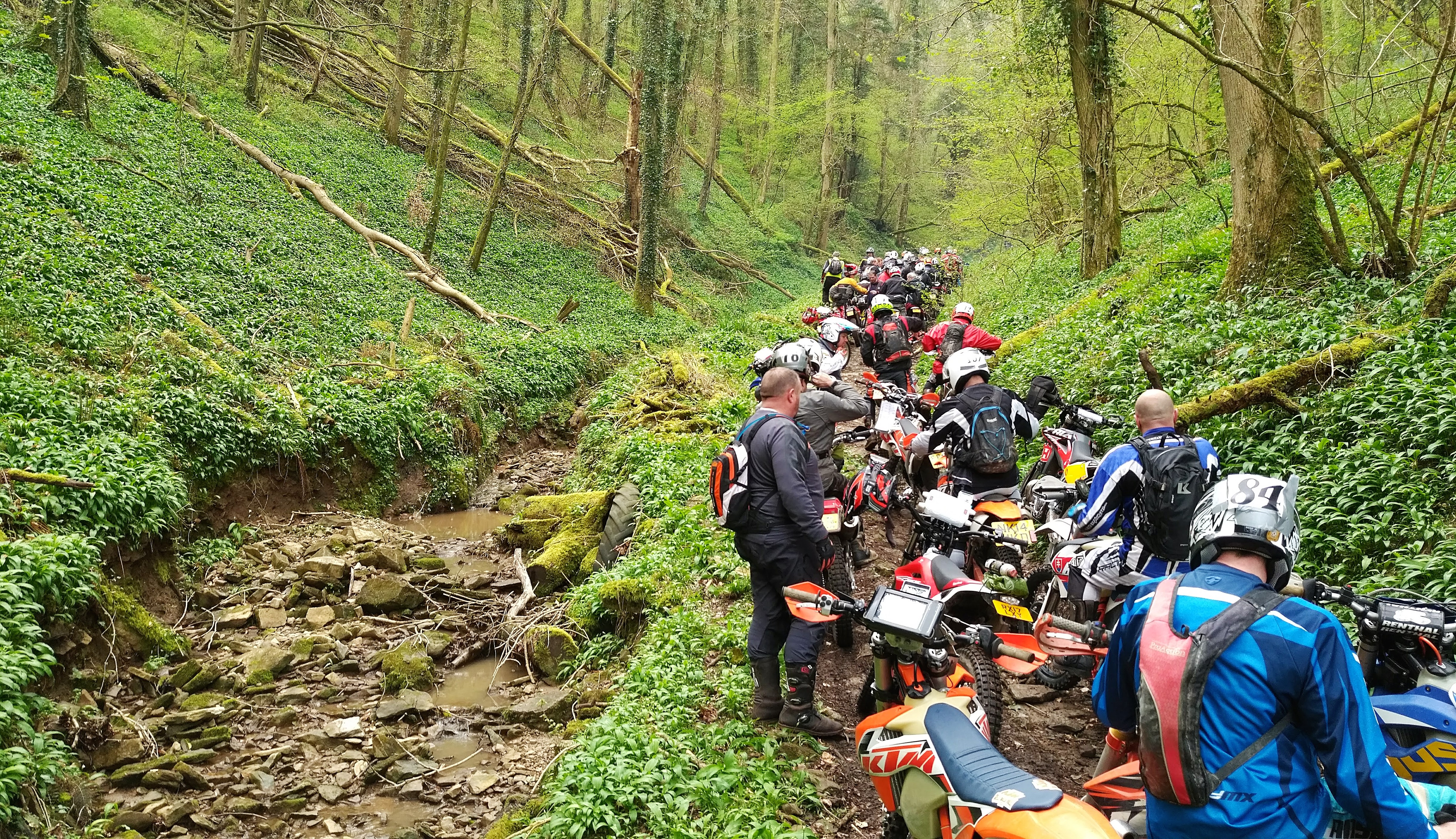 The queue for 'Limekiln' at Cold Well Lane. 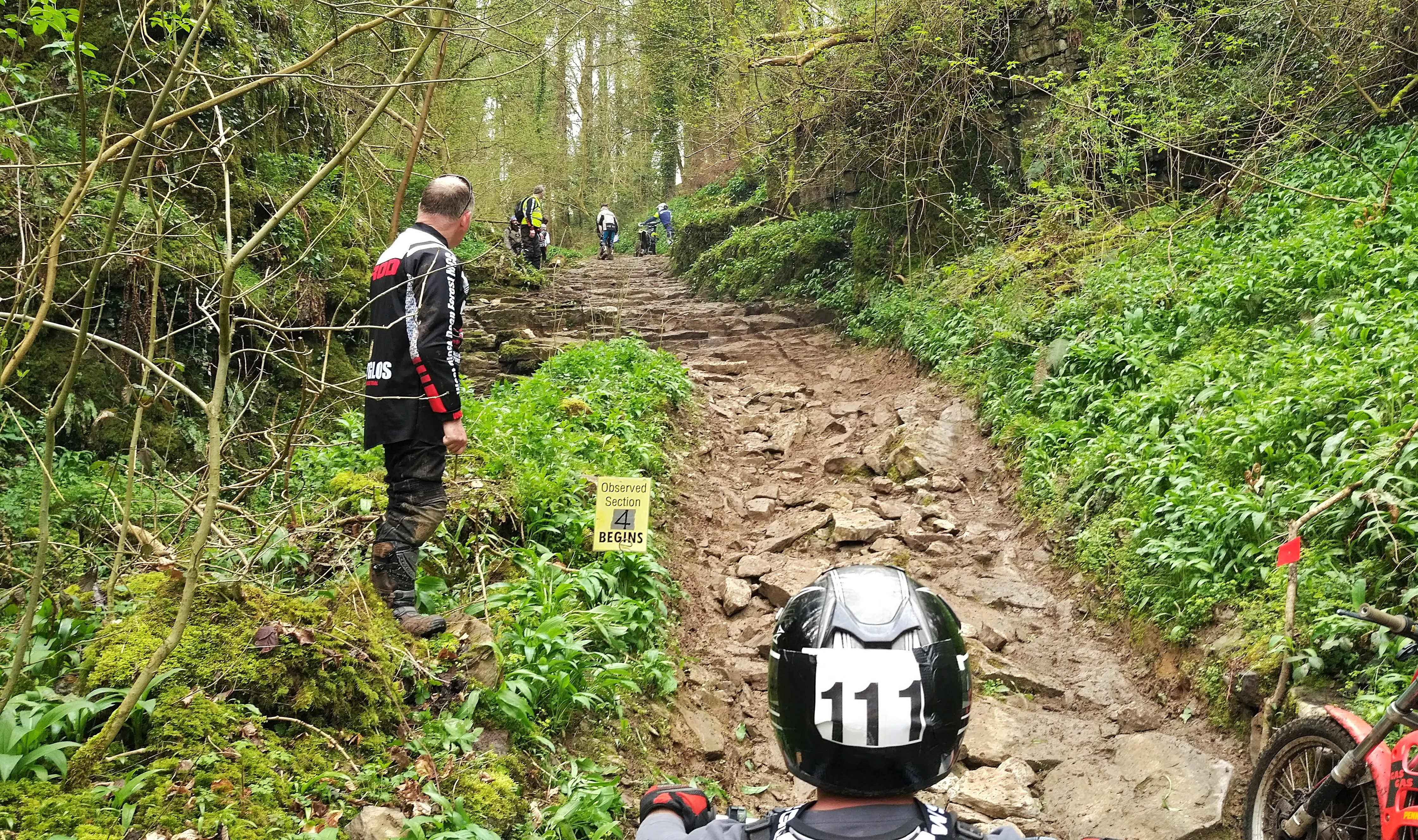 The start of section four - 'Limekiln 2'.

After ascending the steps of ‘Limekiln 2’ we watched one of the championship riders take the harder route up the stream itself, which featured this sizable rock step: 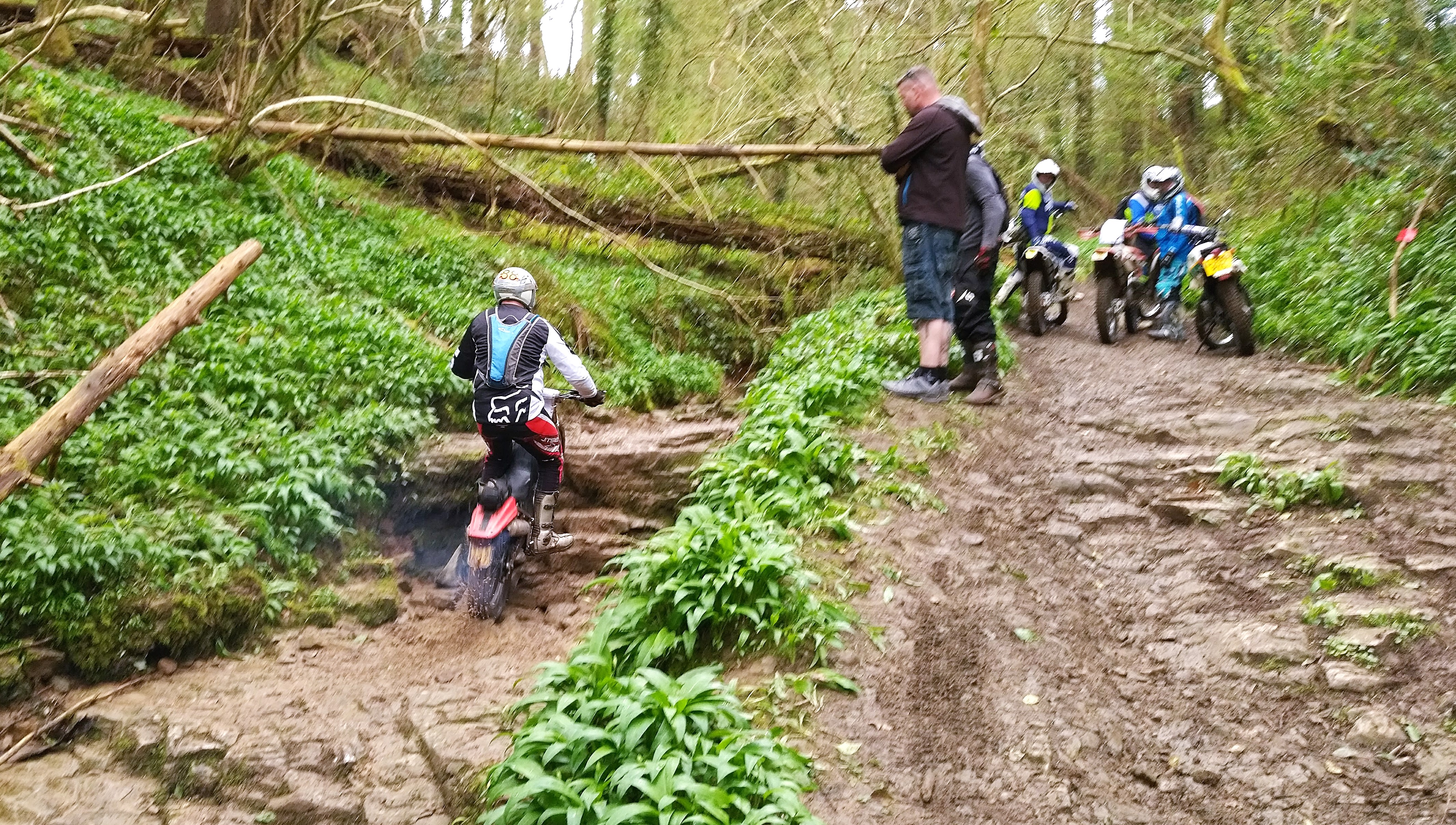 The ubiquitous GasGas Pampera made light work of this sizable step. 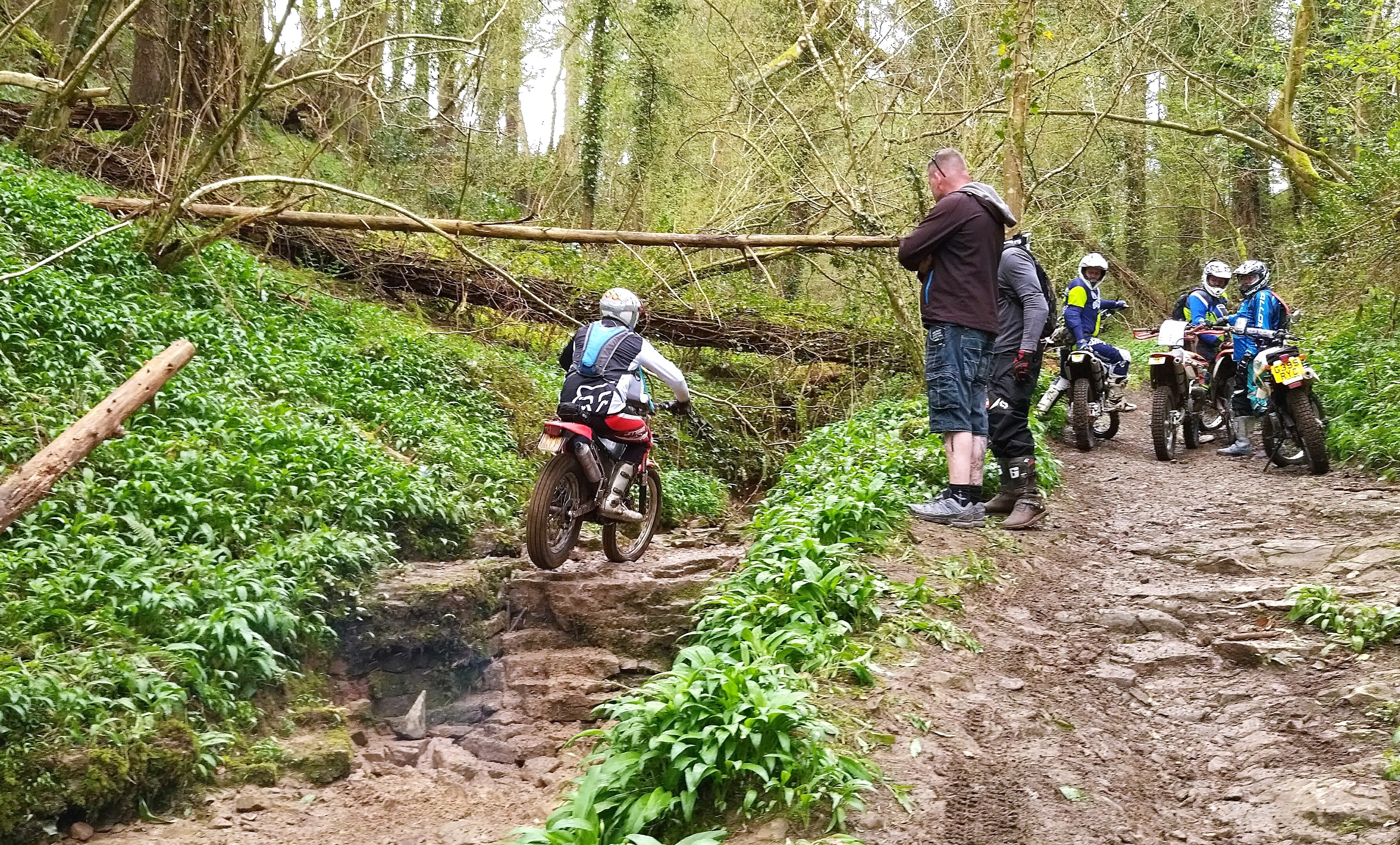 No sweat for the rider of this Pampy.

After a few road miles we arrived at Pen-y-glog Road at Llandegveth, just east of Cwmbran, which I immediately recognised due to the national speed limit road signs being reclaimed by nature either side of its ‘carriageway’. 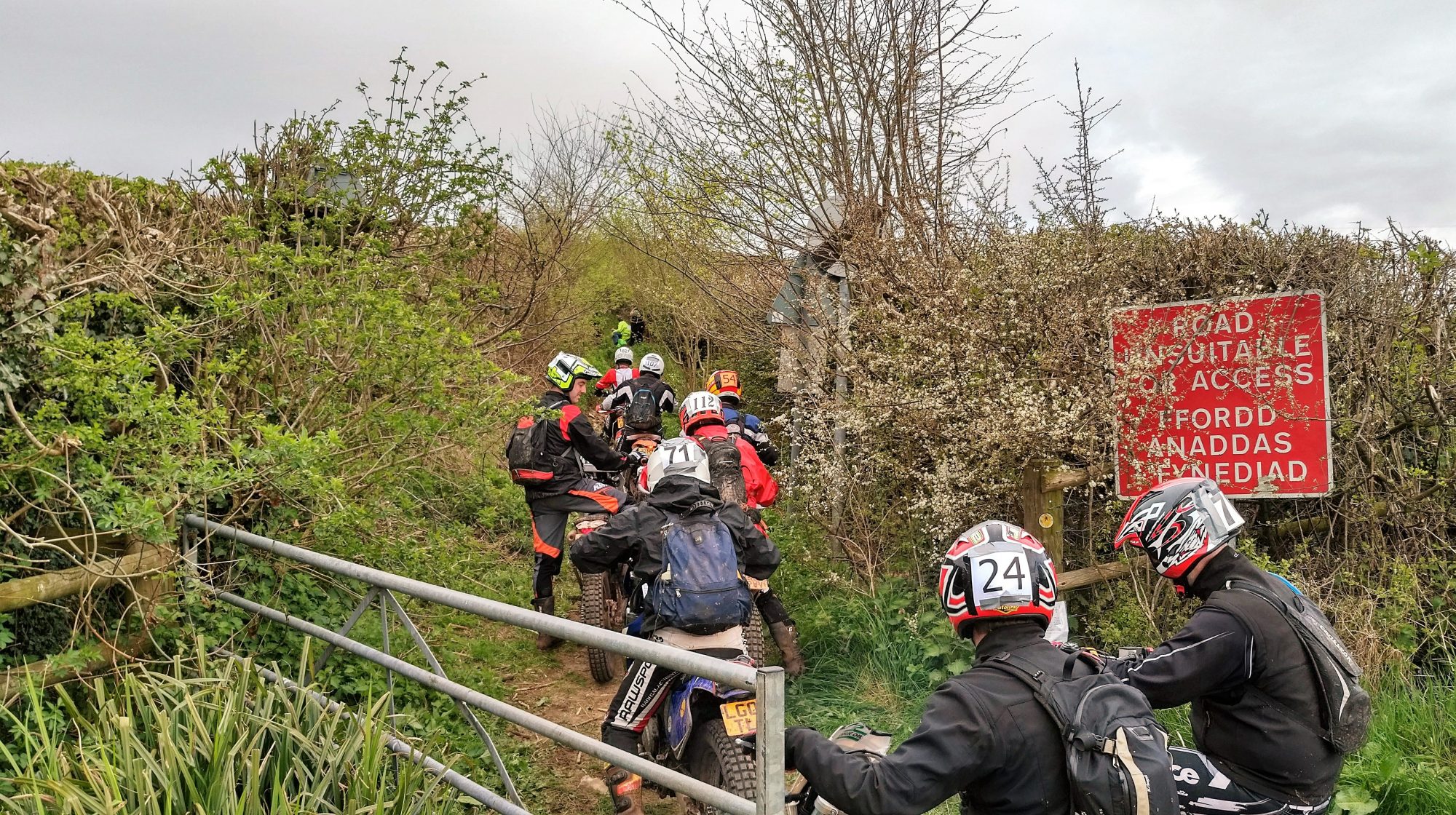 This green road is flanked by national speed limit signs!

I use the term ‘carriageway’ loosely because the lane is little more than a rocky slot flanked by hawthorn and nettles, which eagerly welcome any clumsy peg-basher with scratchy monotony. Thankfully the competitor behind me managed to compose his laughter for long enough to lift my XT225 Serow off my ankle, enabling him to thank me for giving him a breather on such a particularly unwelcome road – thanks Paul! 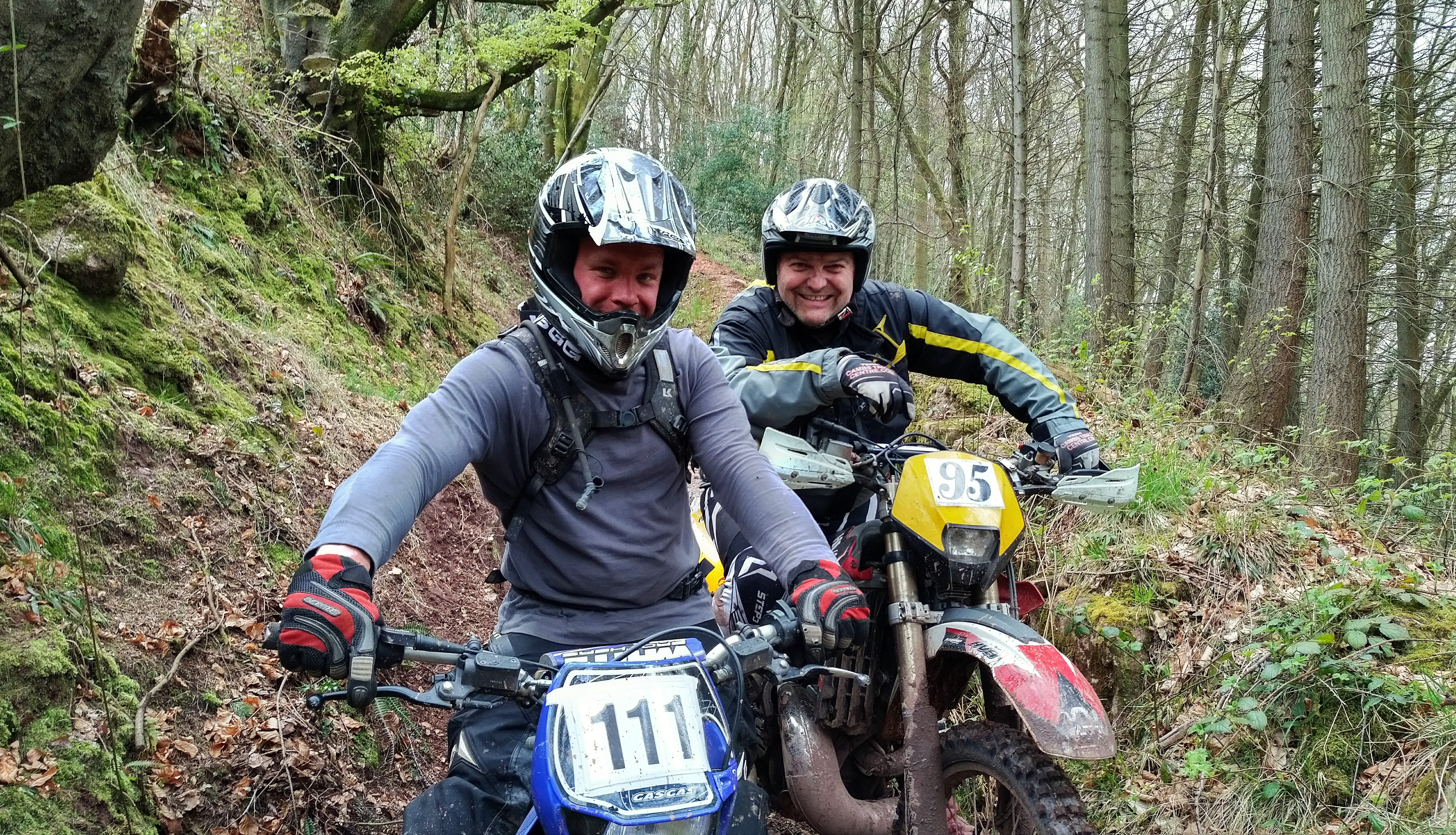 By now Damien and Paul were quite used to being held up.

A brief ‘petrol station lunch’ in Usk sorted me out well enough to secure three cleans in a row at Golden Hill, which helped reduce my overall score to something akin to a good round of golf. By this time Damien and I had noticed that Paul was a dab hand on his Husqvarna WR250 and clearly no stranger to trials riding, in spite of his admission that the event was his first LDT. Further questioning revealed he had access to a disused quarry on the farm where he lived – alright for some! 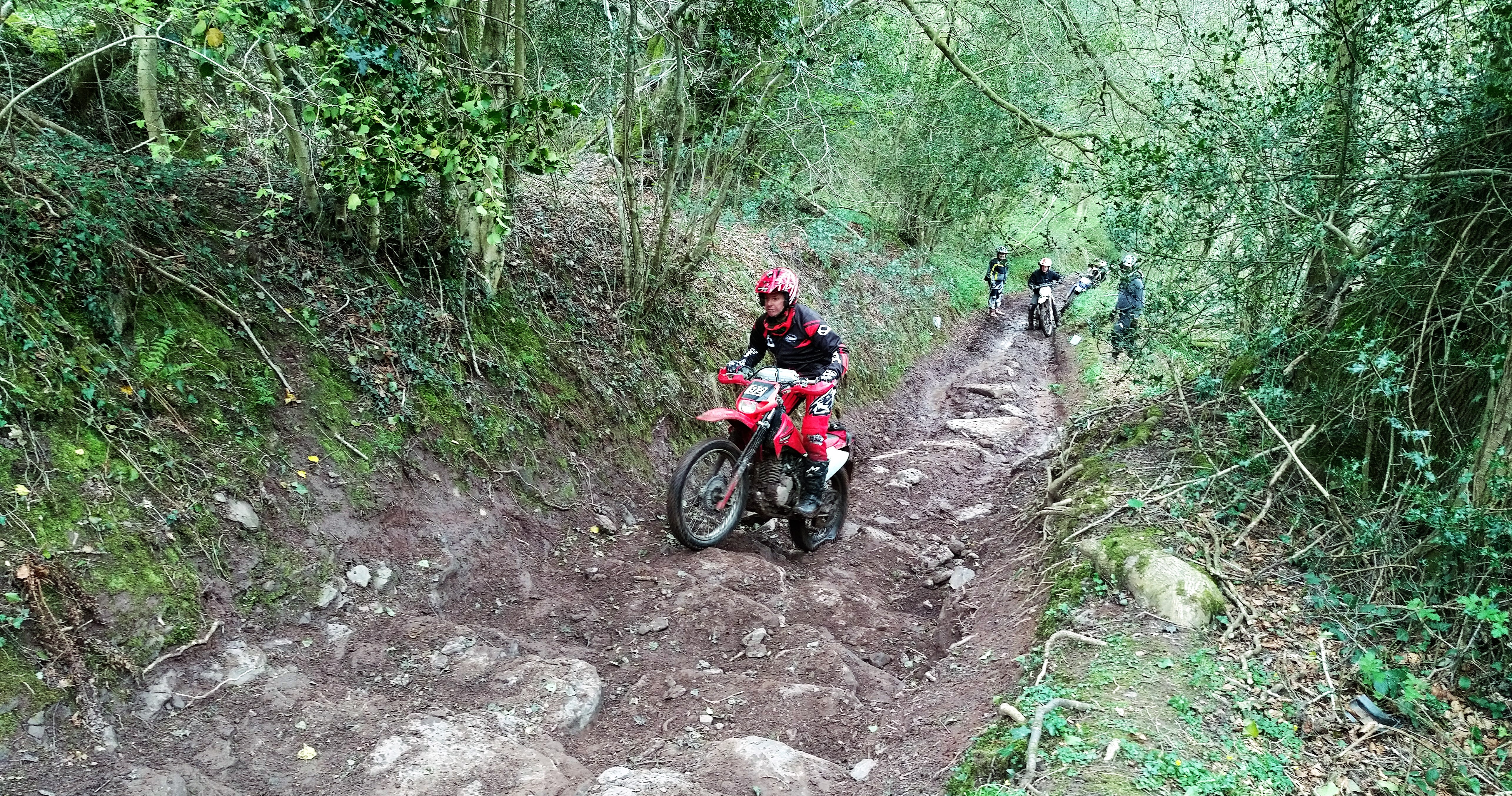 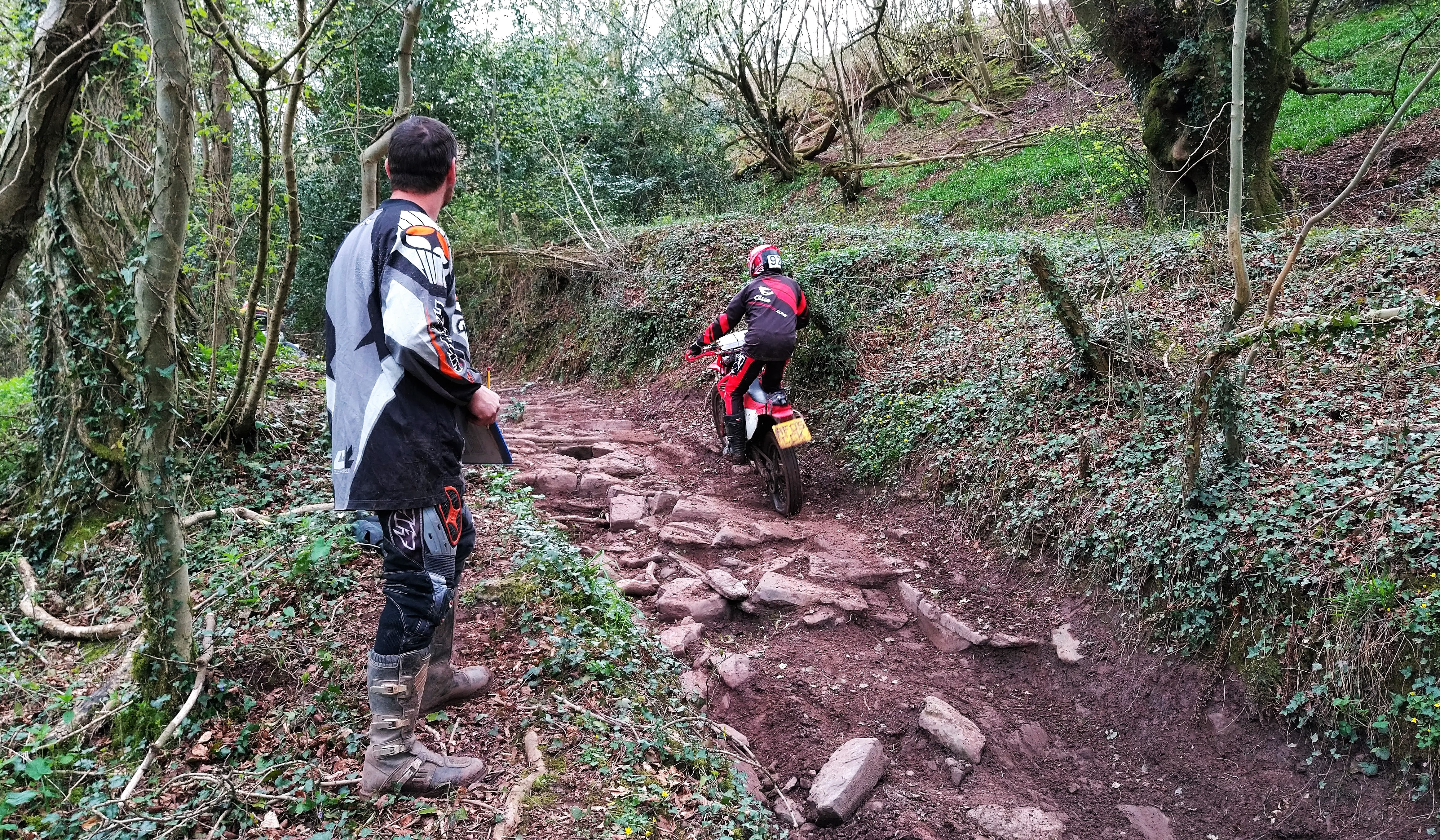 Soon we arrived at ‘Nannies’ one and two – a pair of sequential sections held on a bridleway with permission from the land owner. Unusually, this particular bridleway was unlikely to have seen any equine use in living memory due to it being little more than a rocky slot obstructed by trees – certainly not somewhere you would want to take a horse! 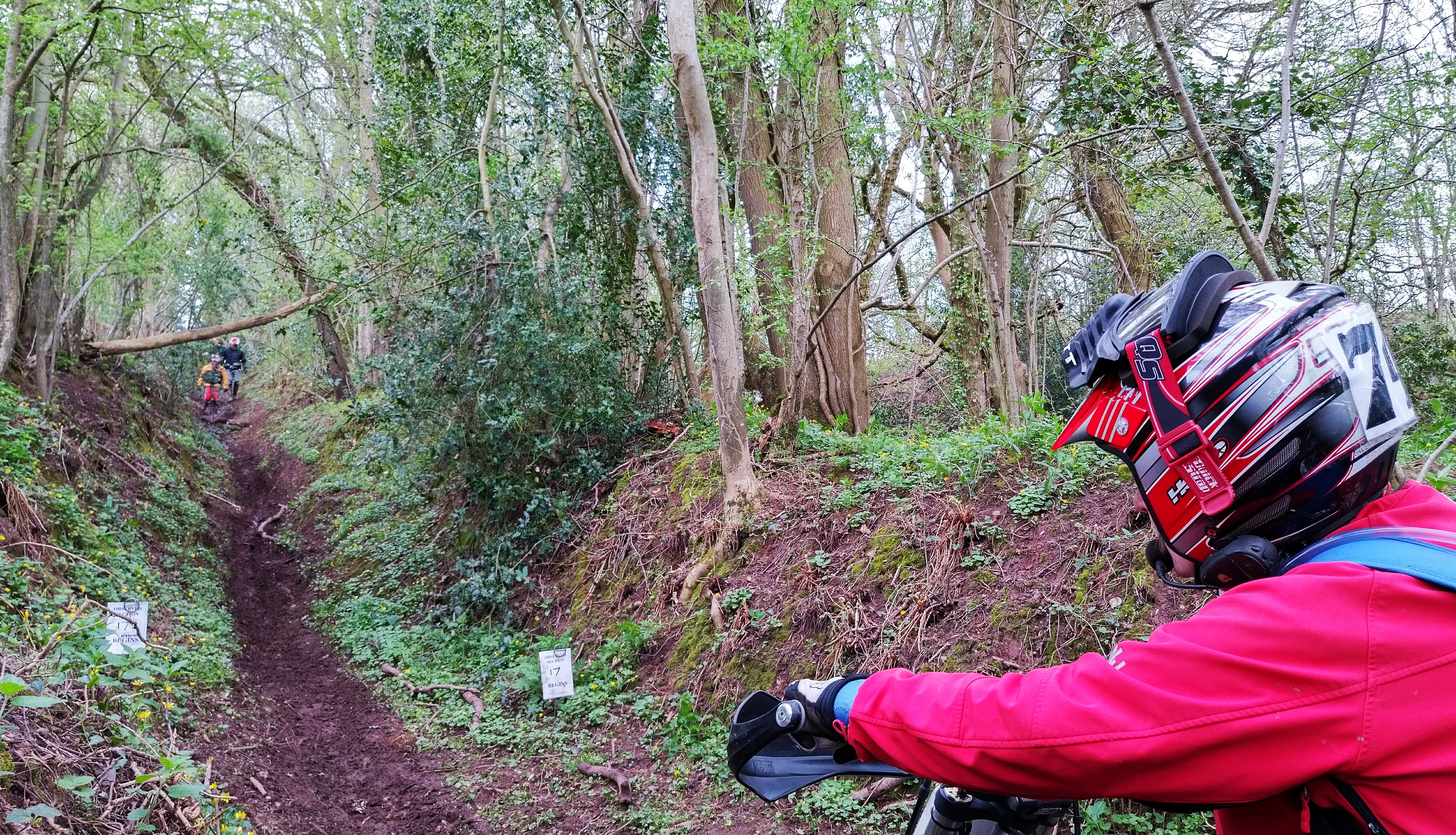 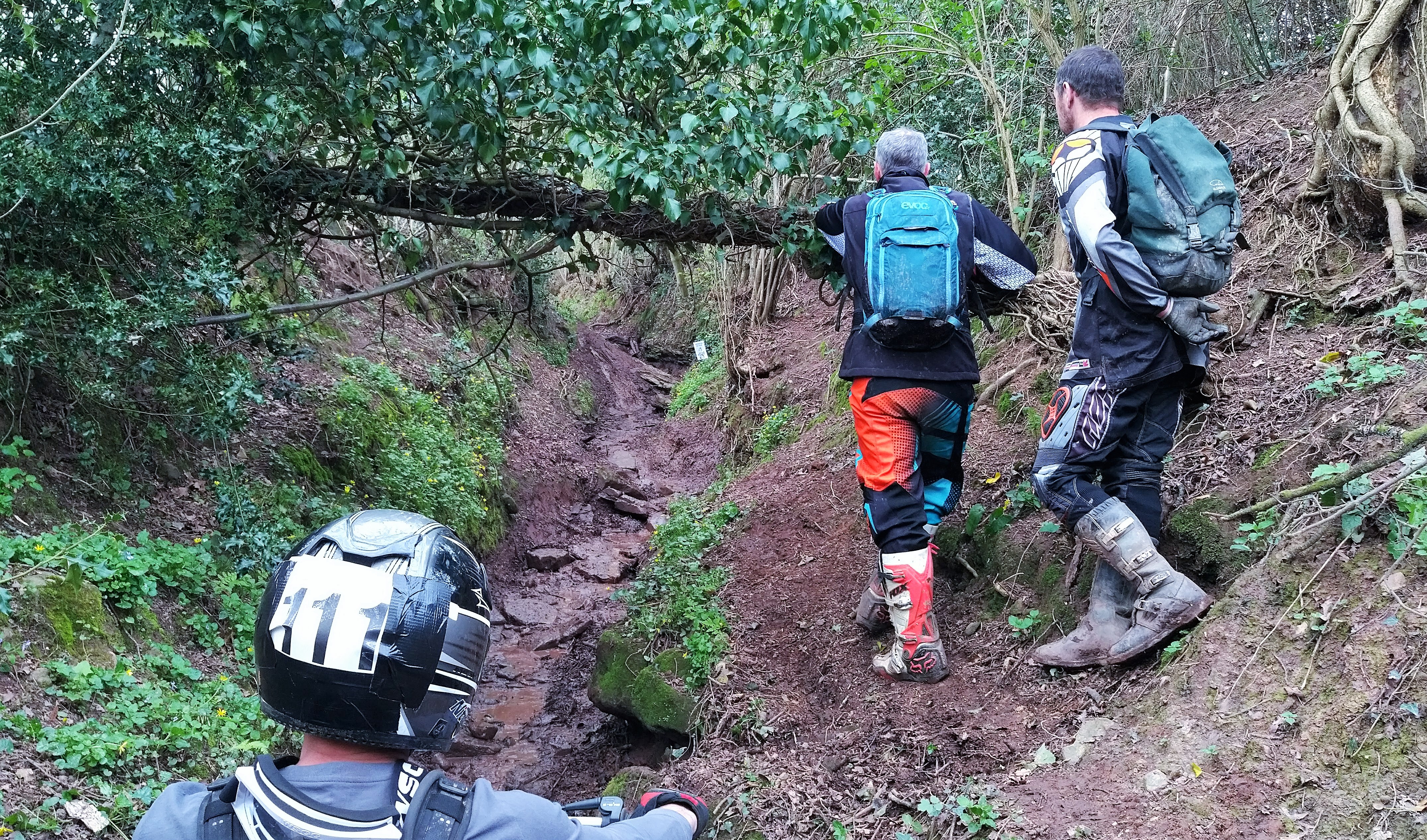 After a particularly scenic road ride south and a short section up a rocky stream we began to ascend the infamous Mill Road at Pant-glâs, home to a particularly unforgiving set of pre-Jurassic limestone steps which barely took a scratch as they contorted my footpegs. I later learned that several other riders had suffered the same fate, with one electing to make a field improvisation from a thin piece of wood secured to his frame with cable ties – good luck standing up on that! 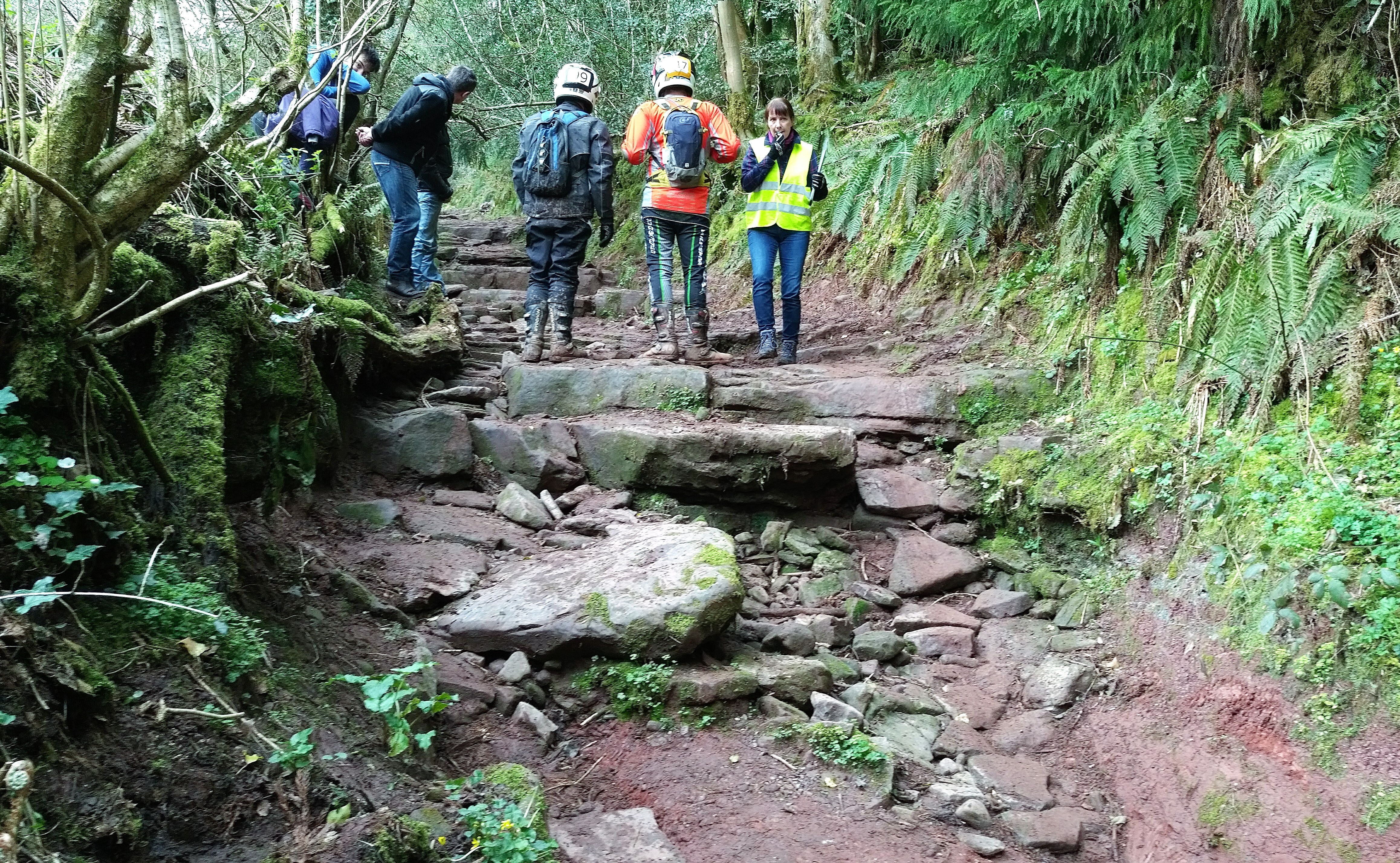 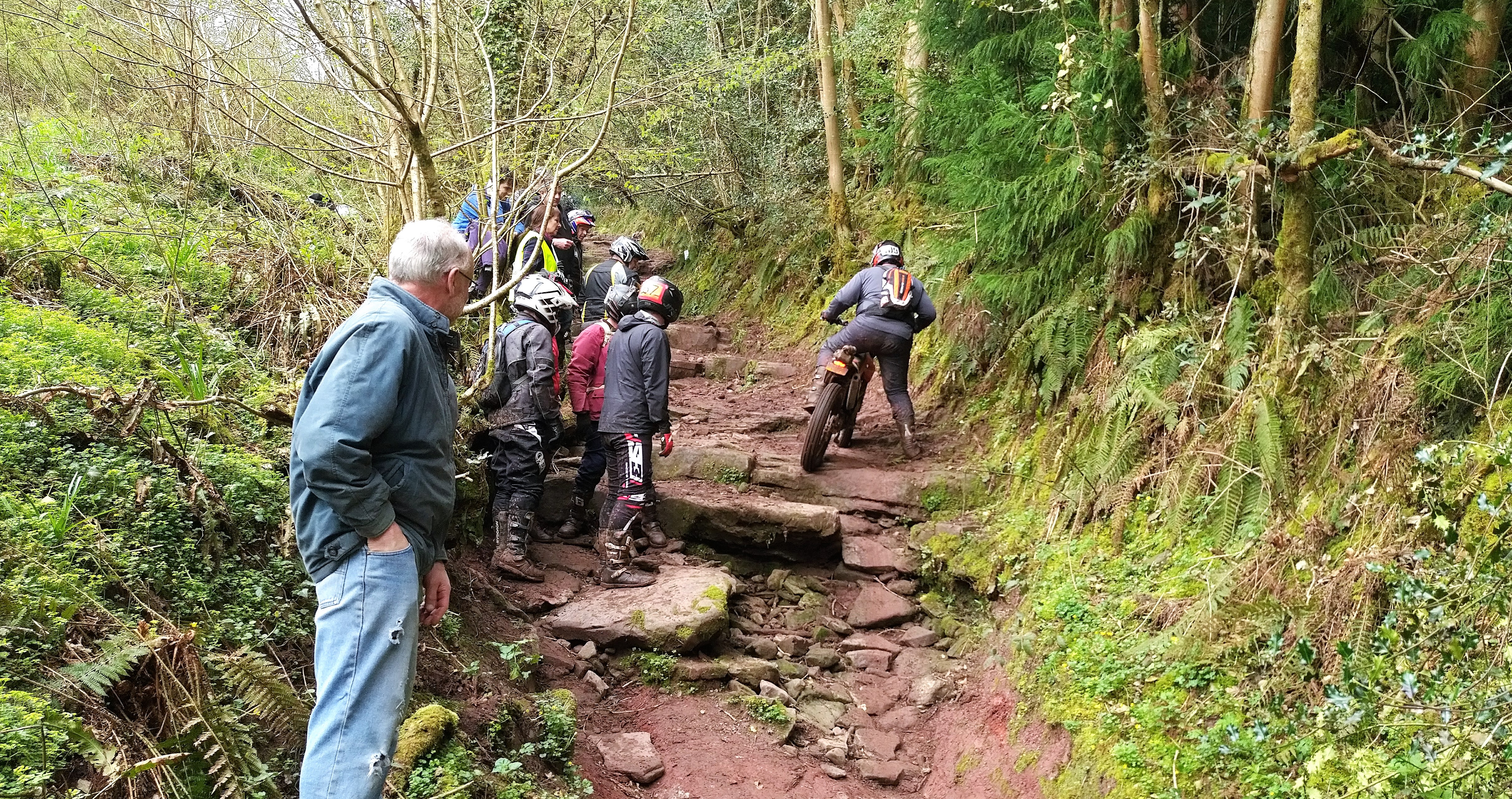 For many, the section is a 'stopper'. 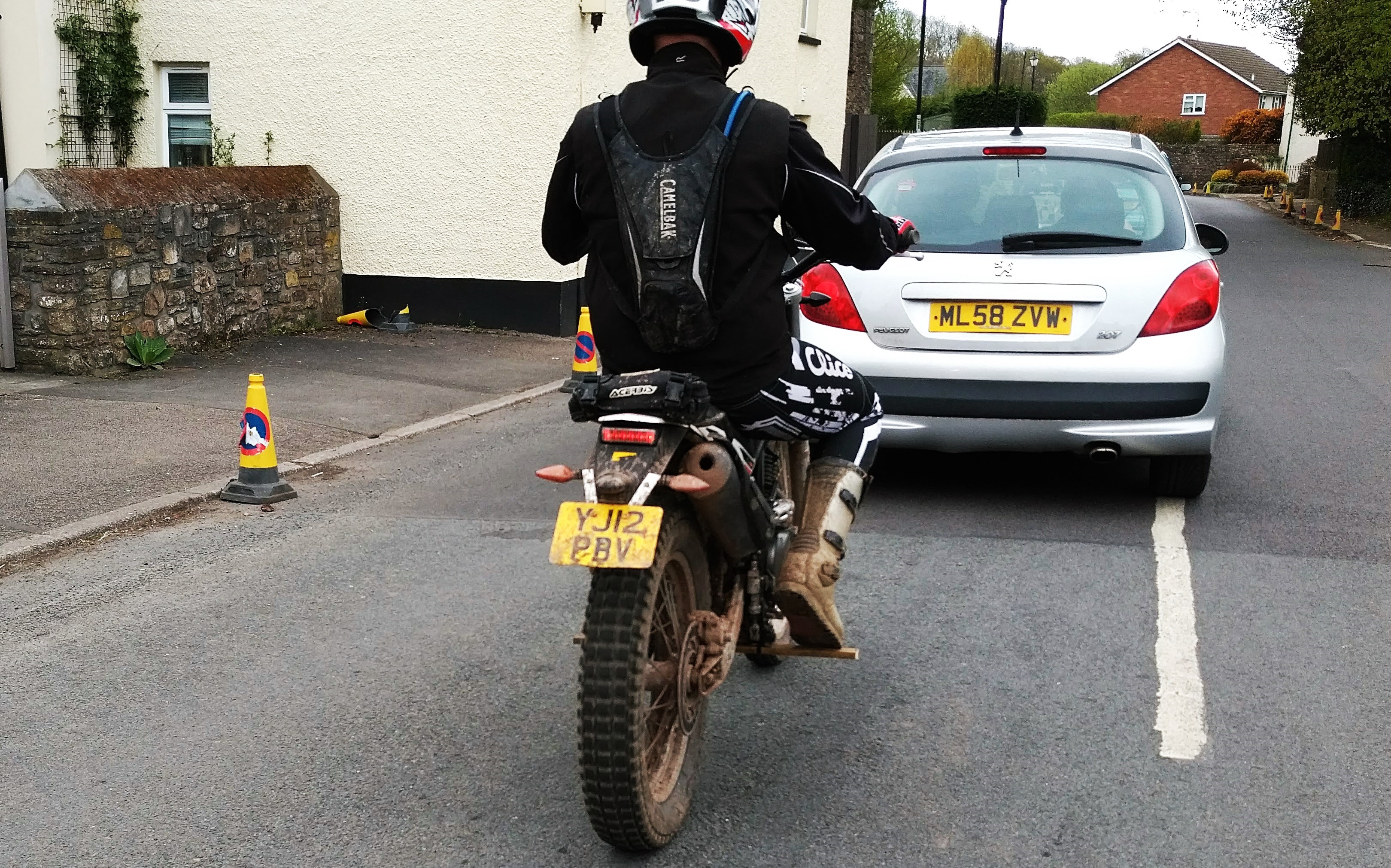 Footpegs took a battering during the event.

Sections twenty-two to twenty-five were held on green roads familiar to me, starting with ‘Devil’s Staircase’ on Robins Way, which when ridden uphill could well be the most challenging green road in the whole of England and Wales. A fallen tree at the beginning of the section necessitated an undignified limbo, which amused the observer no end. 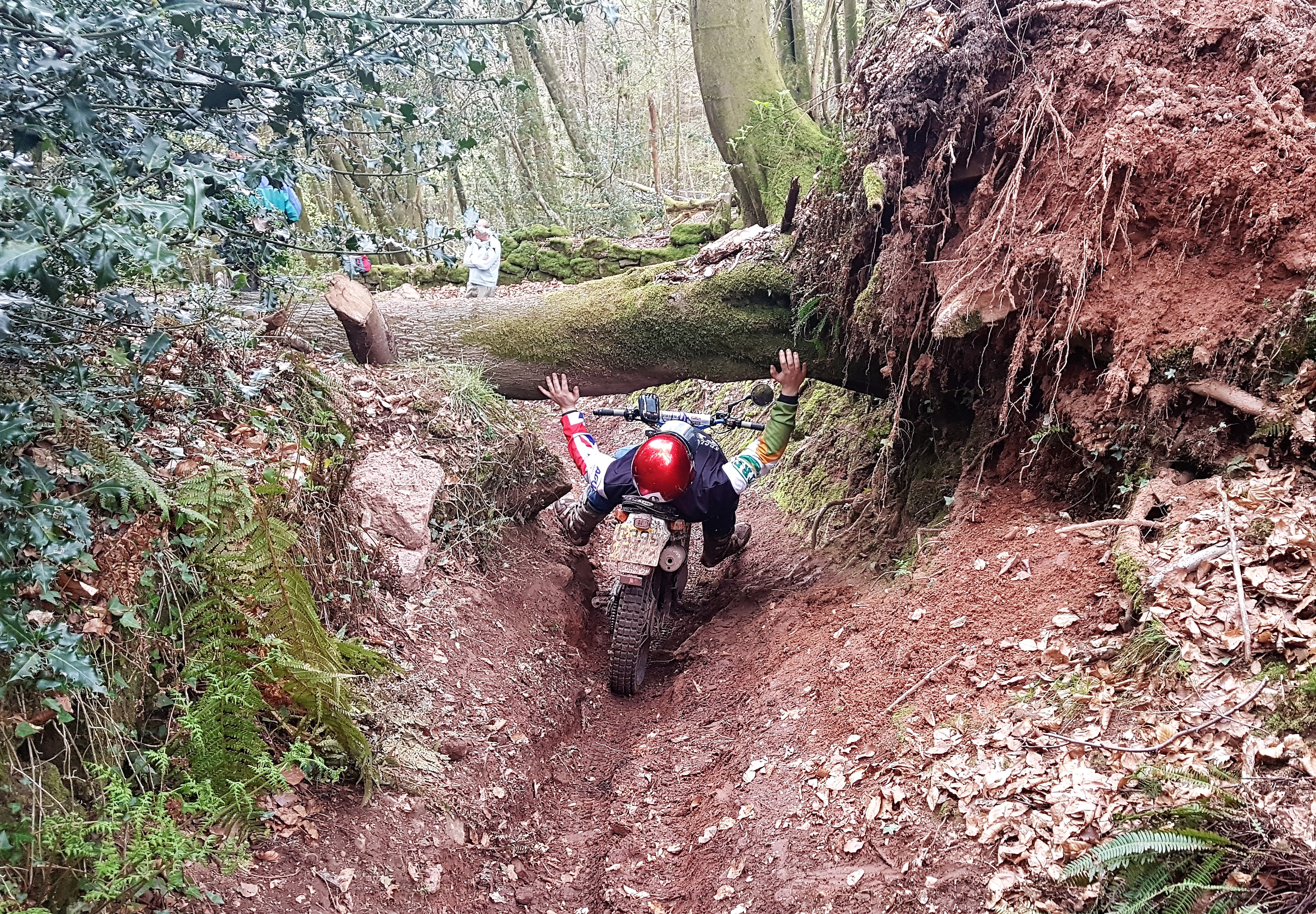 The author limboing the lane.

After ascending the greasy Meeks Hill we patronised a Beaver Scout selling homemade flapjack and freshly-pressed apple juice by the side of the road, though truth to be told our gluttony would have compelled us to stop for any number of similar enterprises.

A local struggling to carry his empty jar of scrumpy cider down the hill made for an amusing sight whilst we refreshed ourselves – particularly when the Beaver Scout gave him a knowing nod to pass by so that he could obtain his much-needed afternoon sustenance. 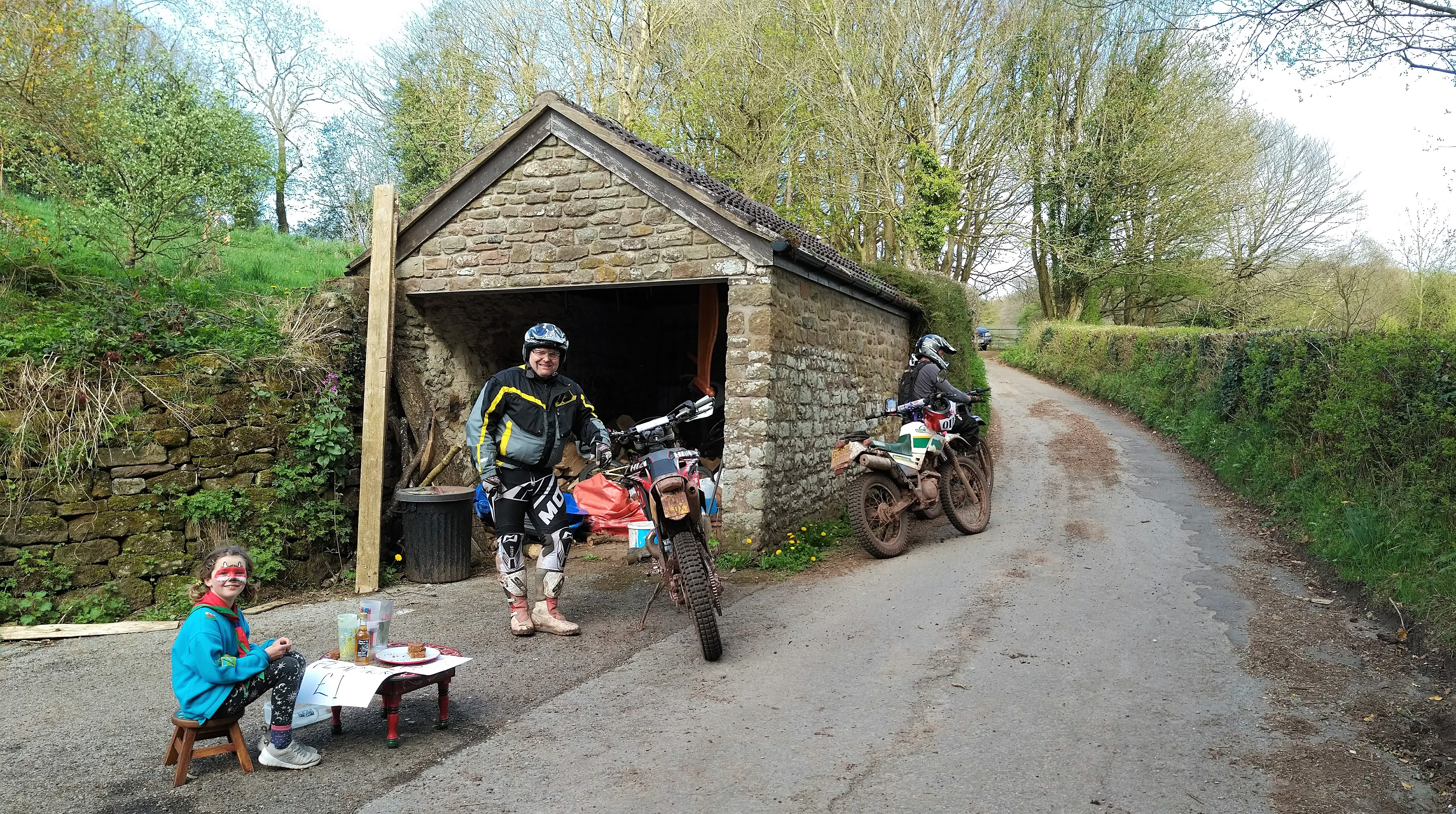 We re-crossing the Wye at Bigsweir Bridge and rode the tie-breaking special test on Wyegate Hill with gusto, managing to finish within a couple of seconds of each other. Unlike the rest of the trial this was a test of speed, so had to take place on private land. As it happened, four riders of the championship route managed to keep clean sheets so this section was used to establish their final positions. 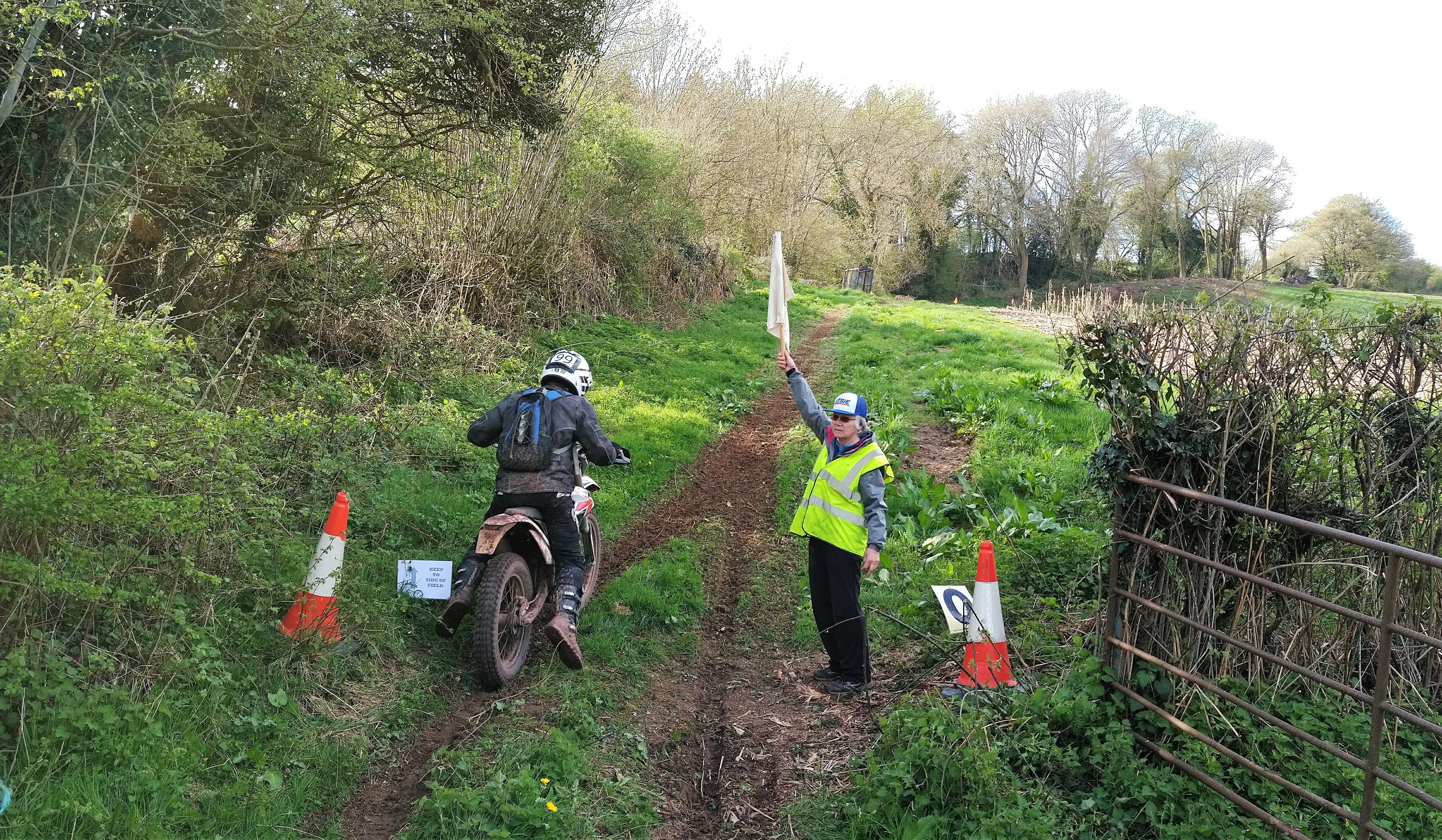 The start of the special test. 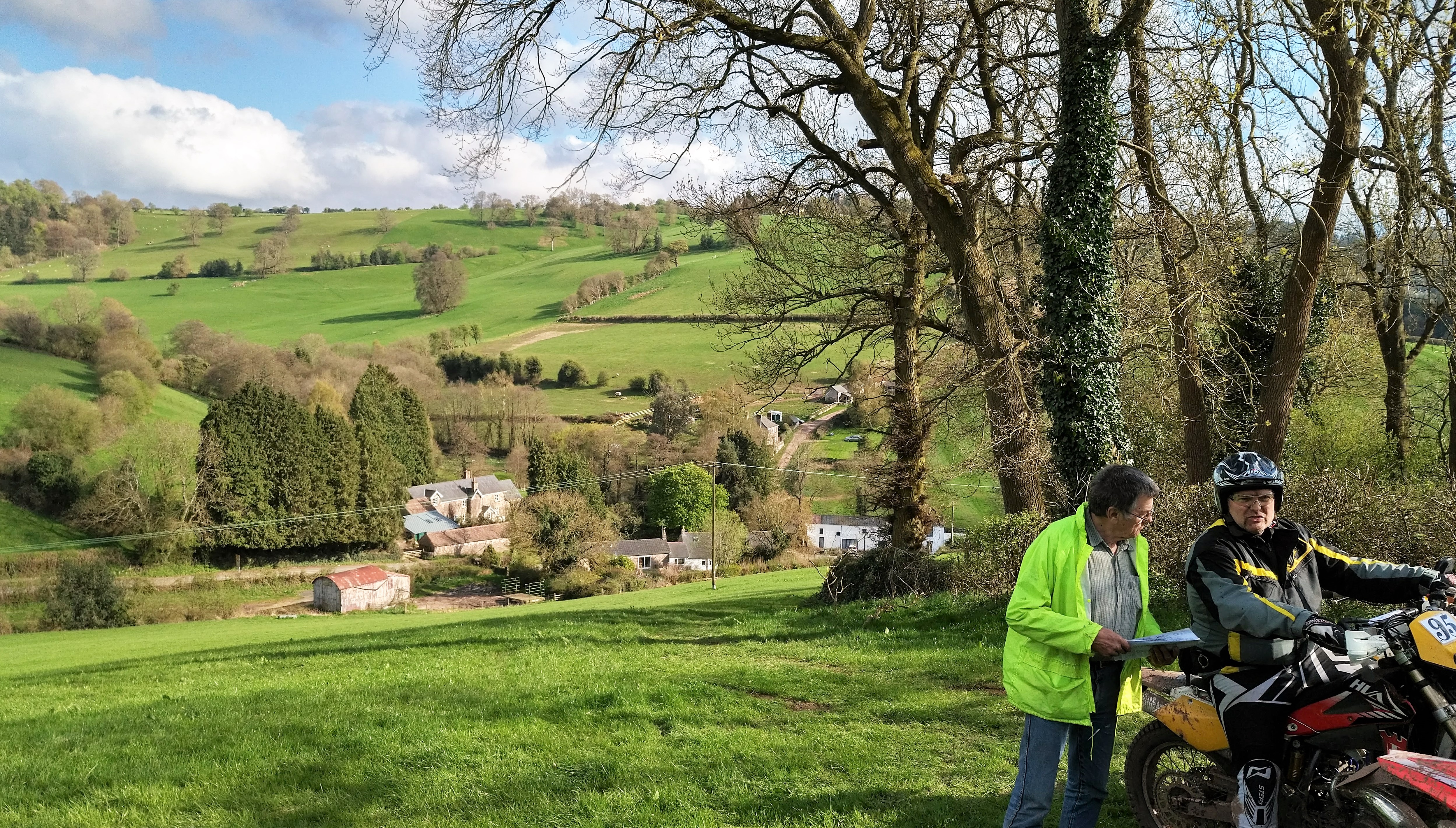 The view from Wyegate Hill.

The final sections were traditional twisting sections held in a private wood carpeted with wild garlic and bluebells, the presence of which always signify the start of spring for me. I observed the trail that the hundred-plus motorcycles had made through the garlic and speculated what ridiculous defamation the anti-access lobby would use to explain the sustainability of our presence. My money was on elves or goblins. 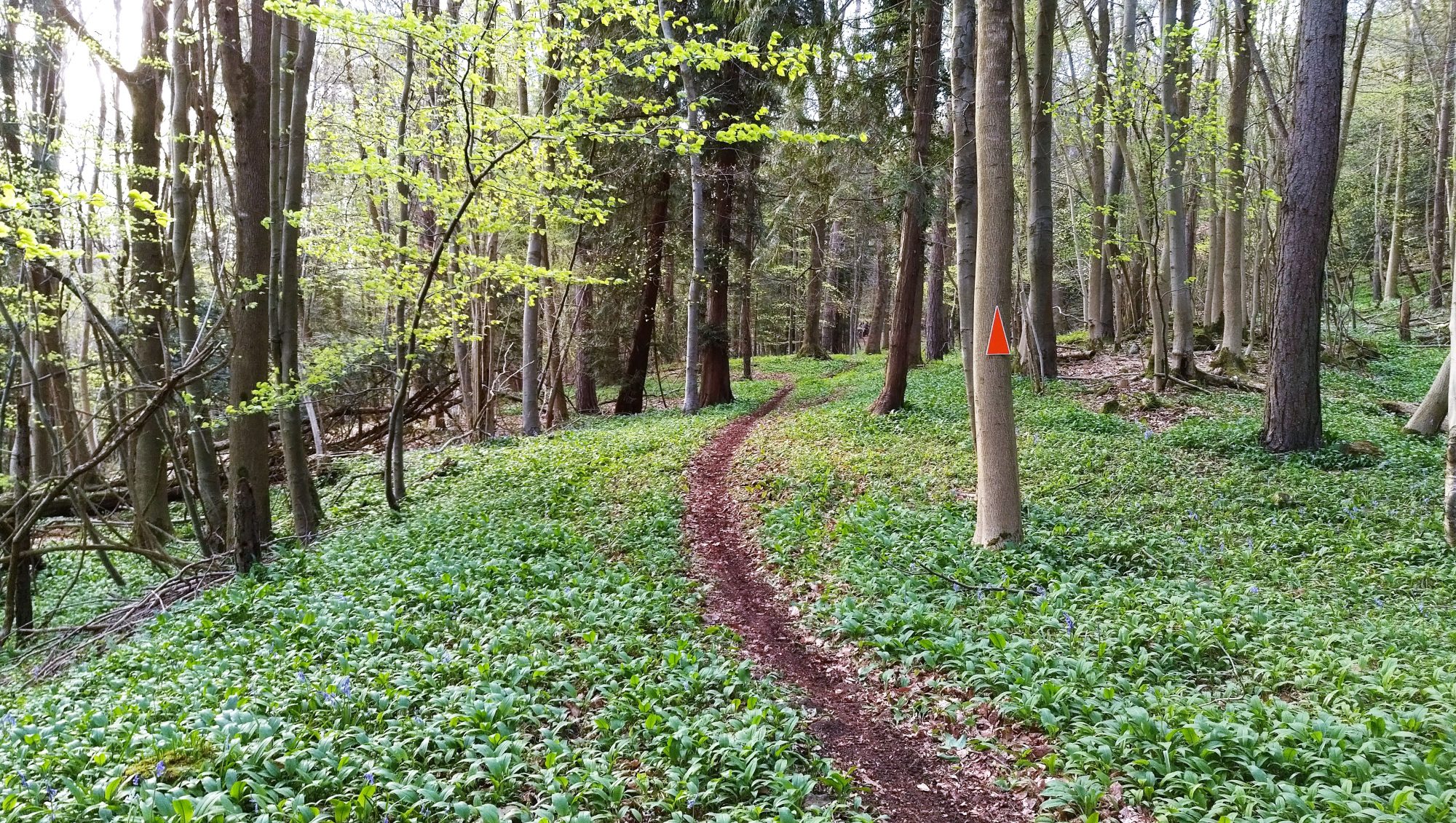 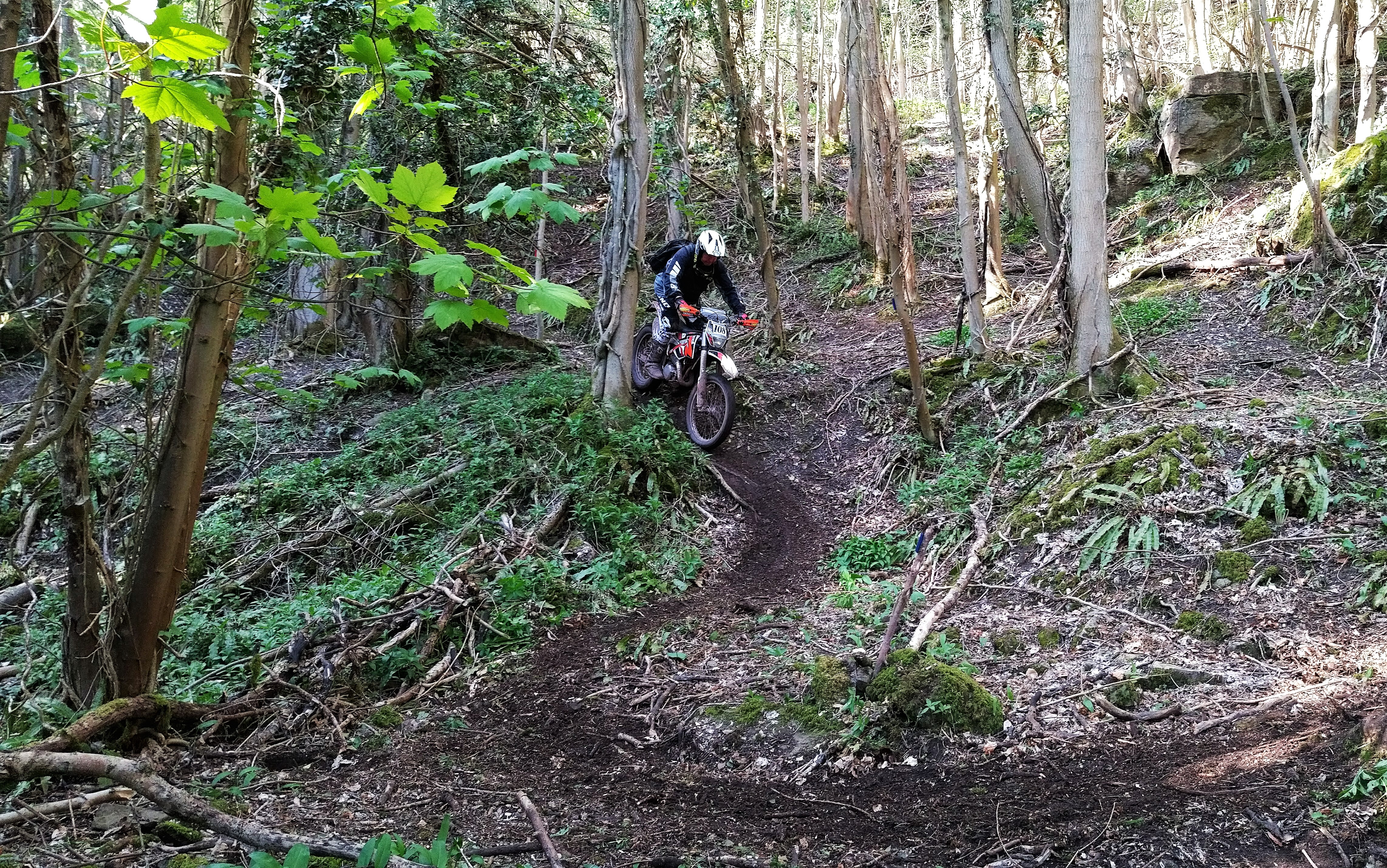 We arrived back at the pub in time for complementary pies and a well-earned drink. Paul had pipped Damien to the number twelve position by just three points and I was happy with cleaning ten sections on the battered old Yamaha that I had spent the winter refurbishing.

If you can pull away with both feet on the pegs then you can succeed at trials.

All that’s needed for TRF members to enter an event is an ACU trials licence, which is currently £10 per year.